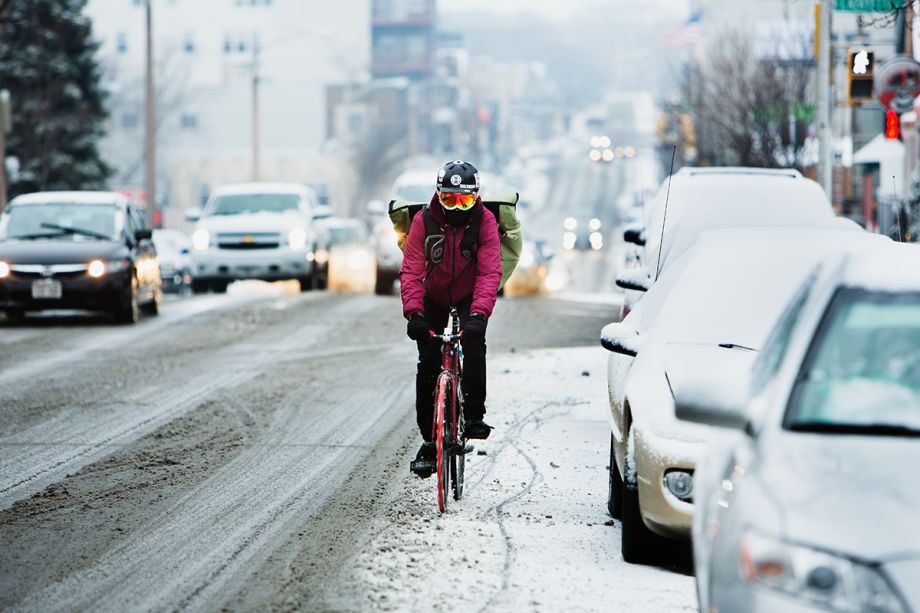 It’s 10 below freezing. The wind is whipping. Snow is starting to fall.

For a growing community of winter cyclists in Milwaukee, that sounds like the perfect weather to bring out the bike.

Year-round cycling is on the rise in the Midwest city — where winter lows can go south of zero. It’s a trend that debunks critics around the country who say bike lanes will only be used in fair weather.

Dave Schlabowske, deputy director at the Wisconsin Bike Federation, says he’s seen a drastic change in the last 15 years that he’s been biking to work through the winter.

“Back then, if I saw somebody I didn’t know biking in February, I’d email the six other people I knew who biked in the winter and tell them about it,” he says. “Now I see people out there all the time.”

In snowy months, the city government’s top priority for helping bikers is simply keeping the streets plowed, including the city’s 85 miles of bike lanes (almost 30 miles of which were put down in the last two years). Bike racks on the front of every city bus make it easier for riders to combine different modes of transportation.

“Winter’s just a fact of life in Wisconsin — it is what it is,” says Kristin Bennett, the city’s bicycle/pedestrian transportation coordinator. “People have the same travel needs no matter the time of the year.”

While the city doesn’t have data on winter bikers — it’s working to install bike traffic counters this year — anecdotally, almost everyone agrees winter biking is on the rise.

“It’s taken off,” Bennett says. “Everyone’s asking about them.”

Sales of fat tire bikes, which range from $250 to $5,500 in price, totaled $8.8 million across the country last year, the Milwaukee Journal Sentinel reported.

While he says overall winter business is currently slow at Crank Daddy’s Bicycle Works, co-owner Eric Kuhagen says more people have been buying winter gear and fat tire bikes than in past winters. Thick gloves and warm booties that go over shoes are among the top-selling items.

Milwaukee isn’t the only frigid Midwest city where bikers aren’t afraid of the winter. In her first proclamation in office last year, Minneapolis Mayor Betsy Hodges named January 3rd “Winter Biking Day,” calling Minneapolis cyclists “tougher and much better looking than bicyclists from all those wimpier cities.” And this year, for the first time, the streets department in Calgary has been directed to clear priority cycling routes when snow falls.

Not everyone is on board with the winter biking trend. “In the winter, it won’t even be used,” is a common refrain from many bike lane opponents. One upstate New York mayor suggested last year that winter bikers “should be arrested” because they’re putting others in danger.

Schlabowske says it’s the opposite — while commuting to work on his bike, he has helped drivers push cars out of ditches by the side of the road.

One small business taking advantage of the winter months is Flavor Cycle, a food delivery company that brings Milwaukeeans restaurant meals by bike. More orders come in as the temperature drops, and the company’s fleet of 18 contracted delivery people typically clock 30 to 40 miles every six-hour shift.

“When one day you’re out in subzero windchill, and the next day it’s 10 degrees, 10 degrees feels fantastic,” says owner Peter DiAntoni. He also jumps in the saddle to make deliveries. “Once you’ve hit the hardest part, everything’s easier.”

But like most winter bikers — and the rest of the city — Flavor Cycle will close shop during especially nasty snowstorms.

“Everyone who’s doing this job loves it, they love the challenge,” DiAntoni says, but “we’re not martyring ourselves.”