Resisting Big-City Capitalism Through Sisterhood ... and Pie – Next City 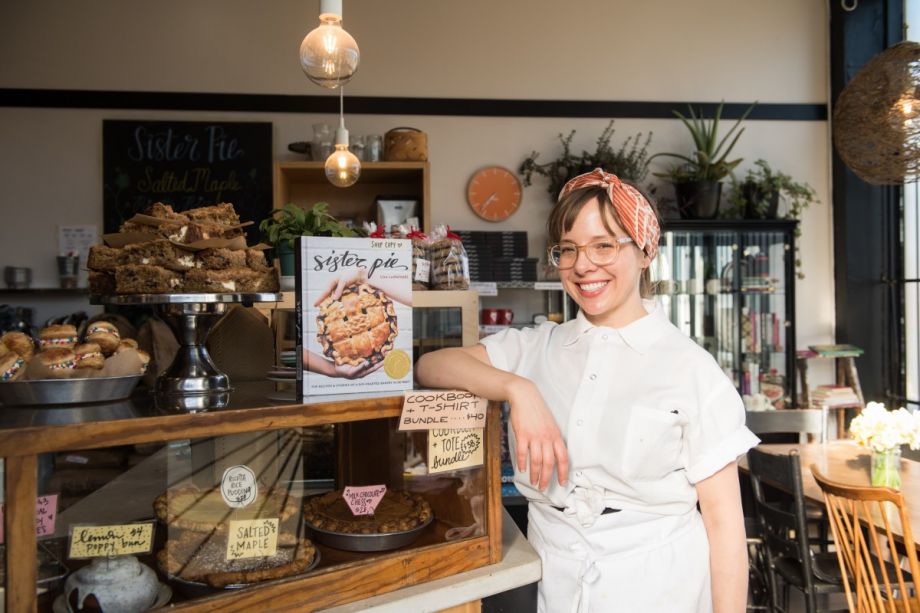 It’s 6 a.m., and the sun is rising over the bakery in Detroit’s lower east side. Within view of the entrance, a group of women prepares pie and pastries for the day’s patrons. At the front-of-house, coffee mugs, cookbooks, and Sister Pie branded merchandise fill the far end of the bakery. To the back is a line of heart-shaped papers containing names of past and present employees taped above the steel refrigeration units, where a “Black Lives Matter” magnet holds up a printed slogan mimicking lyrics from singer Mary J. Blige’s soul classic “Real Love.”

At first glance, Sister Pie looks like an ordinary bake shop, but for owner Lisa Ludwinski, it’s a neighborhood haven that challenges inequality in a city where equity doesn’t exist. Sister Pie combines work with politics, and Ludwinski says the business operates on a triple bottom line business model: people, profit and planet.

Ludwinski’s been on a roll since starting the bakery out of her parents’ kitchen in Milford, Michigan, in 2012. During her early days working out of a shared kitchen space in Detroit’s Midtown district, she fell in love with the city’s West Village neighborhood during delivery runs to the now-closed Parker Street Market. She opened Sister Pie in the same neighborhood in 2015, and has since written a cookbook, received a James Beard nomination, and landed in the archives of nearly a half a dozen national magazines. She now employs a staff of 16, most of whom are full-time. The majority of them are women. With plans to open a larger, second bakery on Mack Avenue about a mile north of the current location, Ludwinski shows no sign of slowing down.

At a 34.5 percent poverty rate, Detroit is the country’s poorest big city.

With nearly half of Detroit children living in poverty, the city’s wealth disparities and culture of inequality are generational.

“We definitely know and are very aware of the deep problems and economic problems that the city of Detroit faces,” says Ludwinski. “That definitely encourages and inspires us to make sure that we’re running a business that can serve folks and help with unemployment potentially.”

Detroit’s unemployment rate is 17.4 percent as compared to the 3.7 percent national average. The city’s schools are among the worst in the nation. More than 85 percent of students are eligible for free or reduced lunches. Over 20 percent of Detroit youth aged 16 to 24 are neither working nor in school.

In March, Sister Pie announced a year-long partnership with local high-risk girls and young women’s empowerment nonprofit Alternatives for Girls, which provides mentoring and support for young girls in high-risk activities or at risk of them. Ludwinski says the goal is to provide financial support and create awareness about AFG through the Sister Pie network. So far she’s hosted a half-dozen AFG youth at the bakery, taught them to make pie dough, and collaborated with the group to design a signature peanut butter and s’more-flavored cookie. Proceeds from the new baked goods will be donated to AFG.

Thanks to the arrival of new jobs, Detroit’s economy is rising. Poverty has decreased, too. But the bulk of its residents are left in the shadows of the resurgence.

“By in large that development is very unequal,” says Branden Snyder, executive director of Good Jobs Now, a local membership organization that fights for economic and social justice for low-income Detroiters. “When you look in a lot of neighborhoods, you don’t see that any sort of economic development is happening.”

According to local nonprofit Data Driven Detroit, the majority of jobs paying $40,000 or more go to non-Detroit residents. Most recent estimates state that nearly 70 percent of Detroit jobs are held by individuals living outside the city. This is compared to 54 percent in New Orleans, 67 percent in Baltimore, and 82 percent in Newark.

For Detroiters who do benefit from the wave of new jobs, many are relegated to low-wage security and janitorial roles.

Sister Pie is the opposite of that.

“There’s a social justice element to our business,” says Ludwinski. “We’re trying to realize that through creating and growing and thinking about radical business concepts that challenge traditional capitalism and the patriarchy.”

Ludwinski hires staff at $12 per hour on average, nearly 27 percent higher than Detroit’s minimum wage of $9.45 per hour; provides health insurance; offers paid sick time and a local gym membership; and gives employees free meals at work in addition to a take-home pie every month.

As a small business owner, Ludwinski’s a far cry from employing an entire city, but she says she’s committed to giving jobs to Detroiters who need them. As a hiring practice, Ludwinski posts job opportunities on the windows of the bakery. Openings are advertised on neighborhood listservs and Nextdoor, a social network for neighbors, too. At Sister Pie, having experience working in the food industry isn’t a requirement. Ludwinski says prior knowledge is helpful, but that there is also value in an employee whose experience in the neighborhood can help Sister Pie better serve the community. More than half of her employees live within walking distance of the bakery.

“[Employment] is one of the major ways small businesses contribute to equity in our city,” says Lily Hamburger, director of small business retention and attraction at the Detroit Economic Growth Corporation.

“The small businesses in our neighborhoods are the on-ramps,” she explains.

Hamburger adds that small businesses are connected to the community, often provide first jobs for individuals entering the workforce, and are accessible to workers returning from parenting and incarceration.

Small businesses created 1.9 million jobs in 2015, according to the SBA Office of Advocacy. The largest gain, 1.1 million net jobs, came from businesses with less than 20 employees.

Sister Pie supports the local economy through its sourcing of ingredients, as well. Ludwinski bakes fairly exclusively with ingredients from local farms in the summer, including Detroit’s Eastern Market, Beaverland Farms, Coriander Kitchen and Farm, D-Town Farm, and Keep Growing Detroit and their network of growers. She buys edible flowers like marigolds, calendulas, and bachelor buttons from Coriander, mixed greens from Beaverland, and mushrooms from The Mushroom Factory.

And Sister Pie supports the neighborhood. They offer a 15 percent discount to senior citizens and residents of the neighborhood, free pie-making classes for locals, and “Pie-it-Forward,” which allows customers to pre-pay for a slice of pie in exchange for a fork slip that they can pin to a bulletin for a stranger to enjoy.

“We try to make sure what we do here is accessible to everyone,” says Ludwinski. “Regardless of where they come from or how much money they have.”

“As we continue to grow, we’re really hoping to have conversations with folks in our area about what they want in a business, and what they’re looking for in their neighborhood,” she adds.

In the midst of big-city capitalism, Ludwinski’s humble about her role in building an equitable Detroit. She lives in the community she serves, values her employees, and commands her bakery at the intersection of food and social justice.

“She’s a pretty self-made business owner,” says Hamburger. “She’s done a lot of this by her own grit, determination and leadership.”

Hamburger says that there are other businesses in Detroit that share Sister Pie’s local sourcing and triple bottom line practices — Brooklyn Street Local, Good Cakes and Bakes, and Folk and The Farmer’s Hand — but that those type of business choices come with tradeoffs.

“Expenses and revenue are competing every day in every business, and things like health insurance, fair wages, and responsible sourcing often mean some sacrifices on profit; but it also means you’re building something driven by your values that can result in greater revenues if customers can see and believe in what you’re doing,” Hamburger wrote in an email. “If your values are to make as much money as possible, or to be the fanciest restaurant in town, you’ll make different business choices than those Lisa is making for Sister Pie.”

Ludwinski insists that her days aren’t interesting, but it’s what social responsibility looks like.

“It might be a little more boring than you thought,” she jokes, preparing a tray of cookies for the oven.