Five Reasons Solar Will Power the Future – Next City 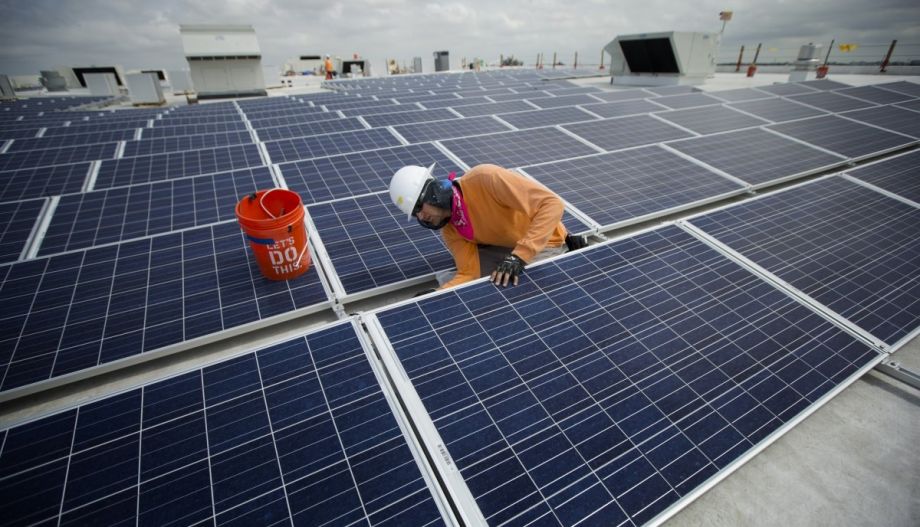 Workers install solar panels on the roof of an Ikea in Miami. (Photo by AP / J Pat Carter)

Just a short time ago, solar power was a groovy little niche industry in the broad field of energy generation. But something happened in the last couple years: solar began making strides toward a future in which it will challenge — and perhaps out-compete — other types of energy. Here are five reasons the future of solar is bright indeed.

Demand Has Never Been Higher

Most industries would salivate over the solar sector’s current growth. Last year, demand for solar power in the U.S. increased by 41 percent, making it the second-biggest new source of energy generation after natural gas. Residential projects leapt even higher, surging 60 percent over the previous year. Overall 4.75 gigawatts of photovoltaic panels were installed in 2013, enough to power over three-and-a-half million homes. It was, according to industry analysts, a pivotal year. “2013 offered the U.S. solar market the first real glimpse of its path toward mainstream status,” one expert told Time magazine. And the growth shows no signs of stalling: in August, Merrill Lynch issued a report to investors advising them to pour their money into solar stocks, which the firm expects to soar in value over the next three years.

Panels Are Cheaper Than Ever

How many products can say they’re getting cheaper by seven percent per year? That’s the cost trajectory for solar voltaics according to John Farrell, director of the Energy Self-Reliant States and Communities program at the Institute for Local Self-Reliance. “100 million Americans in the nation’s largest cities will be able to ‘go solar’ for a lower price than grid electricity in the next ten years,” predicts his 2012 report Rooftop Revolution. In fact, according to Forbes, solar is already cheaper than utility power in several states on a dollar-per-kilowatt-hour basis — it’s only installation costs that keep it more expensive overall. But those installation costs may soon fall. Aiming to make solar energy cost competitive with other forms of electricity by the end of this decade (a cost the government identifies as six cents per kilowatt hour), the U.S. Department of Energy has launched the SunShot initiative, an array of efforts to drive down the cost of installing and maintaining solar panels.

China is Part of the Reason It’s Getting So Cheap

Complicating the view of China as a rampant polluter, a major reason that solar is growing the world over is thanks to cheap Chinese panels. Subsidies from the Chinese government have helped companies in that country capture half the world’s solar panel manufacturing market, up from 20 percent in 2008. This may be bad for American businesses — and indeed, in June the U.S. Commerce Department imposed steep tariffs on Chinese-made panels — but overall, it’s China’s cut-rate prices that are helping Americans afford to go solar. And China shows no signs of slowing its output — one analyst called the scale of the Chinese market “astonishing,” adding that “PV [photovoltaics] is becoming ever cheaper and simpler to install.”

Big Business is Falling in Love With Solar

From Apple to Costco, virtually all of the biggest U.S. corporations are making investments in solar power in one way or another. From 2012 to 2013, commercial deployment of new solar installations grew by 40 percent, with over 32,800 facilities utilizing solar energy. And they’re not using just a little bit of it, either. A survey of the Fortune 100 companies by the Solar Energy Industries Association found that the top 25 had increased their solar capacity significantly, from 300 megawatts at 730 facilities in 2012 to 445 megawatts at 950 facilities in 2013. That means that those businesses are no longer just taking a chance on solar — they’ve seen its performance and decided to double down on it. And the corporation installing more solar panels than any other? By far and away, it’s that evil nemesis of liberal activists everywhere: Walmart.

Even the Tea Party Loves It

Republicans dislike big government as much as they love private enterprise, which is why they’re warming to the idea of a decentralized, free-market-driven solution to our energy needs. Solar fits that paradigm perfectly. One Tea Party leader described solar energy as “a free market issue that gives consumers more choice.” And with broad public support for solar power — one survey found 92 percent of Americans want to develop more solar energy — conservative politicians have no choice. “Republicans who oppose solar in the next election, they’re going to be wiped out across the board,” one GOP strategist told The New Republic.