Public Ownership Is Making a Comeback in the U.K. – Next City

Public Ownership Is Making a Comeback in the U.K. 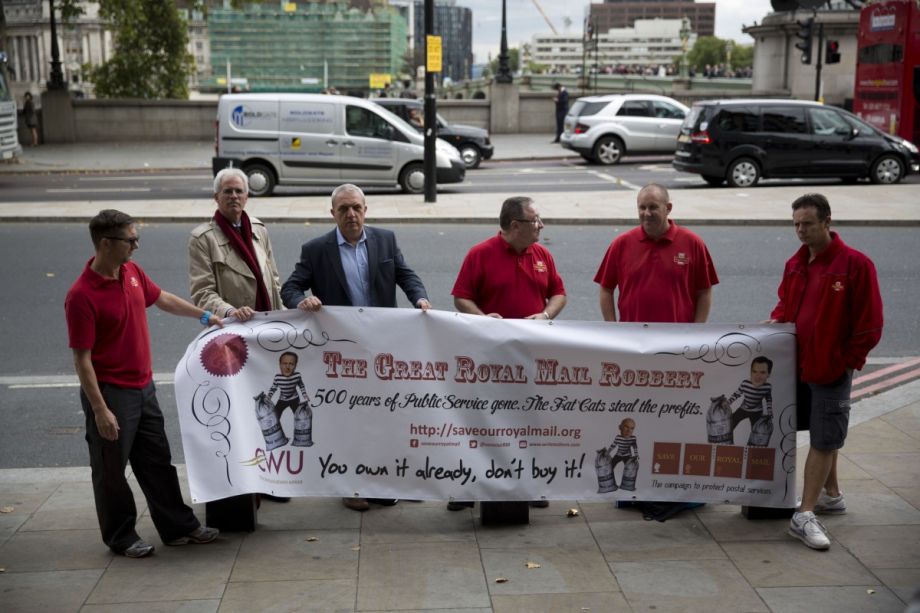 Royal Mail workers in the U.K. took part in a protest against the privatization of the organization, in London in 2013. (AP Photo/Matt Dunham)

The following is an excerpt from “Reclaiming Public Services: How cities and citizens are turning back privatisation,” published by Transnational Institute (TNI).

For several decades, we have been told that outsourcing, privatisation, public-private partnerships (PPPs), and financing schemes, such as private finance initiatives (PFIs) in the UK, are the only options for local authorities in a context marked by more responsibilities and less resources. But evidence is growing that such policies are bad for public budgets in the long term, and lead to poor services and a loss of democratic accountability. As a result, many local authorities are now looking to remunicipalise public services.

The trend of remunicipalisation has even reached the UK — the home of Thatcherite ideology and an island asserting its independence through Brexit. As elsewhere, the need for cost savings and control over quality have been major drivers for bringing services into public ownership.

Over the last decade local authorities in the UK have carried out significant remunicipalisations, or created new services, most notably in the energy and public transport sectors. Metro schemes have been brought in-house in London, Newcastle and Birmingham, and the UK is seeing its first municipal energy companies set up by local authorities to deliver affordable power for communities. in Nottingham, Bristol, Leeds and Scotland.

Nottingham City Council (population 532,000), for example, decided in 2015 to set up its new supply company because it found that many low-income families in the city were struggling to pay their energy bills, and that the creation of a municipal company was the best way to help them. Named Robin Hood Energy, after the local medieval outlaw famous for robbing the rich to give to the poor, the company offers a cheaper service because it does not extract large profits of one kind or another, and it does not confuse customers with complicated tariff packages. As the company puts it: “No private shareholders. No director bonuses (…). Just clear transparent pricing.”

The company has the cheapest prices in the UK for people on pre-payment meters (that is, households who have been unable to pay their bills and so have to pay in advance for their electricity by feeding a special meter with coins or credit), and new tenants moving into council houses are placed with the company by default. There is already a significant market impact beyond the company’s own customers: the average cost of energy in the East Midlands region, where Nottingham is located, is now the cheapest in the country.

Councils across the country are bringing services in-house when contracts fail, including highway maintenance, housing, waste, cleaning services, IT and human resources. Meanwhile a number of local authorities have chosen to buy themselves out of public-private partnerships (PPPs) for hospitals and other key services, years before the official contract end date. Services are often brought in-house without too much fanfare. However, the stories above add up to a rejection of privatisation on the ground, as local government (if not national government) discovers its failures.

Public opinion in the UK strongly supports running services for people not profit – polling shows that both EU Leavers and Remainers want public ownership. This popular mood is finally being reflected in mainstream politics. For the 2017 election, the Labour party embraced public ownership of the railways, energy, water, buses, council services, Royal Mail and the National Health Service (NHS) – making a decisive break with the ‘third way’ Blairite years. Campaigns like “We Own It” are using examples of remunicipalisation to show that privatisation is not inevitable. It can be reversed or made irrelevant as local public companies displace multinational corporations.

Since the 1990s, the UK has introduced an extensive range of PPPs under the Public Finance (PFI) programme. By 2011 the programme had become thoroughly discredited, rejected by a series of parliamentary reports and even right-wing media, such as the Daily Telegraph. Many PFI projects have run into major problems and more than 30 have been terminated. The factors behind these terminations have included public pressure, financial collapse and the identification of savings from direct public management control. The PFI projects represent roughly 5 per cent of all PPPs in the UK, but because they include some of the largest their value totals an estimated 25 per cent of all PPPs, a very high proportion.

These terminations have often resulted in the remunicipalisation of public services, including:

Alongside these encouraging returns to public ownership, the current (May 2017) Conservative government continues to press for further privatisations. The most damaging and largest of these policies is the systematic attempt to outsource as much as possible of the NHS. The government has also privatised the Post Office in the last three years. But other smaller privatisation plans have been defeated, for example plans to sell the Land Registry and the second public TV channel, Channel 4.

But overall, this period has seen the emergence of stronger forces toward creating a new public sector. There are three political factors suggesting that this trend will continue. Firstly, public opinion in the UK is strongly in favour of public ownership of rail, energy, water and other services, and against the continuation of privatisation by PPPs and outsourcing of the NHS. This is based on bitter experience of rising energy and water prices, rail accidents and failure of the private sector to invest, but also on a new confidence in the future of a new public sector. One outcome of this is the creation of a highly successful national campaign, called We Own It, which provides for the first time a consistent and coherent voice for public ownership. The campaign has produced a summary of the case specifically for the general election campaign of June 2017, and a website with detailed information on each sector.

Secondly, the polarisation of the Brexit referendum has shown how many people in Britain now reject the complacent establishment politics of austerity. But polling shows that the support for public ownership of these services is equally strong among those who voted to leave the EU in the Brexit referendum and those who voted to remain. This opens two positive possibilities: to offer public ownership as a progressive alternative for people to reclaim control over their lives, the planet and the economy, and so reclaim popular support away from the xenophobic, nationalist right. And as a result of the Brexit decision itself, there is also the possibility of reshaping the public sector without the constrictions of EU policies on internal market, state aid, fiscal and macroeconomic policy dogmas.

Thirdly, the left leadership of the Labour Party under Jeremy Corbyn is, in effect, trying to convert one of the declining social democrat parties of Europe into a new left party like Podemos in Spain or Syriza in Greece, rejecting neoliberal austerity and privatisation politics in favour of transparent, democratic, community-based government. The Labour Party 2017 election manifesto included a commitment to return railways, energy, water and postal services to public ownership – which may have helped them to capture more support than any other party among voters under the age of 40. The election of 8 June produced a huge swing to the Labour Party, partly due to this clear commitment to extending public ownership. The political trend in the UK is now moving strongly against privatisation.

David Hall was the founding director of Public Services International Research Unit (PSIRU) at the University of Greenwich from 2000 to 2013. He is now a visiting professor at the university. Cat Hobbs is the founder and director of We Own It, a new organization that is a voice for public ownership.