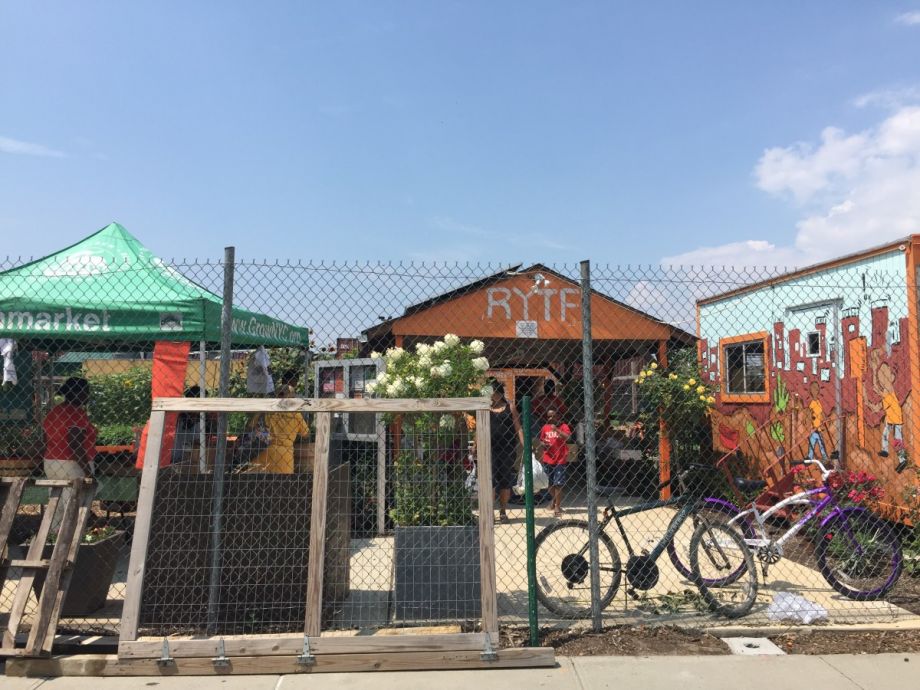 The Rockaway Youth Task Force has a long waiting list of families who want spots in its community garden, but more of those aspiring harvesters might be tending fresh veggies soon thanks to a new crowdfunding effort by the New York City Housing Authority.

“My vision for the organization is to provide young people the tools that they need to advocate for themselves,” says Milan Taylor, who founded Rockaway Youth Task Force in 2011 and was born and raised in the Rockaways, a beachside community at the far southern edge of New York City.

Most of the Rockaways was a food desert before Superstorm Sandy hit New York in 2012, and after the storm, access to fresh, healthy foods only got more limited when some retailers didn’t recover. “At the same time there’s plenty of fast food options around,” Taylor says.

Wanting to help residents take things into their own hands, Rockaway Youth Task Force created its first community garden, right across the street from one of the city’s largest public housing communities, Ocean Bay (Bayside) Apartments. No one expects the gardens to meet all the participating families’ food needs, but Taylor estimates that, on average, each raised bed produces some $500 worth of food per year. What families don’t need, they may choose to sell through an onsite community market.

There are 70 families on the waiting list, according to Taylor. Many are from Ocean Bay. However, a plan to build two new community gardens on the Ocean Bay grounds, adding 40 new raised beds for growing, should shorten that list significantly.

To pay for the project, the group tapped into a new partnership between NYCHA and crowdfunding platform Ioby to raise nearly $30,000.

NYCHA’s sustainability agenda defines the authority’s environmental health and sustainability goals for the next 10 years, and outlines several strategies to achieve those goals — including the creation of an online “Ideas Marketplace” for resident-led and community-led initiatives.

“Having a very visual place for all these projects to live, and the transparency, creates an ability for residents to reach out to each other and exchange ideas,” says Vlada Kenniff, NYCHA’s director of sustainability programs.

While NYCHA is making other large-scale capital investments in sustainability, such as putting solar panels on top of 20 buildings at Ocean Bay, there are many smaller projects that Kenniff says would be meaningful for residents and often led by residents but don’t require enough funding to make it worth moving the mountain of bureaucracy that is the nation’s largest local public housing authority. NYCHA communities are home to some 400,000 residents, including 4,000 at Ocean Bay alone.

“There are large investments happening on the capital side, but these are smaller projects,” Kenniff says. “There may not be funding for it from NYCHA central, but they’re needed.”

In terms of getting approval from the massive bureaucracy, projects coming through the Ideas Marketplace also get an internal champion at NYCHA: Rasmia Kirmani-Frye, director of public-private partnerships at NYCHA. In her capacity, she is also head of the Fund for Public Housing, a NYCHA-affiliated nonprofit created in 2016 to raise philanthropic dollars in support of NYCHA residents.

“One of the benefits of the Ideas Marketplace is that NYCHA is at the table right from the beginning,” Kirmani-Frye says. “If other folks at NYCHA need to be brought in, that’s something that Vlada and I can focus on.”

There is no set list of project types eligible for funding. NYCHA didn’t want to put limits on residents’ creativity. “We want to make sure we’re flexible with the ideas that are coming in,” says Kenniff.

Ioby’s model has its roots in the community-organizing world, encouraging and supporting projects led by people who live near and potentially benefit from the project. So far, 1,325 projects have successfully raised $3.8 million through the nonprofit organization’s platform, with an average donation of $30. Around 87 percent of projects on the platform successfully hit their funding goals, and the average funding goal is around $4,100. Within NYC, about half of projects funded through Ioby to date are in areas earning below the median household income for NYC, or about $50,000.

“Lots and lots of tech companies and businesses use online fundraising to raise money for their companies,” Kirmani-Frye says. “So in a lot of ways this is about equity in crowdfunding.”

At a training day in September, which brought together a range of nonprofits with experience in raising money and working with public housing residents, David Weinberger, city partnerships director at Ioby, talked through the model.

“While we don’t want to lean on residents and make it seem like NYCHA residents are solely responsible for funding their own projects, we think these communities are often overlooked as potential funders for projects, especially those that they lead themselves,” Weinberger says. “We want to test the waters and get projects from higher-capacity groups that are already working with residents in some capacity, demonstrating the model can work. In the future, we hope more ideas come straight from residents themselves, with or without an established community partner.”

In the case of Rockaway Youth Task Force and Ocean Bay (Bayside), there was an additional partner: MDG, the developer that’s currently working on a half-billion-dollar renovation of Ocean Bay as part of NYCHA’s first public housing conversion under the federal government’s Rental Assistance Demonstration Program, a new large-scale public-private partnership model to finance long-delayed repairs and modernization of public housing. MDG marketed the community garden project to its staff and subcontractor network. It wouldn’t have been possible to raise the needed funds without their help, according to Taylor.

“That was one of our concerns initially with crowdfunding. There’s not that much disposable income in our community,” Taylor says.

Work on the garden expansion has already commenced. Once completed, the Rockaway Youth Task Force will also have a part-time paid staffer available to train and assist residents with their raised beds.

“For a lot of residents this will be their first time growing, even for older adults living in NYC all their lives,” Taylor adds.

The ribbon cutting ceremony for the new gardens is scheduled for Oct. 28.