Privatizing the Streets – Next City 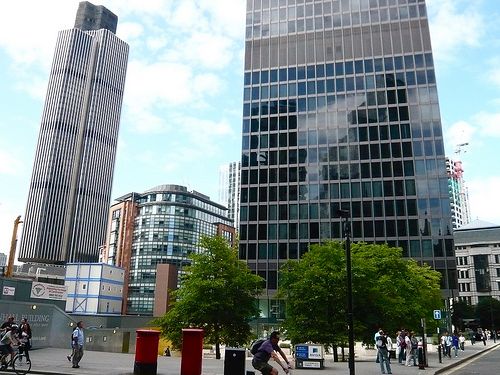 Some grim news from London: apparently there’s a growing trend toward selling developers entire chunks of the city, streets and all, leading to archipelago of private neighborhoods within the city with their own security guards and rules regarding appropriate behavior:

[Privatized streets] raise a challenge to the kind of public life, culture and democracy that has been taken for granted in British cities for the last 150 years. A host of seemingly innocuous activities – skateboarding, rollerblading, even eating in some places – are routinely banned, along with filming and, of course, taking photographs. So is begging, homelessness, selling the Big Issue, handing out political leaflets, and holding political demonstrations. It’s a very different and far less democratic idea of the city and citizenship. In place of the diversity of high streets we are creating sterile, high-security enclaves, policed by private security and CCTV. And rather than making us feel safer, the emphasis on security is a reminder of ever-present danger, fuelling fear of crime.

This is essentially a recipe for removing all vitality from street life in these areas. Luckily, London’s Mayor, Boris Johnson, is opposed to such arrangements and is actually in a place to do something about it as he can “can direct boroughs to refuse permission for new schemes” that lead to the privatization of traditionally public spaces. His own views on public spaces are straight from the livable streets playbook and he has committed £220 million to creating new parks and squares within the city as well as to revitalize central pedestrian areas:

Johnson said he wanted to make public space in the capital as “unrestricted and unambiguous” as possible by minimising traffic lights, removing railings and formal pedestrian crossings – and in some instances pavements too – and relying instead on pedestrians, cyclists and road users “negotiating” street space.

All of which is music to my ears. So it seems we have both the very best and the very worst options on the table for the future shape of London. Let’s hope Johnson gets his way.