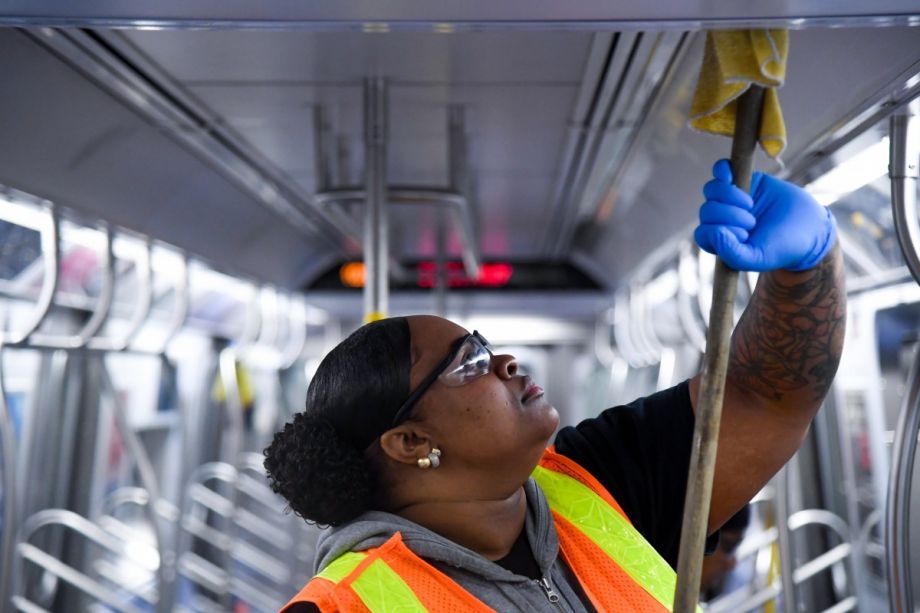 MTA New York City Transit personnel perform disinfectant sanitization aboard an R-160 train in the Coney Island Yard on Tue., March 3, 2020, as a precautionary measure in response to the novel coronavirus (COVID-19). (Photo by Metropolitan Transportation Authority of the State of New York / CC BY 2.0)

A slew of stories in the news media over the last year or so, including most recently a March 13 New York Times story, have puzzled over a general slump in public transit ridership all across the United States. The falloff, occurring against a background of rising city populations and popularity, has proved puzzling to many observers.

Then the novel coronavirus arrived in America, and as a result, transit ridership has fallen off a cliff.

In response to the outbreak, agencies have stepped up cleaning efforts, told riders to board buses via the back door, eliminated fare collection and reduced or altered service in response to staffing shortages, only to add some of it back after trains and buses got overcrowded. Some smaller agencies have even suspended all service.

On top of that, many cities and states have ordered businesses to close, and those that haven’t have asked workers to work from home in order to slow the spread of the virus. The reduced tax revenues associated with those closings has also blown a hole in precariously balanced transit agency operating budgets.

In the wake of this cavalcade of unfortunate events, the leading lobbying group for public transit agencies in North America has tallied up the financial damage and is sending an invoice to the government.

As reported on the Human Transit blog, the American Public Transportation Association has asked Congress to include $12.875 billion in assistance for public transportation as part of a third emergency coronavirus assistance package currently being negotiated. An APTA alert to members and the public breaks down the costs as follows: $1.75 billion for increased direct costs, which the association says 98 percent of agencies have experienced; $6 billion to make up for lost farebox revenue, $4.875 billion in lost sales tax revenue — these last two figures represent 75 percent of the total revenue APTA member agencies get from each source — and $250 million in restart costs.

This figure does not include the $4 billion New York’s Metropolitan Transportation Authority has asked Congress to provide. The nation’s largest urban transit agency, which has seen ridership fall by nearly 50 percent on the buses, 60 percent on the subways and even more on regional rail, parted ways with the national transit industry trade group in 2016.

Last summer, residents of Chicago’s west and northwest sides could avail themselves of a new option for short local trips: e-scooters. The pilot project made 2,500 scooters available in a 50-square-mile area from June through October 2019.

Now, Smart Cities Dive reports, a Chicago Council on Global Affairs study of the pilot recommends the city go whole hog on micromobility. The report concludes that making micromobility devices available across a broad swath of the city could replace a large share of the city’s car use, as 51 percent of all car trips in the city run for three miles or less. That in turn would lead to dramatically lower carbon emissions: the study estimates that the pilot prevented as much as 116 tons of carbon dioxide from being released into the air.

The report identified some challenges the city might face in enabling micromobility to achieve that goal. One is making sure that devices are available in disadvantaged neighborhoods: in the pilot, 72 percent of riders were white and 65 percent were male. Another is making sure they’re stored properly when not in use: 80.8 percent of pilot scooters were parked improperly. And the long-term business prospects for e-scooter companies — 10 participated in the pilot — are uncertain.

Still, report author Samuel Kling told Smart Cities Dive in an email interview, “The wrong question is to ask how to accommodate e-scooters. The question cities need to ask is, ‘How can we approach new technology so that it serves larger goals?’ Starting from that vantage point, it makes sense for Chicago to seriously explore how very small vehicles generally can reduce congestion, lower trips’ environmental costs, improve mobility, and better people’s quality of life.”

One of El Paso’s main travel corridors, part of which is already slated to become a six-lane freeway, will get bus rapid transit service as well now that Federal funding is assured, according to a news item in Metro Magazine.

The item announces a $28.4 million Federal Transit Administration grant to the city for its Montana Rapid Transit Service (RTS) Corridor project. The project will create a 16.4-mile-long BRT line running from downtown El Paso along Montana Avenue past the city’s airport to the Far East Transfer Center.

The grant, made under the FTA’s Capital Investment Grants program, covers 57 percent of the project’s $49.2 million price tag. By comparison, the freeway construction project, whose inner end will overlap with the BRT project’s outer end, will cost more than $370 million when work on it is completed.

Italian cable car manufacturer Leitner Ropeways announced March 13 that the company has begun construction on the second phase of Mexico City’s Cablebus project, which aims to build 34 km (21.1 miles) of aerial tramways throughout the city by 2021. The two Phase 2 routes will total 10.6 km (6.6 miles) and have seven stations in the southwestern district of Iztapalapa. One line will run from there to Constitucion de 1917 station on Metro Line 8, while the other will connect with the metro at Santa Martha station on Line 6. The two lines will have a total of seven stations, with 300 10-passenger gondola cars providing service. The lines are projected to carry 50,000 riders a day on a journey that will last 43 minutes from end to end, as opposed to 75 minutes by car. Total project cost: $163.9 million.

The first two Cablebus lines are being built by an Austrian manufacturer, Dopplemayr, and are set to open by the end of this year.

Do you know of a project that should be featured in this column? Send a Tweet with links to @MarketStEl using the hashtag #newstarts.