Preparing for the Post-COVID-19 Land Grab – Next City

Preparing for the Post-COVID-19 Land Grab 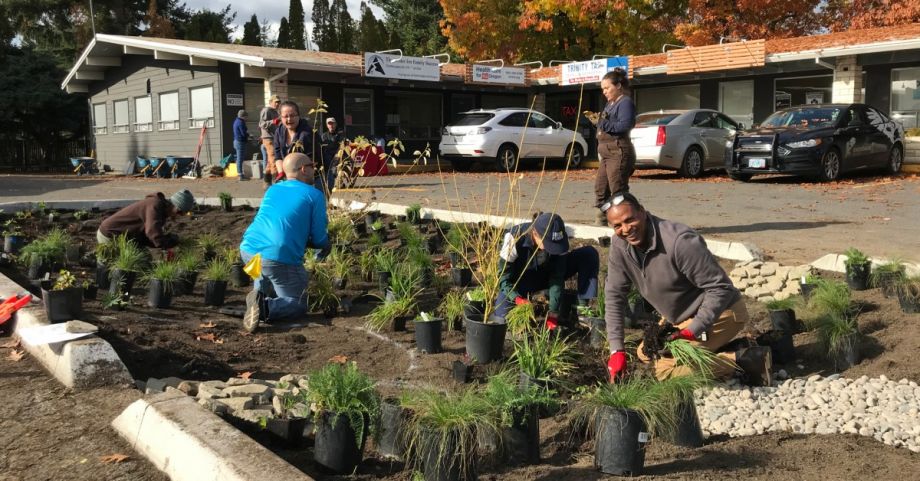 Neighborhood investors and volunteers at work planting greenery at a strip mall that is partially owned by local residents, who are mostly women, people of color, and refugees and immigrants. (Photo courtesy Mercy Corps)

In the wake of the Great Recession of 2008, the tell-tale “We buy homes” signs started going up at seemingly every corner of Atlanta. They promised quick cash during a hard time. What wasn’t clear at first was the true cost of that cash — not just losing one’s home, but entire neighborhoods, to unseen buyers looking to flip homes on a scale never seen before. By 2019, according to a Governing analysis, over 47 percent of Atlanta’s census tracts had gentrified. This story isn’t unique to Atlanta, of course, but Atlanta’s status as the “Black mecca” makes for a more complicated story at the intersection of race and class.

And now, another moment of crisis under the COVID-19 pandemic threatens a repeat of the land grabs that occurred after the Great Recession. As Black communities continue to be disproportionately ravaged by COVID-19, there is dizzying talk in private equity and real estate circles of “dry powder” circulating — $328 billion of it to be precise — primed to swoop in on real estate deals. Market dynamics from before COVID-19, driven by a history of codified racism in urban development and planning, mean that a lot of those deals will more than likely be found in low- to modest-income communities of color.

Across the country, waves of gentrification were already displacing Black and brown communities at staggering rates. “Revitalization” or urban renewal efforts came with the unintended consequences of rising rents, displacement of long-term residents and more targeted eviction of long-term renters of color (including commercial tenants) by developers looking to extract higher returns. Owner-occupied neighborhoods started to transition to renter-occupied neighborhoods and legacy Black businesses were displaced to make way for the next brewery or boutique shop.

That overall loss in equity on both the homeownership and small business front is significant when it comes to Black households that are already at a wealth deficit — the net worth of a typical white family is ten times that of a Black family. Not to mention the other compounding impacts of gentrification, from cultural erasure to over-policing.

Before COVID-19, there was a lot of talk of equitable development within newly minted Opportunity Zones, but most OZ funds that emerged had projected “competitive” investor returns and lack of community benefits that were certain to accelerate gentrification further. After a brief pause that followed nationwide quarantine restrictions, OZ funds have now seen an uptick in activity in the last month. Further, as the stock market retracts and remains volatile, we can expect to see more traditional asset managers look to real estate. Given that, lessons from the last crisis remain prescient.

Addressing the growing racial wealth gap, and fostering racial equity overall, has become part of the stated mission of nearly all major foundations and impact investors. However, real estate is still largely missing from foundations’ funding priorities and only shows up in ways that contradict such lofty goals, in their investments through mutual funds and REITS that, intentionally or unintentionally, fuel much gentrification and displacement. Real estate acts as a double lever in terms of the racial wealth gap — there is the wealth-building opportunity through ownership that many Black households have traditionally been denied, but also the potential compounding wealth erosion that occurs from residential and business displacement.

What can cities learn from the last crisis to help shape a collective, cross-sector response to this one? COVID-19 presents an opportunity for foundations and impact investors — investors that prioritize social or environmental returns, not just financial returns — to fund real estate models that democratize ownership and governance to build community wealth in the following ways:

Foundations could provide capacity-building grants as well as patient mission-related investment (MRIs) to serve as equity injections into community-owned deals. Models such as land trusts, for example, are more likely to provide long-term affordability — although they don’t always provide direct wealth-building opportunities. Limited-equity housing co-ops and emerging models like Neighborhood Real Estate Investment Trusts and Community Investment Trusts offer residents who would otherwise be displaced by revitalization, an opportunity to build wealth through it instead.

The CIT was created using philanthropic capital from Mercy Corps as well as patient equity from an impact investor to create a financial product for community ownership of a retail strip mall for residents in the neighborhood. Residents receive financial and investment training, and invest as little as $10 to $100 per month buying shares and paying back the down payment on the property, which had been provided by Mercy Corps and the impact investors. The resident investors, who are mostly renters, women, people of color, and refugees and immigrants receive dividends annually, and long-term share price appreciation based on the mortgage reduction and change in the property’s value. Their investment is protected from loss through a letter of credit from the bank that provided the mortgage, which also allows investors to exit any time. In 28 months since launch, the CIT has delivered three rounds of dividends averaging 9.3 percent to 140 families to-date, and a share price gain from $10/share to $15.86/share. For low-income investors that don’t get access to traditional investment opportunities, this is significant.

For foundations and impact investors working on closing the racial wealth gap, models like the CIT create not only a wealth-building opportunity for low-income people of color, but also catalyze democratic participation at a meaningful scale by offering access to place-based ownership.

More grant funding and patient capital for community development corporations can also provide terms that facilitate passing on property ownership to residents and communities. Early grant equity in a deal can help reduce the cost later for tenants who are also sufficiently organized to acquire their properties from developers — which ties into the third piece.

Foundations should invest in power-building for housing justice and other community organizing groups through unrestricted grants. Equally important is the need to support grassroots community organizers that have already been doing the work to hold developers and municipal bodies accountable by advocating for affordability and community benefits. It is these community organizers that help push the envelope on racial equity, but they are still severely under-resourced. The deployment of philanthropic capital in ways that helps build power for these groups is especially important here. The same organizers who help tenants push for policies more favorable to communities can also help organize tenants to own properties themselves.

As we collectively come to terms with the fact that the full economic impacts of COVID-19 are still evolving, the call-to-action is to lay the foundation for alternative models of development that walk the racial equity talk. The capital necessary to act as a hedge and mitigating force against private equity’s extractive real estate deals can be found in philanthropy and impact investment and the time to double down on these community-owned models is now, before the next land grab occurs.

Nikishka Iyengar is the founder and CEO of The Guild, a community wealth building organization focused on closing the racial wealth gap in Atlanta through real estate, entrepreneurship programs, and access to capital. John Haines is the Executive Director of Mercy Corps’ CIT. The Guild and Mercy Corps CIT are working together to bring the community investment trust model to Atlanta.