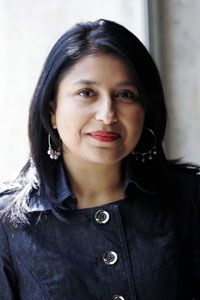 The last decade of officially celebrated growth left behind a vast underclass. The world’s richest 500 people, hardly enough to fill a movie theater, command more wealth than the bottom 416 million. From the varied vantage points of affluence, the poor are many things—victims, citizens, objects, profit opportunities. Ananya Roy’s recent book, Poverty Capital: Microfinance and the Making of Development, brilliantly captures a growing global consensus about poverty, and a brave new world of ideas aiming to fulfill oft repeated declarations of “making poverty history.” Roy, a professor of City and Regional Planning at Berkeley, traversed the world to find out what ideas unite and divide an eclectic anti-poverty movement, including Egypt, where grotesquely uneven development has now sparked an uprising. She found one common denominator: microfinance.

Josh Leon: Your book Poverty Capital identifies a daring new “millennial” anti-poverty movement that is striking in its plurality of voices. Leading innovations on poverty management come from the Global South rather than just Washington. Yet for all the diversity in voices, one uniting thread is the basic support for micro-entrepreneurship. What is it about microfinance that appeals to such a broad spectrum of players, ranging from Hezbollah to the World Bank?

Ananya Roy: Microfinance is one of those rare poverty alleviation ideas whose popularity cuts across the ideological spectrum. Proponents of social justice have hailed microfinance as an instrument to fight the redlining of the poor by exclusionary financial institutions. Economic libertarians have celebrated microfinance as a self-help strategy that serves as an alternative to aid and charity. And although microfinance is not a substantial sector in the budgets of multilateral and bilateral donors, it is quite literally everywhere in the world of development, repeatedly touted as a poverty panacea. Indeed, it is difficult to think of any other poverty intervention that has such urgent burdens to bear, from the empowerment of women to the mitigation of the hardships wrought by economic liberalization. New portals of development, such as Kiva.org, have also made it possible for the globally minded citizens of the global North to feel an immediate and intimate connection to microfinance and to the poor women who are most often microfinance borrowers.

JL: This battle exposes interesting contradictions. Grameen Bank founder Mohammad Yunus says in your book that “there is no point waiting for the state.” Yet he now calls on governments to step in and curb profiteering in microfinance. Is the ethos of privatization an incurable flaw in the DNA of microfinance that leads to exploitive lending, or can some simple regulations rescue the system?

AR: Yes, this is a fundamental contradiction that lies at the heart of microfinance, and indeed many other poverty-alleviation efforts as well. Many proponents of microfinance see it as an alternative to state-led development, and as testament to the entrepreneurial efforts of the poor. I am sympathetic to the attempt to restore dignity to the poor, to see them as something more than victims awaiting aid and charity. But the rest of this framework is naive and obscures the important role of the state in development. As various types of research have shown, the Grameen Bank itself has relied on beneficial partnerships with the Bangladeshi state, including access to cheap capital.

This question, though, raises a much more complex issue. How do we make sense of large, top-down, powerful development bureaucracies like the Grameen Bank and the Bangladesh Rehabilitation Assistance Committee (BRAC)? These civil society organizations are state-like and yet lie outside of the state. Similarly, in Lebanon, Hezbollah is the largest provider of microfinance. At once inside and outside the Lebanese state, Hezbollah combines its military power as a militia with its growing political clout as a political party and its technocratic reach as a development apparatus. Such hybrid entities require our attention for they will most likely dominate 21st-century development.

JL: You provocatively identify the possibility of a “new subprime frontier,” which suggests that while millions are no longer redlined, there is still tremendous inequality in the sense that if you are poor, you risk exorbitant interest rates on shadowy terms. In a way this is eerily reminiscent of the U.S. experience. Access to capital broadened, but a bonanza of predatory lending—punctuated by an inevitable crash—led to boarded-up neighborhoods and, ultimately, more poverty. That bubble made a mockery of the so-called ownership society championed by Bush in the 2000s. Microfinance, however, seems to have weathered the global recession well, and remains a hot investment. What, in your view, is at stake for the poor in the financialization of development?

AR: Microfinance bears many of the characteristics of subprime lending. Meant to democratize capital, it provides financial inclusion but on terms that are strikingly different than those enjoyed by “prime” consumers—be these high interest rates or the patriarchal forms of discipline enacted by microfinance institutions on their borrowers. But it would be a mistake to underestimate the revolutionary capacity of such forms of financial inclusion. Microfinance, in many contexts, operates as the only viable alternative to the elite capture of political and economic institutions, as the thorn in the side of predatory moneylenders, and as an opportunity for the landless poor to build assets.

If we are to draw parallels between the American experience of subprime lending and global microfinance, then two questions emerge. Does microfinance lending have predatory tendencies? Clearly, such accusations have been leveled against many microfinance institutions, from India to Mexico. This is the less interesting question. The second question is more provocative and it is this: will microfinance suffer the sort of catastrophe that plagued high finance during the most recent global financial crisis? Will there be foreclosures and if so what will be foreclosed? After all, microfinance lending does not involve the use of collateral. What are the assets that can then be foreclosed? Or is microfinance an instance of a successful subprime frontier, one where the risk of lending to the poor is being effectively and efficiently managed?

Both these questions are of considerable urgency for the world’s poor. On the one hand, the financialization of development presents the opportunity for financial inclusion. This cannot be denied. But on what terms? With crushing burdens of debt looming on the horizon? On the other hand, the financialization of development eludes the primary causes of poverty. Its premise is that poverty is the lack of access to credit and capital. But poverty is in fact structural exclusion from power. It is the fate of laboring under conditions of great exploitation. It is the history of near-feudal systems of class, race, and gender inequality. Very few genres of microfinance (there are some though) tackle such issues; those that do not systematically depoliticize the question of poverty.

JL: Microfinance has long been applied in rural settings, an obvious place to look for the world’s poor. Now, with marked growth in cities, the geography of poverty has urbanized. Can microfinance play a useful role in urban planning?

AR: Many poverty alleviation interventions have been developed and implemented in rural areas—such as the famous conditional cash transfer programs of Mexico and Brazil and the microfinance programs of Bangladesh. Can such programs be adapted to urban settings? We do not know. In the case of microfinance, the intimacies of village life have clearly facilitated the management of risk, the functioning of lending groups, and the guarantee of repayment. Will such conditions prevail in contexts of urban poverty? Setting aside the question of microfinance, it is clear that the urbanization of the planet demands new social experiments.

In the 21st century, the human condition will be an urban condition. From community development programs to service delivery bureaucracies, this urban condition presents both a challenge and an opportunity. I would argue that at the moment urban planning interventions, especially those that target the poor, lack imagination and creativity. They remain confined to the traditional techniques of slum upgrading and physical infrastructure improvements. Much more is needed and urbanists have to answer this call.

JL: It seems like these are the best of times and the worst of times. Microfinance is riding high, but is also under unprecedented scrutiny. Anti-poverty is at the forefront of global conscientiousness, yet profiting off the world’s poor is also part of the zeitgeist. Millions are leaving poverty each year, despite poverty’s vast persistence, and a huge gap between those at the top and bottom of the economic ladder.

What about this millennial movement in development makes you, as a student of these trends, most hopeful, and what gives you the most concern?

AR: Your poetic question is about microfinance but it also speaks to broader trends—to millennial challenges and hopes. For my book I did research, among other places, in Egypt and Lebanon. Today as a social revolution unfolds in Egypt I am reminded of some of the lessons we can draw from this context. The uprising in Egypt was catalyzed by one in Tunisia. These have been uprisings of a disenchanted youth, educated but unemployed, a generation that sees the glitter of global prosperity but only experiences neoliberal austerity. In Tunisia, a young college graduate unable to find a job took up the selling of fruits and vegetables. But even this was denied him as the police harassed him for not having a permit. He set himself on fire, thereby setting North Africa on fire.

On the streets of Cairo and Alexandria it is indeed the best of times and the worst of times. The least we can do is to listen to these lives of desperate courage, to take seriously their charge of creating a different future. But for this we need more than compassion, more than a conscience about poverty. We have to face up to how the policies of the last few decades have systematically created and deepened inequality. We have to forge a politics that calls this into question. Cairo, a city I love deeply, gives me hope. It embodies the euphoria of a social revolution. But it also signals the heartbreaking limits of social change: limits marked by a police state, by geopolitical strategy, and by an economic world system more tolerant of autocracy than of autonomy.

This interview previously appeared in Foreign Policy in Focus.