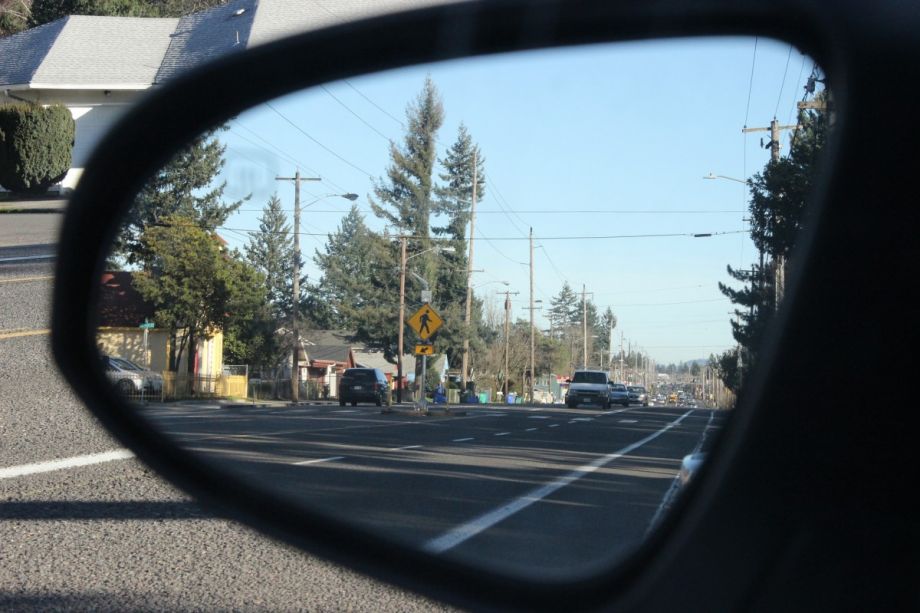 Eighteen months after committing to eliminate traffic deaths in the city, Portland released its Vision Zero Action Plan last week. But after two pedestrians were struck in separate crashes on the same night on Division Street last week, residents who felt the city is still moving too slowly on pedestrian- and bike-safety took the issue into their own hands.

The Oregonian and Bike Portland report that activists with advocacy group Bike Loud PDX organized a “public takeover” of Division Street Saturday, using hay bales to block the road’s outer lanes. By narrowing the large arterial from five lanes to three, the protestors hoped to show that converting the outer lanes for bicycles, buses or emergency vehicles would not significantly impact traffic while making the street safer for all.

Hay bales were placed in the outer lanes in both directions every block or so to calm traffic and channel it into the center lanes. Volunteers stood in front of the bales holding signs and waving to motorists.

Bike Portland reports that the effort worked. “Almost immediately people merged their cars and trucks into one lane of traffic and slowed way down,” wrote Jonathan Maus. “The other lanes opened up for people walking and biking.” The Oregonian, on the other hand, wrote that “traffic quickly became congested between Southeast 84th Avenue and Southeast 90th Avenue as cars merged into the center three lanes.”

Indisputable is the fact that with its current design, the street isn’t safe. About half of all traffic fatalities in Portland happen on the city’s east side, where wide streets encourage speeding cars and discourage walking and biking. This year, five people have died in traffic crashes on Division Street alone, and at least three more serious injury crashes have occurred. The city has designated Southeast Division a high crash corridor. According to the Portland Bureau of Transportation (PBOT), the street sees 50 percent more crashes involving pedestrians than the city average.

The roughly 30 protestors narrowing Division Street Saturday held signs reading “No more death on Division Street,” “Cars are the problem” and “Our streets are killing us.”

“What we hope to do is show that five lanes for driving is not necessary on Division,” BikeLoudPDX co-chair Emily Guise told The Oregonian. “We need to redesign so we can reach zero deaths and zero serious injuries by 2020.”

PBOT currently has no plans to narrow SE Division Street. “We wouldn’t rule it out, but that’s a significant change,” spokesman John Brady told The Oregonian.