Portland Proves Parks Can Be Many Things to Many People 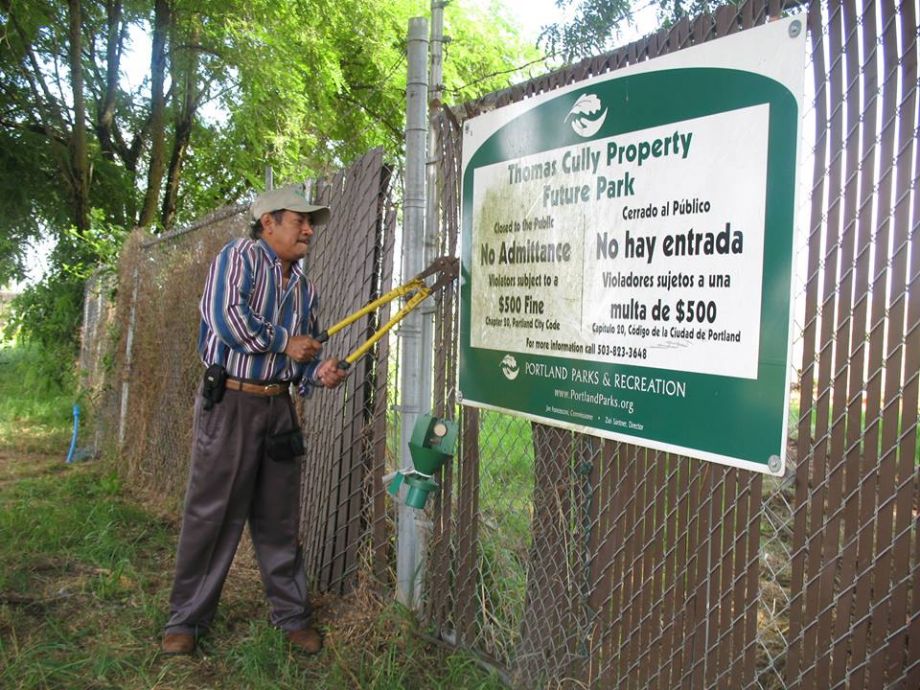 The National Park Service’s Outdoor Recreation Legacy Partnership Program plans to dole out $15 million to cities to develop urban greenspace this year. Last year, the program’s first, just $3 million was split among eight cities. In Mobile, that money is helping to transform a neglected stormwater channel into a greenway. In Detroit, it’s reviving an athletic center on the Frederick Law Olmsted-designed Belle Isle Park.

And in Portland, $500,000 is helping a nonprofit hire local minority and female contractors to turn a former construction landfill into a park for an underserved neighborhood. Cully is “a very park-deprived and habitat-deprived neighborhood,” says Alan Hipólito, executive director of nonprofit Verde. Cully residents live more than half a mile from a developed park or natural area, in one of the state’s most ethnically diverse neighborhoods, with a population that is 41 percent Hispanic.

Verde works to bring environmental infrastructure to low-income neighborhoods, while creating training and employment opportunities for low-income adults, women and people of color. Their landscape contracting business, for example, hires residents of a local community development corporation’s affordable housing units to do landscape maintenance, including for the Hacienda Community Development Corporation itself.

In 2000, the city of Portland acquired the landfill that will become Thomas Cully Park and in 2007 Verde participated in a master planning process for park development, but the city couldn’t foot what they estimated to be a $20 million budget.

So Verde, Hacienda, the Native American Youth and Family Center, and 15 other local organizations formed a coalition and began raising the money, largely through grants, to create it themselves.

That and the lack of funding “lead us to realize if this park is going to get built and if it’s going to meet these deep community goals, we’re going to have to approach it as a developer,” says Hipólito.

Cully Park remains publicly owned, and Portland Parks provides oversight of Verde’s designs, but the nonprofit and its coalition partners are fully authorized to fundraise for, design and construct phase one of the park.

“Verde is both a contractor as well as an advocate,” says Hipólito. The nonprofit also involved families and children from four different area schools in designing the play area.

The first part of the project to break ground has been the redevelopment of 72nd Avenue, which will serve as the park’s entrance. Phase one as a whole includes that play area, a community garden, off-leash dog area, trail network, habitat restoration and an Intertribal Gathering Garden, a 36,000-square-foot space designed by indigenous groups.

It’s the first space of its kind in a Portland park, in a project of many firsts. Hipólito says the project is of a whole new scale and complexity for Verde. The city, for its part, had never given a permit to a nonprofit to redevelop a street before.

“Both sides had to work a lot harder at it than they realized,” says Elizabeth Kennedy-Wong, community engagement manager for Portland Parks and Recreation. “It’s been great, but it’s like a new relationship and we decided that the first time we go out on a date we’re going to do the most complicated dance.”

She says the city had expected to be more hands off, but needed to be quite involved, devoting more staff resources than planned. But she also says Verde has modeled unprecedented public engagement on a project of this kind in Portland, proving to the city what a deep feeling of ownership neighborhoods can have over their parks.

“I do community involvement, and I like to think that I’m good at my job, but I don’t have the capacity to do the depth of engagement that they did,” says Kennedy-Wong. The nonprofit, for example, got the Department of Environmental Quality to teach community members how to do soil sampling and environmental monitoring. “I wouldn’t have had the bandwidth to even think of that.”

Hipólito says this model need not be the exception. “Any investment in a community can do more than one thing. A park can create jobs and support youth, right? A green street can support target businesses and improve health.” As cities invest in these green projects, he says, “If you’re purposeful and inclusive in your policymaking then you can create mechanisms that get some of those dollars all the way into the pockets of low-income people or people of color and the businesses they work for or they own.”

The city will assume maintenance of the completed park, with Verde and other stakeholders remaining involved in programming the Intertribal Gathering Garden, and possibly utilizing one slope that is too steep for ordinary maintenance to teach habitat restoration.

The coalition hopes to complete the project in 2017 for a total of just $9 million, $6.4 million of which has been raised since July 2012, including about $1.5 million from the city and the $500,000 from the National Park Service.

State and local government agencies and federally recognized Indian tribes serving areas with populations larger than 50,000 can apply for this year’s round of Outdoor Recreation Legacy Partnership Program grants by May 20.