As Ridership Slumps, Pittsburgh Works on Bike-Share 2.0 – Next City 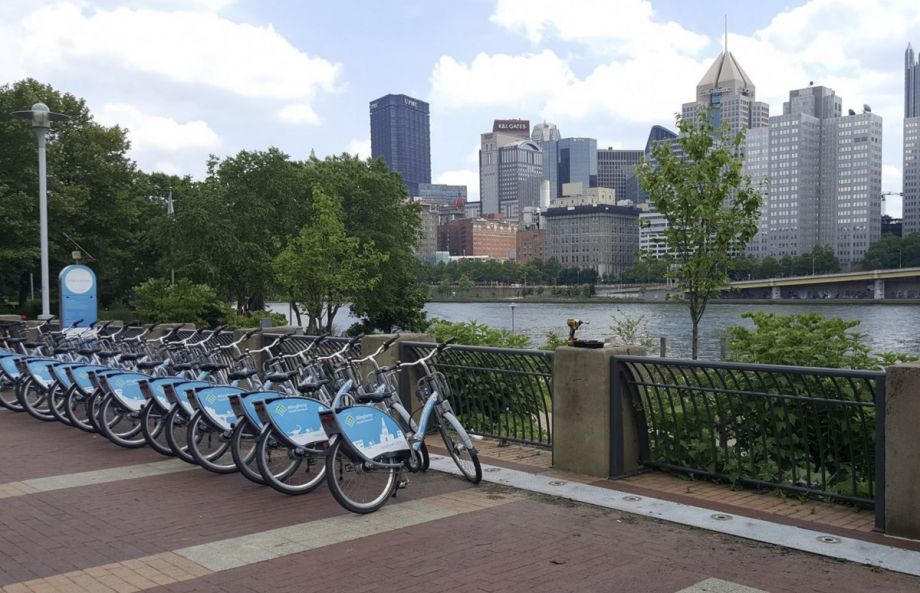 Pittsburgh’s Healthy Ride bike-share system got off to a solid start. When it launched in June 2015, it did so with respectable ridership numbers for a 50-station, 500-bike system. According to data compiled by the Pittsburgh Post-Gazette, it saw just shy of 14,000 rides per month for July and August that year. For comparison, Seattle’s Pronto system, which launched with the same number of bikes (and shut down in March), averaged around 12,000 rides per month for its first year. Boston’s Hubway started with 610 bikes at 60 stations and averaged 35,000 rides per month in year one.

As was expected, Healthy Ride’s usage slipped into the fall and winter; Pittsburgh winters aren’t exactly known for being mild. But come summer 2016, they didn’t bounce back to their previous levels. In June and July they hovered just under 11,000 rides. August and September were just under and over 9,000, respectively. Ridership data is only available for the first quarter of 2017, but in January and February the number of rides matched 2016 levels, and in March there were about half as many rides taken.

And though Healthy Ride Executive Director David White says he’s happy with the performance of his nonprofit, the ridership trends have inspired officials to revamp the system into a hybrid docked-dockless system as well as expand.

“The numbers from [the first summer] are going to capture the greatest amount of interest and activity,” says White. “We are a nonprofit. We are a smaller group. We make decisions that are a little bit different from a city-run system based on the kind of goals we have, to get more people on bikes, get more people active.”

Beyond that, he argues the number of rides isn’t necessarily the best measure of performance. Though people have been taking fewer rides total than last year, White says in the second quarter of this year, the average ride length has increased by 10 minutes, up to a 67-minute average from 57 minutes. “The bikes saw 1,500 more hours of ride time in Q2 2017 than the same period the previous year,” he says.

It’s true that Healthy Ride’s set-up is different in several ways from larger Motivate and B-Cycle systems that many people know. Pittsburgh is one of just three cities in the U.S. to use Nextbike, a German bike-share system supplier. The Nextbikes are checked in and out of station docks, but also have a built-in lock that allows users to lock the bike up outside a store or restaurant without having to worry about checking it back into a station. Unlike Portland, Oregon’s Biketown bikes, which allow riders to check a bike back in anywhere they want, Healthy Ride users still get charged when the bikes are locked up, but not in a station. The system uses a flat $2-per-half-hour pricing structure instead of the common 24-hour or three-day pass options of many systems.

Healthy Ride is in the process of rolling out version 2.0. The first phase of the revamp is eliminating the docks. Healthy Ride users voiced frustration with the docks being finicky. Even in the how-to video from Healthy Ride, removing the bike requires some finesse. The docks will eventually be replaced with simple bike racks that work with the built-in lock. For now users simply have to be near a kiosk to check the bike back in.

Longer term, Healthy Ride plans to mimic Portland’s system where users can either check in and out of a dock or just check the bike out when it’s locked up on the street. Biketown uses a financial incentive scheme to encourage riders to check out a bike that’s out in the wild and return it to a dock. “We have that technology and will be launching a version of that. But the city has so far been interested in using Healthy Ride stations as placemaking tools, so they haven’t really wanted people to return the bikes anywhere.”

Late this year, the system will see an additional 15 stations fill in gaps in the city. Other systems have shown that expansion is key for bolstering ridership. For example, Pronto never expanded in its year and a half of operation and ridership stagnated. Hubway expanded at the end of its first year and again nearly each year after that. It now has 1,600 bikes and averaged about 106,000 rides per month throughout 2016.

Altogether, he’s hoping that improving the ease of use and the extra stations will help bring people into the bike-share fold.

“We just want more people to be on bikes,” he says. “Cities are better when more people are biking.”

Correction: This article has been updated with corrected monthly ridership numbers for Hubway in 2011.