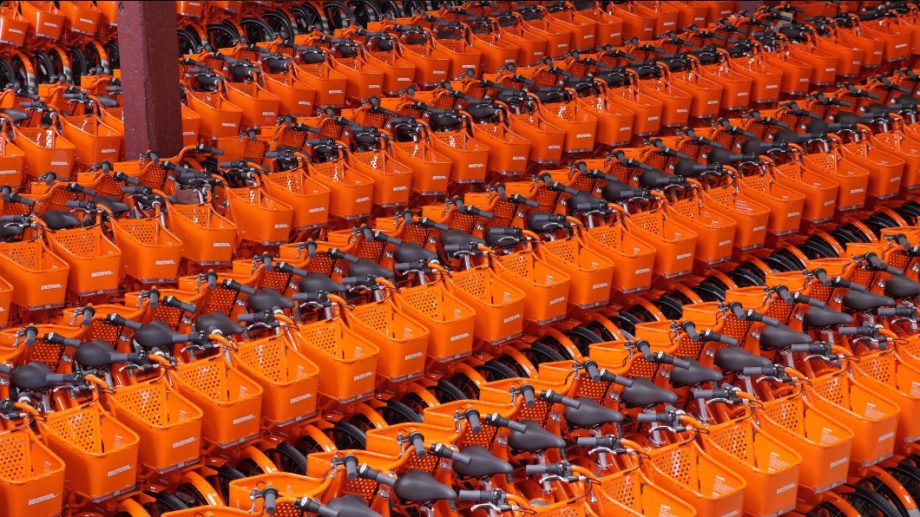 In Portland, where 7.2 percent of commuters bike to work — the highest percentage of any U.S. city — the long-awaited, Nike-sponsored Biketown bike-share system launched Tuesday. One hundred Biketown racks were installed across 8 square miles of the city, with crews stocking 1,000 bikes. After a celebration near the Tilikum Crossing bridge, the system went live.

More than 1,000 users had signed up for annual memberships by Monday afternoon, according to Oregon Live, 400 of them in the first 24 hours that memberships were available. The bikes are bright, Nike orange, and like in most systems around the country, they’re fairly heavy cruisers. (These are made by SoBi.) Everyone who wants to ride — whether as a member or for a single trip — needs to create an account. Bikes are unlocked by punching in a six-digit account number and a four-digit PIN, which releases a U-lock. Twenty of the racks also have a kiosk installed where people can purchase a member card to unlock with instead.

By using keypad controlled U-locks rather than docking stations, the system allows riders to lock up at any public bike rack — not just at Biketown-specific racks — for a small fee. Users who pick up a bike at a public rack and return it to a Biketown station get a $1 reward. Day passes, good for 180 minutes of riding, cost $12; single 30 minute rides cost $2.50; and annual passes $12 per month.

The system isn’t yet live, but there’s already a lot of excitement about it on Twitter, plus some griping about lost parking spaces and traditional bike racks. The city has also announced that while adaptive cycles are not part of the system today, they plan to add them at the urging of City Council candidate Chloe Eudaly, whose son has cerebral palsy. The details have not yet been worked out, but the city has said it will pilot a half dozen tricycles and hand-cranked bicycles later this year. Based on feedback from people with disabilities, the city will likely partner with downtown bike shops to rent out the adaptive cycles, so that people can get assistance transferring from wheelchairs onto bicycles and have a place to store their wheelchairs.

TriMet has created this handy guide for getting the most out of Biketown. From Twitter, here’s a selection of response to the new system so far.

The first #BIKETOWNpdx station is on the ground #Portland! pic.twitter.com/rDEBXGoJwe

“We’d rather be next generation than first generation.” - @repblumenauer on Portland’s 65th place in bike share race.

Our bike share system is cooler than yours! #BIKETOWN is the newest option for visitors to explore Portland #pdxnow pic.twitter.com/cpBiBAJNwW