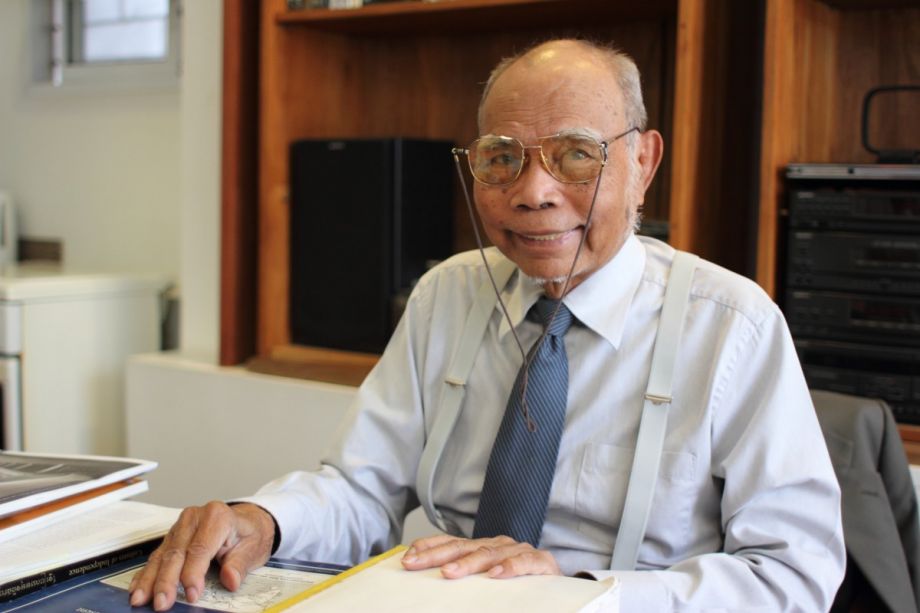 You can still see Vann Molyvann’s signature everywhere. It’s on the Angkor-inspired tower of the Independence Monument, the leafy grounds of the Royal University of Phnom Penh and in the breezy crosshatched walls of the immense National Sports Complex. You can see it too in the White and Grey Buildings – large cubist apartment complexes that were Cambodia’s first public housing projects. Renovated beyond recognition, the Grey Building currently houses offices, and whereas the White Building was once surrounded by manicured gardens, vegetation now sprouts from the cracks of a weather-stained vertical patchwork slum known for its drug dens, brothels and artists.

“It’s difficult to sit and watch the destruction of my children,” 87-year-old Molyvann says as we sit in the impressive Phnom Penh mansion he designed for himself in the 1960s. “Phnom Penh no longer has any development plan.”

Molyvann is Cambodia’s most important modern architect and urban planner. Born in rural Kampot province in 1926, he was sent to Paris to study law at the age of 20. Once there, he quickly shifted his focus to architecture, and soon after returning to Cambodia in 1956 he was made the country’s state architect and head of public works.

This was Cambodia’s Golden Age, an era of prosperity and cultural vibrancy that started with the euphoria of gaining independence from France in 1953 (Cambodia had mostly existed as a vassal state since a Thai conquest in the 15th century) and began to end when the Vietnam War spilled across its borders. Throughout this period, the late King Norodom Sihanouk ruled Cambodia as a (mostly) benevolent dictator intent on developing his poor rural kingdom. To accomplish this, promising young Cambodians like Molyvann were given scholarships to study abroad. Upon their return, many were granted high government positions.

“We were given carte blanche to design scores of buildings,” Molyvann reminisces. His voice is deep and assertive – rather incongruent with his now-frail frame – and he frequently opts to answer questions by reading from the well-worn French, English and Khmer books (his and others’) that he’s piled high on his kitchen table for our interview.

“The flurry of building mirrored the post-colonial mood,” he reads.

Through Sihanouk’s patronage, Molyvann spent nearly fifteen years transforming Phnom Penh from a sleepy colonial backwater into a modern Asian metropolis. Adding to the legacy of French colons – who had built schools, hotels, public offices, tree-shaded boulevards, the city’s grand villas and the royal palace – Molyvann oversaw the construction of a new airport, sewers, dykes, parks, offices, universities, factories, hospitals, mansions, theaters and public housing. His designs embodied what became known as the New Khmer Architecture, a style that adapted modernist aesthetics and materials to Cambodia’s tropical climate while employing both vernacular and Angkorian motifs. In terms of urban planning, Molyvann says he was inspired by the concepts of the Garden City and La Ville Radieuse, and the intricate water management systems commissioned by medieval Cambodian kings. Phnom Penh’s area increased twofold under Molyvann’s stewardship, and between 1962 and 1970 its population grew from 400,000 to more than one million.

Cambodia’s Golden Age would come to an abrupt end with a pro-U.S. coup d’état in 1970. Molyvann fled to Europe in 1971. Upon returning to Cambodia in 1991, the architect was aghast to see how two decades of conflict, neglect and greed had gutted a city that was once known as “the Pearl of Asia.”

For a brief period, Molyvann headed the APSARA Authority, an organization that is supposed to manage and protect Cambodia’s famed Angkor Archaeological Park. He was sacked in 2001 at Prime Minister Hun Sen’s request after speaking out against damaging tourism developments at the site. Since then, Molyvann has devoted himself to writing and academia (he received his PhD in 2008), and has become one of the most prominent critics of the current Cambodian government’s urban development agenda.

“Mid-century buildings survived the Khmer Rouge only to be endangered now by the short-sighted development of Hun Sen,” Molyvann reads. He pushes aside the book. “Everything now is completely freehand.”

Throughout the city, historically significant buildings are being torn down in order to make way for new shops, offices and houses. Even the National Sports Complex, which Molyvann considers to be his greatest accomplishment, was leased to a Taiwanese firm in 2000. Most of its sprawling grounds are now being readied for a large commercial and residential development, and in the process, the main stadium’s Angkor-inspired drainage system has been filled with cement, causing the area around it to become swamped in the rainy season.

In a way, what’s happened to the stadium epitomizes the Cambodian government’s failure to deal with the city’s greatest environmental challenge: water. For half the year Phnom Penh is inundated with monsoon rains that flood its surrounding farmland, while during the other half of the year, the region is dusty and dry.

“The history of Phnom Penh,” Molyvann says, “is working with and fighting against water.”

The city, he says, has now expanded well beyond a concentric ring of dykes that was commissioned more than four decades ago. Compounding this, Phnom Penh’s few remaining lakes, which act as natural storm-water reservoirs, are in the process of being filled as a matter of real estate speculation. Throw inept drains into the mix, and Phnom Penh has become incredibly vulnerable to flooding. A major tropical storm, Molyvann says, could absolutely devastate the city.

“We would fill lakes too, but we would do it precisely,” Molyvann says. Those that remained, he claims, were purposefully left to collect floodwater. “Prime Minister Hun Sen rejects all of the plans that have been designed.” When I ask him why, his answer is simple: “To sell the land.”

According to Molyvann, the city is growing uncontrollably, having doubled in population to more than two million since the mid 1990s. Moreover, with absolutely no zoning rules in effect, factories can now be found abutting residential areas. A lack of public transportation means that the pothole-riddled streets of this rapidly sprawling low-rise city are increasingly congested with traffic.

In 2003, Molyvann published Modern Khmer Cities, a book he describes as his “political manifesto.” In it, he traces the histories of Cambodia’s three most important municipalities – Siem Reap, Sihanoukville and Phnom Penh – and offers prescriptions for their future development. Molyvann’s recommendations for Phnom Penh are varied. First and foremost, he says, the city must put an end to all ad hoc development by creating and implementing a master plan. If Molyvann were to have his way, Phnom Penh’s lakes and canals would no longer be filled, new dykes would be built around the city, mass transportation would be created, students would again be sent abroad and then given government jobs, and stringent zoning regulations would be put into effect to create self-sustained neighborhoods. Molyvann would also like to see the city expand southward along the built-up banks of the Bassac River, instead of east into flood-prone plains. If such actions are not taken immediately, Molyvann says, Phnom Penh’s future will be characterized by chaos, congestion, flooding and poverty.

“There will be slums everywhere, like la favela in Rio de Janeiro,” Molyvann says. “The Khmer people are very resilient. We have been attacked and swallowed by other countries, but our culture was never completely destroyed.” But as long as Cambodia’s ruling party (which has controlled the country since 1979) remains in power, Molyvann believes that nothing in Phnom Penh will change for the better. “I have no hope that we can survive this time.”