Philly Has Loose Demolition Regs, But So Do Most Cities – Next City

Philly Has Loose Demolition Regs, But So Do Most Cities 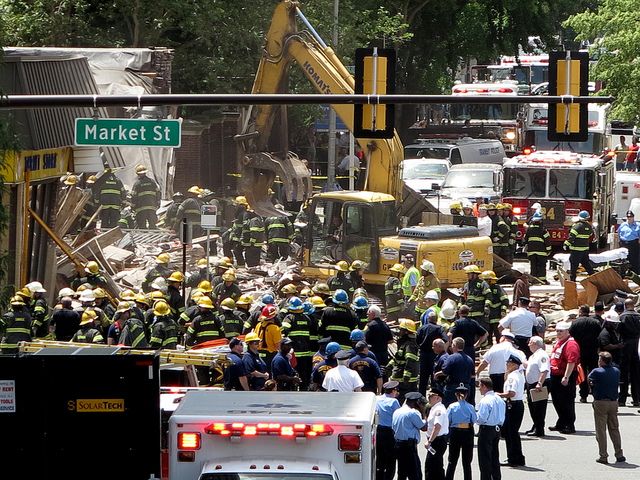 Scene of a deadly June 5 building collapse in Philadelphia, caused by botched demolition. Credit: PlanPhilly/Eyes on the Street

In Philadelphia, a city with a rich history of municipal incompetence, there’s a natural impulse to assume the worst about city government when tragedy strikes, as it did in the demolition-gone-terribly-wrong that killed six people on the morning of June 5.

There are at least four active investigations looking into the tragedy, and if the city really did screw up, as many have argued, then the truth will come out.

Now, of course, it is head-smackingly obvious that something as inherently dangerous as demolition should be subject to more oversight, more inspection and more vetting of contractors. All are measures Mayor Michael Nutter has moved quickly to enact, though some will require City Council approval.

But what about before the collapse? How did Philadelphia’s demolition regulations stack up against those of other cities?

Right in the middle of the pack. Philly’s pre-collapse demolition policies were less stringent than some — most notably New York’s — but were hardly an outlier.

A Next City sampling of the demolition policies of 12 big cities finds that Philadelphia’s oversight of private wrecking jobs, minimal though it was, is entirely typical. Which means the disaster on Market Street could just as easily strike most any big city in the country at any time.

In most cities, the requirements for a demolition permit are pretty basic. Insurance. A licensed contractor (though not always even that). And a checklist of environmental and public health clearances: Asbestos, water and, in more progressive cities, a recycling plan for the demolished building materials.

Pre-demolition engineering reports — the kind Nutter now wants all applicants to provide — are not required in many of the cities surveyed, with some significant exceptions, namely Chicago, Denver and New York.

Likewise, it is common for cities to inspect demolition sites only before the work has begun and once it is completed. Philadelphia’s Department of Licenses and Inspections has been lambasted for not checking on the building mid-demolition, but doing so would have been atypical in most cities. (Responding appropriately to complaints about unsafe demolitions is a different matter, one that surely will interest investigators).

Another Philadelphia failing, as identified by PlanPhilly, is the lack of explicit demolition guidelines for contractors. There are no lines in the city’s building code telling demolition crews when to brace a wall, for instance. But again, this does not appear to be unusual. In cities across the country — Seattle, Phoenix, Austin, Boston, San Diego and Pittsburgh, to name a few — there’s little in the way of firm guidelines for private demolition crews to follow.

This exhortation from Portland’s City Code is representative of the vague language most cities use: “All structures to be demolished shall be taken down in a safe manner. The streets or sidewalks shall not be littered with rubbish and shall be wet down, if necessary.”

Cities tend to get specific on demolitions only before and after they occur, not during. Before the wrecking balls fly, most codes require neighbors to be notified, utilities to be shut off and capped, and sometimes a site plan (which is little more than a description of the physical structure and lot). Once the building is razed, cities are rightly concerned about debris, improperly filled holes and soil grading, so codes sometimes make mention of those.

But it is not the norm to find a codebook or policy sheet detailing how a building ought to be safely taken down.

The big exception to that rule is New York, which has 90 pages of “Safeguards During Construction or Demolition” (via PlanPhilly), requirements that make a lot of sense in a city of such density and scale.

But the prevailing view in most city halls has been that the property owner, and his or her contractor, gets to determine how to safely dismantle a structure, not the municipality.

This is a point city officials made repeatedly during a special investigatory City Council hearing yesterday.

“The public does not have any liability nor responsibility” for a private demolition job once a permit has been issued, said Everett Gillison, Nutter’s chief of staff.

But this proposition will be tested in the weeks and months to come, and indeed the Nutter administration itself seems quite willing to accept more municipal responsibility for oversight of private demolition sites.

The good news, if any, is that this is a problem small enough to be fixed, even with the limited resources available to L&I (where staffing has declined by 33 percent since 2002, according to the Philadelphia Inquirer).

A Next City review of L&I building permit data shows that, in the last six years, the number of demolition-related permits issued by the city has not topped 800 in a single year, and averages about 675 a year. (Caveat: these are estimates. L&I often bundles demolition permission in other permits. An effort was made to include those cases, but no precise department-generated figures were available.) The estimate includes partial exterior demolitions as well — tearing down one wall to expand a building, for instance. The number of full-blown demolitions on scale with the Market Street collapse is likely to be far smaller.

Getting inspectors to that relatively small selection of sites more frequently would seem to be well within L&I’s capacity, considering the department issues more than 38,000 building permits annually.

Philadelphia has learned its lesson on the perils of demolition in the hardest conceivable way. Other cities with similarly insufficient wrecking rulebooks should be paying close attention.