Philadelphia Says Goodbye to Yet Another Historic Building – Next City

Philadelphia Says Goodbye to Yet Another Historic Building 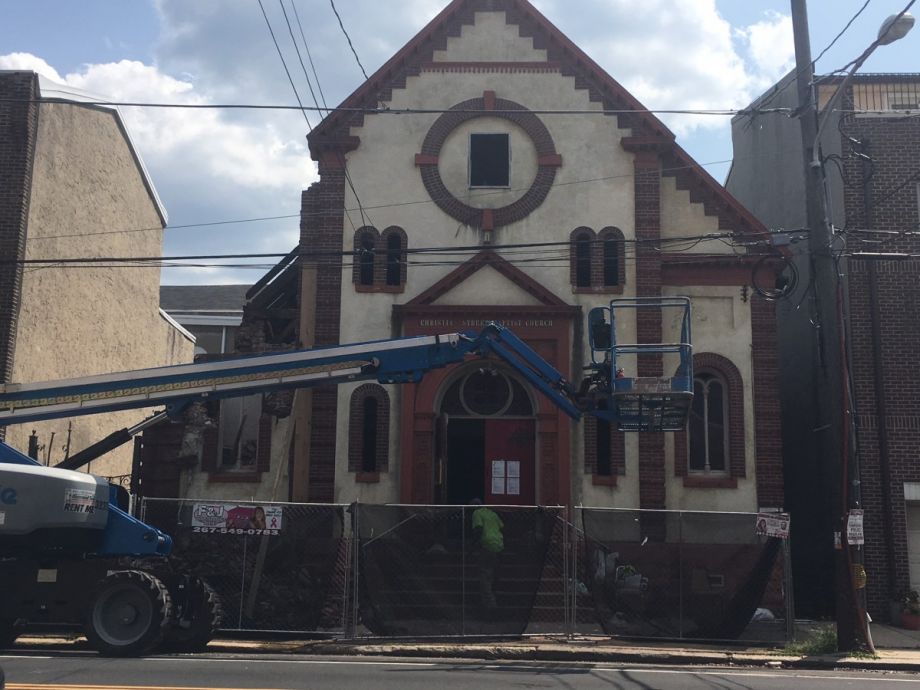 It’s a sight that Philadelphians are growing used to seeing — demolition crews peeling the bricks and mortar off of a beloved but taken-for-granted old building in the heart of a changing neighborhood, with the promise of nothing but more of the same expensive housing to take its place.

The former Christian Street Baptist Church, a small church built for a growing community of Italian immigrants in the 1890s and later owned for most of the 20th century by an African-American Baptist congregation. The church had been a flashpoint in the city’s simmering crisis of demolition during a time when officials and advocates are trying to rethink how historic preservation works in the city and make it both stronger and more inclusive, as Next City has covered. But preservationists’ attempts to save the church, which was not listed on the local register of historic places, ultimately failed. The building’s demolition began last week.

“It’s the loss of a neighborhood landmark that’s been there longer than anyone can remember, since the 1890s, and that in another climate would have been a great candidate for adaptive reuse,” says Paul Steinke, executive director of the Preservation Alliance for Greater Philadelphia, who spent months trying to find a buyer for the church who would save it from demolition. “Losing that really kind of cuts at the heart of the character of that community. So it’s painful to see it go. And in a city that lacks any real incentives for preservation, it’s hard to compete in the housing boom.”

Preservationists first tried to intervene last fall, after the congregation had found a buyer willing to pay $1.5 million for the church, with the expectation that it would be demolished and replaced with housing. The Philadelphia Historical Commission was split over whether to designate the building historic, which would have prevented demolition. The shrinking congregation argued that they couldn’t afford to maintain the building, and listing it on the register would deprive them of the value of the sale. Ultimately not enough commissioners voted in favor of designation.

The saga dragged on for months. The buyer, Ori Feibush, said that he would sign the contract over to anyone who would save the church and pay his cost of $1.5 million, and later said he would sell it for $1 million. But Feibush says that one potential buyer who came in with a last-minute offer couldn’t show proof of funds.

Was the decision to move forward with demolition difficult?

The problem is that preservation isn’t competitive with demolition and redevelopment in the city, Feibush says. He says he thought he was “doing a good thing” by allowing time for a buyer to come forward. But ultimately he believes preservationists were just trying to buy time until his demolition permits expired. If his company hadn’t bought the property with the intention of demolishing it, he says, half a dozen others would have swept in with a similar plan. It’s convenient to blame the developer, but “the system is broken,” he says: If the city wants to prevent more demolitions like this, it has to create policies that narrow the gulf between what properties are worth with old churches on them and what they’re worth as vacant land.

Steinke faults Feibush for not accepting an offer when he had said he would. But he agrees that the problems are systemic.

“We need to expand protections, both through historic districts and individual designations,” Steinke says. “And we need to institute more incentives for preservation, including not allowing the tax abatement to be used on buildings that are on the local or national register. You should not be rewarded by the taxpayers for tearing down historic buildings.”

Some are publicly doubting that the preservation task force appointed by Philadelphia Mayor Jim Kenney will come up with any significant solutions for preservation issues in the city. Steinke says there’s still reason to hope that the group’s recommendations will be meaningful. But the task force process is slow-moving, and the building boom is frantic. And Steinke says that until new policy recommendations are released and enacted, more buildings like Christian Street Baptist Church are threatened.

“Churches are right in the bullseye of desirable sites,” he says. “They usually occupy bigger lots. They often have weak-to-nonexistent congregations. The buildings themselves often suffer from various degrees of neglect. So it’s like moths to a flame: Developers are attracted to them.”