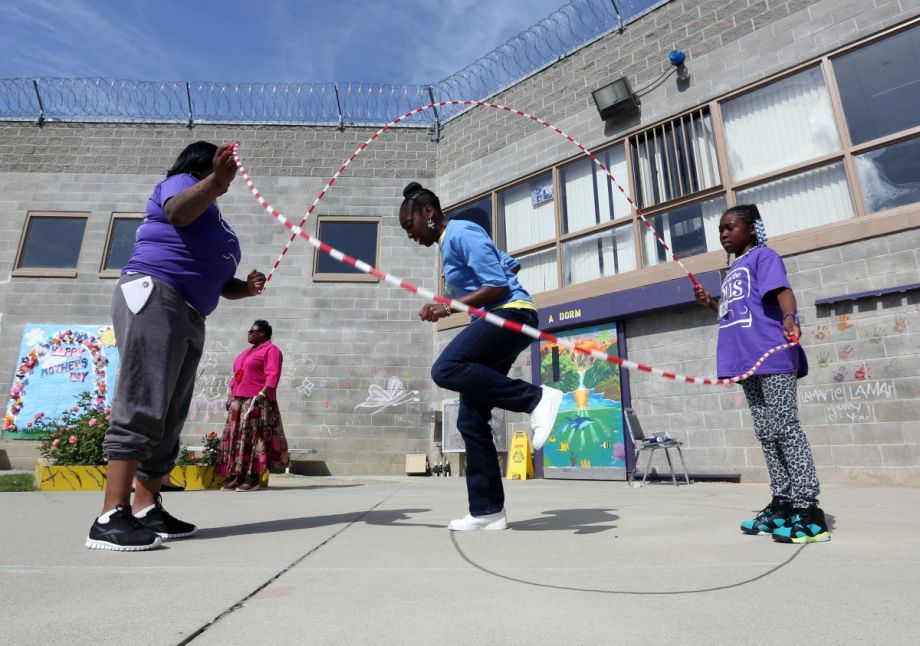 A Calif. inmate plays with her daughter during a prison visit. A new videoconferencing program in Philadelphia aims to keep incarcerated moms involved in their kids’ lives. (AP Photo/Rich Pedroncelli)

An arrest can start with a knock on the door, or perhaps a roadside apprehension. Sometimes it happens right in the courtroom. However a person enters the U.S. prison system, there is one consistent outcome: an unplanned separation from the people closest to them. For imprisoned parents, staying connected with their kids typically requires navigating a frustrating, unresponsive network of prison officials, county officers and social workers who are ostensibly there to help but often lack the tools to do so.

On June 9, officials from the Philadelphia Prison System and the Department of Human Services will meet to review a pilot program designed to cut through some of the red tape. Now in its tenth month at Riverside Correctional Facility, which houses roughly 800 women, the program uses videoconferencing to give incarcerated parents with children under county supervision a more active role in the decision-making surrounding their kids. While the program encountered some early snags related to volume, Jessica Shapiro, DHS chief of staff in Philadelphia, says the agency is currently working to involve more families. The high-tech approach could be rolled out across the county this summer.

Kathleen Creamer, a Community Legal Services attorney who helped create the program, says about 10 percent of kids with a mom in jail are placed under the supervision of social services. Under federal law, absent a limited number of discretionary exemptions, social workers are required to begin legal separation proceedings for kids who have been in the system for 15 consecutive months — which means that without a proactive plan for unification, the prospect of a woman losing her children as a consequence of her crime is a very real one. (Since 1991, the number of minor children whose mother is incarcerated has doubled, rising at nearly twice the rate of kids with fathers in prison. For an in-depth look at America’s women-in-prison crisis, read Next City’s Forefront article, “You Don’t Look Like a Murderer.”)

Although parents have a legal right to be included in DHS status meetings at least once every six months, Creamer says in practice it doesn’t always work out that way.

“These are very important meetings since they basically are designed to set up an action plan for unification, yet historically parents who were incarcerated weren’t part of the program,” says Creamer. “In my experience DHS hasn’t been doing the best job of getting everyone at the table.”

The county is also looking to expand the use of digital video technology to enhance visitation services. As NewsWorks reported, the Philadelphia prison system is rolling out another pilot program this summer (at Curran-Fromhold Correctional Facility) that would enable family members to remotely visit with their incarcerated family and friends using a PC or, eventually, a mobile device.

Prisons Commissioner Louis Giorla said video visits could cut down on wait times and help families that live far away stay connected with loved ones.

But while technology is creating new avenues for jailed parents to stay connected with their children (an estimated 2.7 million children have a parent in jail or prison), prisoner advocates, including Creamer, emphasize the importance of contact meetings and say videoconferencing should only be used as a supplemental measure.

Shapiro says that so far the Riverside pilot program has received high marks from both families and DHS staff and points to an example of a recent “family team conference” held via videoconference.

“A mother and grandmother who were both incarcerated, [and] the children and grandchildren were able to attend the conference at DHS,” she explained. “The conference was so emotionally powerful for all parties that the facilitator had to actually stop the conference several times.”