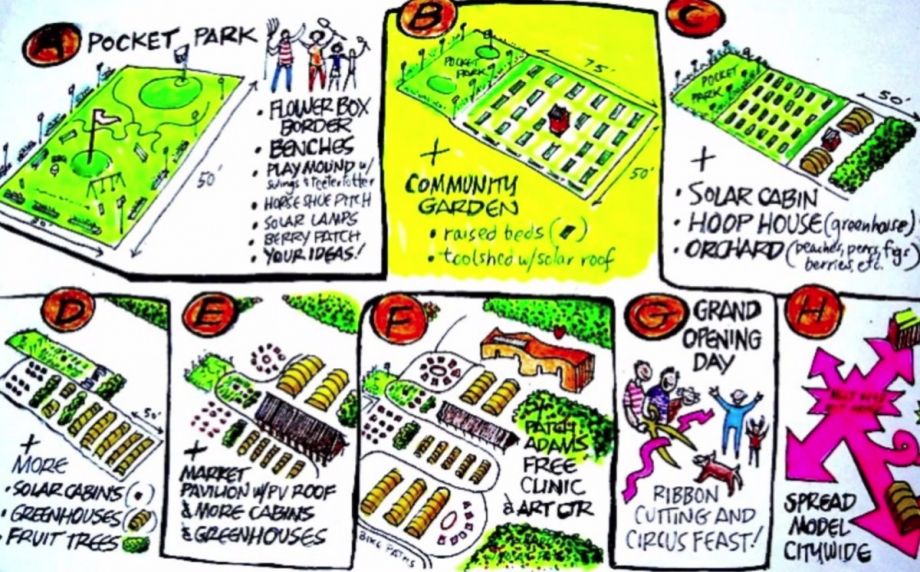 Could the unstable coal ash that lies beneath the surface of North Philadelphia’s Logan Triangle become fertile soil for a new approach to brownfield reclamation? Paul Glover is betting that it can.

The longtime community organizer and activist has come up with a proposal for redeveloping the Triangle, vacant since the late 1980s, that taps into a variety of urban trends of note: cooperative economics, low-impact development, community gardens and low-cost, lightweight “tiny houses” that could be built without driving piles for deep foundations.

The project Glover has assembled in collaboration with local residents is called LOAM, which stands for Logan Orchard and Market. The project seeks to provide amenities community residents have told planners they want — open space for recreation, affordable housing — along with amenities and activities designed to benefit residents and neighbors, including a “Patch Adams Free Clinic,” orchards and markets where food grown on the tract would be sold to the community. (The desire to find a location for the free clinic, which Glover has sought to build since 2011, drove the evolution of this project.)

The LOAM plan calls for 100 greenhouses and 300 “solar cabins” on the 35-acre plot in upper North Philadelphia. The roughly triangular site had once been a valley through which the Wingohocking Creek had flowed, but as Philadelphia grew explosively in the early 20th century, the city put the creek in a sewer, filled in its stream bed, and turned the valley into a flat plot of land upon which houses could be built. Several streams in North and West Philadelphia were filled in in this fashion, but where most of the others were filled using soil and rock, coal ash and cinders formed the bulk of the fill for the Logan Triangle. From the 1950s on, the land began to sink, causing foundations to crack, homes to list and gas mains to explode periodically. After a 1986 gas main explosion revealed the extent and severity of the damage, the city moved to condemn the entire area, relocate the residents and raze the houses. Since the late 1990s, the site has been an empty ghost town, with only the streets that run through it and a few buildings at its corners remaining in place.

Starting in the late 2000s, the city sought to redevelop the land. A study conducted for the Philadelphia Redevelopment Authority concluded that part of the site could support dense development. Proposals by two large local developers in 2007 fell through when the housing bubble burst.

In 2009, the Urban Land Institute conducted its own study of the site that recommended the entire plot be reserved for green uses. It was in the spirit of that recommendation that Glover expanded his free clinic proposal into a neighborhood transformation project.

He found a receptive audience among community residents upset at official neglect of the site. One of them was Charlene Samuels, board member of the Let’s Love Logan Community Association and the Logan-Olney Equal Partners in Change Stakeholder Group.

“I heard about the LOAM project from Mr. Glover in March and April,” when Glover held meetings in Logan to introduce the project to community residents, Samuels said. “My initial reaction was, ‘Thank God somebody has come up with some type of plan.’ The residents who have lived in this community for 25-plus years need to see something substantial done on the Logan Triangle.”

Samuels found much to like in the proposal. “What I like most about the plan is the growing of fresh fruits and vegetables, having a farmers’ market, the playground for the youth and the free clinic,” she said.

The gardens and market would form the foundation of a local cooperative economy with a tradable currency modeled after the Ithaca HOURS scrip Glover set up in Cornell University’s hometown in 1991. “We don’t replace dollars, we replace lack of dollars,” he said. The Logan HOURS currency would monetize the skills and talents of Logan residents, and the residents can in turn use the currency to purchase food from the orchards and greenhouses and pay rent on the solar cabins.

The solar cabins are perhaps the most distinctive aspect of the proposal. These homes are inspired by the burgeoning “tiny house” movement, which seeks to reduce the impact of housing through the use of flexible space to pack all the functions of, say, a 1,500-square-foot house into a structure one-fifth that size. The advantage of such buildings for the Logan site is that they can be re-leveled should the ground continue to settle, as they require no foundations. Glover’s proposal envisions charging very modest rents for these homes: $100 a month or 10 percent of one’s income, whichever is greater. “These houses are increasingly popular nationwide, especially among young professionals and retirees,” Glover said. The cabins would then contribute to ensuring a diverse mix of residents in the neighborhood.

Samuels isn’t so sure that the cabins would work for current residents, though. She said the houses were the part of the proposal that impressed her the least. Tiny house advocates, however, can point to examples of families with children living successfully in houses as small as 200 square feet.

Both Glover and Samuels see the project’s low cost and modular nature as a point in its favor. Glover estimates that the entire 35-acre LOAM development could be built for $3.5 million, some of which would come in the form of “sweat equity” built up by residents holding construction jobs on the project. At a July meeting to discuss advancing the project, many of those in attendance urged that garden plots be developed right away as proof of concept and an organizing tool.

The project, however, needs to clear one high hurdle to its realization: The entire Logan Triangle has been owned by the Redevelopment Authority outright since 2012, and the PRA is currently pursuing its own redevelopment plan, also developed after a series of neighborhood meetings. That proposal follows a more conventional model, with rowhouses, apartments, commercial strips and senior housing along with a large tract of open space over where the creek once flowed and the land is most unstable.

Both Glover and a representative of the architectural firm the city is using to work with residents on its plan say there’s room for both visions on the site. Glover, however, makes it clear that he wants the community to be the chief beneficiary of whatever develops there. “LOAM uses all the land to meet neighborhood needs while serving as a regional resource,” he said. “By contrast, PRA relies on one large developer, whose track record is unknown, to build ‘affordable’ housing profitable to the developer and to PRA.

“We’d not be pleased to see LOAM used to make the developer’s front yard nicer and thus their property more valuable,” he continued. “We want this public land to benefit the public. We will watch the dollars move to see who is profiting from the sale of this land, which was purchased by taxpayers.”