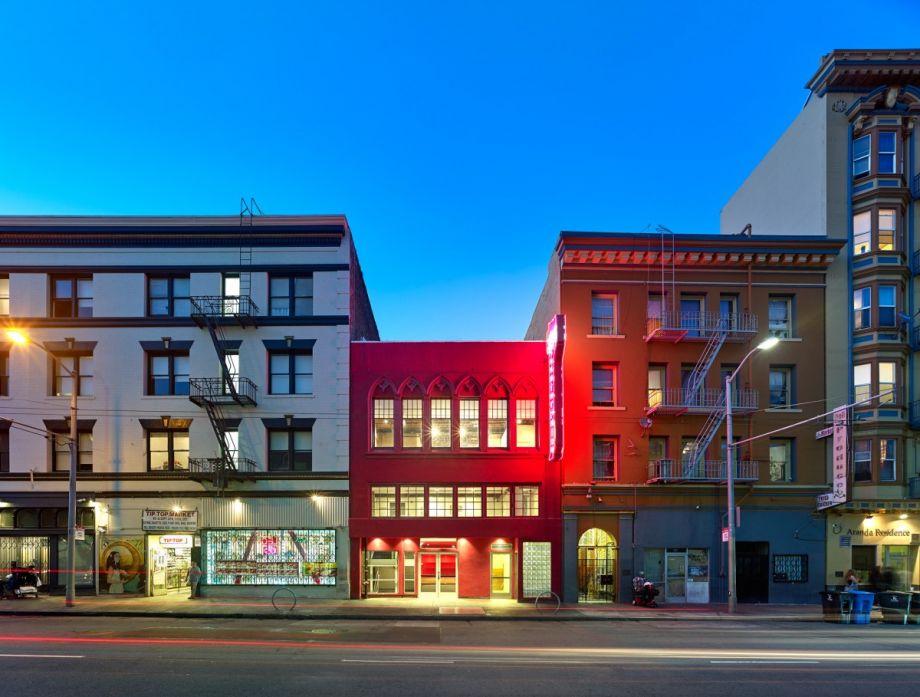 A San Francisco Department of City Planning survey in 1976 hinted at a possible future for the building built in 1922 and still standing today at 80 Turk Street. Scrawled in barely legible handwriting, the field notes of the survey describe the building as, “The remnants of a venetian gothic which could be capitalized upon easily.”

The building was in use as a theater for adult entertainment at the time, and would be for many years thereafter — part of the Tenderloin’s history as the pornography capital of the United States. Neighborhoods like these offered work opportunities, nightlife and freedom of expression for many who were shunned elsewhere. Earlier this year, San Francisco celebrated the creation of the world’s first Transgender Cultural District, which includes 80 Turk Street.

But San Francisco’s real estate market feels like a constant threat to the arts and cultural spaces that give this neighborhood and others around the city their own unique histories and flavors. While the Tenderloin has somewhat managed to resist or escape the waves of development in San Francisco’s downtown areas to its east and south, development is certainly moving in. A WeWork opened in the southern part of the neighborhood in 2013.

But that same year, 80 Turk Street became the first acquisition for the Community Arts Stabilization Trust, a new entity created specifically to acquire properties and preserve them as permanently affordable spaces for artists and cultural organizations in the Bay Area. The trust acquired 80 Turk Street and set up a lease-to-own agreement with CounterPulse Dance Theater, whose deep ties to the community include the Tenderloin Arts Lending Library, a queer-artist-run project that lends artwork to Tenderloin community members free of charge.

Just one month later, only a few blocks away, the trust acquired a second building in partnership with The Luggage Store Gallery, a thirty-year-old artist-run gallery and cultural space. The properties will be deed-restricted for arts and culture use in perpetuity.

The Community Arts Stabilization Trust now has four properties in its portfolio, and continues to raise capital for future projects in its pipeline, including its first affordable artist housing projects. With a potential downturn in the commercial real estate market looming because of COVID-19, CAST executive director Moy Eng is eager to pounce on the opportunity to pick up some properties at a discount — at least compared to recent prices in the Bay Area.

“We believe there may be a singular moment in time over the next several months to raise capital to work with artists and to help retain and strengthen our artists and cultural sector through the acquisition of property to keep them here,” Eng says.

Facing similar pressures on their arts and culture scenes, more than a dozen other cities so far, from Seattle to Denver to Austin to London, have since reached out to the Community Arts Stabilization Trust for advice in launching entities with a similar purpose.

“Ultimately, we are retaining and fostering the life of a community or cultural asset,” says Eng. “I don’t just mean the space, the space is in service of the content and the programs that are really the asset for the community.”

The Community Arts Stabilization Trust emerged out of the shared experiences of CounterPulse and The Luggage Store Gallery. The two groups had been working with Northern California Community Loan Fund (since renamed Community Vision), which also provides real estate consulting services to nonprofits, to try to secure permanent homes.

CounterPulse has been through several locations since its founding in 1991. The Luggage Store Gallery had previously attempted to acquire the building it had been renting on Market Street since 1991, but its earlier efforts fell through after it became clear the cost of bringing the building up to code was prohibitive. Then, the Kenneth Rainin Foundation, which already had close ties to both groups, put up $5 million to seed the Community Arts Stabilization Trust.

With the $5 million, the trust acquired the two properties right away, then spent two years cobbling together the grants, tax credits and low-interest debt to build out 80 Turk Street and bring the Luggage Store Gallery up to code. In 2022, each organization will have the opportunity to acquire the buildings from the trust at the same relatively affordable price the trust originally paid for them.

The seven-year timeline actually comes from the Federal New Markets Tax Credit program, a crucial source of financing for each deal, which requires the ownership structure for the property to remain at least seven years after a transaction takes place.

“But we’re effectively freezing the price and timeframe to do their work, build their community even more and build more programming, and give them seven years to raise the funds to buy their home from us, free and clear,” Eng says. Once they sell those properties and make back their initial investment, they can recycle the money back into more acquisitions — the Kenneth Rainin Foundation doesn’t want its seed money back.

There isn’t one model for creating long-term affordability for arts and culture organizations. In another case, the city extended the Community Arts Stabilization Trust a 55-year ground lease for a former streetcar mechanic shop in a neighborhood called The Excelsior. The trust is planning to sublet the space to an established arts organization in the neighborhood.

For the fourth property in its portfolio, a multi-billion dollar real estate company donated a building to the trust as part of a community benefit agreement, and the trust will lease that space out at rates that are affordable to established arts and culture organizations.

“Plenty of organizations can’t afford to own their own or have made the decision not to own property but really benefit and want a long-term, stable, below market-rate lease that is affordable for them,” Eng says.

In some ways, the Community Arts Stabilization Trust operates like a conventional real estate operation. It has to keep its ears close to the ground, identifying potential deals ideally before they come onto the open market, while also monitoring potential buyers or tenants — arts and culture organizations around the city — that might be in danger of being displaced from their current location.

Eng also has to constantly build and update her list of potential funders to finance potential deals. The needs of buyers as well as funders can be very specific, and when a deal comes down the pike she has to know who to call.

“It’s really looking at who is out there, building the relationships, and figuring out when we have a project or suite of projects that are a sweet spot for that particular donor or investor, and knowing when it may be a different sweet spot for somebody else,” says Eng.

There’s no way to do this in the Bay Area real estate market without multiple layers of subsidy, Eng says. It can start with the sellers — who can be long-term property owners in the city who understand the value of selling at a reasonable price. The subsidy layers continue in the rehab and build out costs, including grants from the San Francisco Arts Commission or San Francisco Grants for the Arts, below-market rate interest loans from foundations and tax-credit financing from the city and from the new markets tax credit program. The up-front subsidies lock-in affordable debt payments or lease payments for the partner organizations.

What sets Community Arts Stabilization Trust apart from a conventional real estate operation is the professional networks it represents in its own ranks. The trust has basically brought a staff together of mostly people from all different parts of the arts and culture world who happen to have some experience or interest in real estate. It started with Eng, a professional jazz vocalist who also used to work at a foundation giving out grants to arts organizations in California. Her colleagues so far include dancers, filmmakers, dancers, and one opera singer so far.

“We are not a magic unicorn,” Eng says. “We’ve taken components of real estate and re-coalesced them, the models, the ways of operation, in service of art and culture. People trust us because they know us. It begins in that place, it’s not starting anew.”

There have always been some arts organizations — the infamous “SOBs,” i.e. the symphony, the opera, the ballet — that tend to have plenty of institutional support from their cities or wealthy donors.

But the smaller and often experimental venues that push arts and culture forward, often by challenging the wealthy and the powerful, get taken for granted. Other cities are starting to take note of their plight when it comes to staying in the neighborhoods that they’ve made valuable by their presence.

KQED public radio reported in 2018 that London was “stealing” the idea for the Community Arts Stabilization Trust. Eng rattles off a list of more than a dozen cities that have contacted her and in some cases engaged the trust on an advisory basis to help them create their own versions — including Austin, Denver, Vancouver, and most notably, Seattle, which is in the final stages of establishing its version of the trust, called the Cultural Space Agency.

Seattle’s Office of Arts and Culture first initiated talks with Eng and her colleagues in 2018, inviting Eng to deliver a keynote speech and later working with them to do some financial modeling for the Cultural Space Agency.

“Cultural spaces lay these golden eggs,” says Matthew Richter, cultural space liaison in Seattle’s Office of Arts and Culture. “There’s a nine point jump in walk score for a block with a cultural space. Our position to developers has been grab as many golden eggs as you can, but don’t fuck with the goose while you’re at it.”