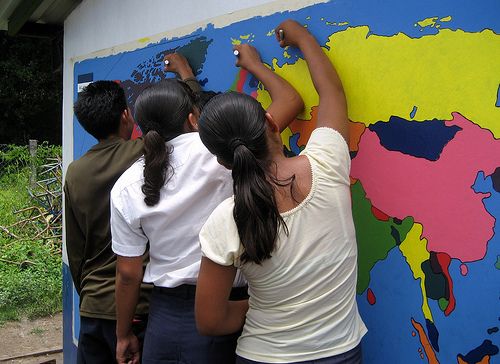 Engaging citizens with maps and markers. Lee Shaver on Flickr

This piece originally appeared on The City Fix.

Urban planners, designers and architects have their work cut out for them. The rate of urbanization around the world means that we have to reconfigure the way we think, design and plan cities. It is not like starting from scratch on a clean canvas. Reconstructing existing cities to fit the needs of a larger population will be especially difficult because it will require planners to accommodate the needs of current urbanites, while forecasting the needs of future urbanites. It will require a balancing act between the environment, public health and mobility, from the design stage all the way through implementation.

This is where participatory maps are an increasingly important aspect of studying and planning more inclusive cities. Inviting residents to participate in map-making gives them a voice in the spatial planning process. It also provides insights into how they use their cities—where they live, where they work, where they cycle. Take, for instance, the incredible map made by Anton Polsky, a Russian artist who goes by the name “Make” and is the founder of a participatory urban re-planning website.

In 2010, Make designed and shared a map, which he calls “USE/LESS,” to bring to attention the dismal circumstances cyclists had to endure in his hometown of Moscow. Using the resources and opportunities available to him, Make created the map and designed a second online version to crowd-source the marking of cycling routes, dangerous roads and bicycle parking spaces. The map received a lot of support and attention from urban residents and the media, and it became part of an alternative vision for the city, called “Moscow 2020.” This is just one incredible example of participatory community mapping, which uses art as a method to engage citizens on important urban issues.

There are also efforts to map cycling routes in China, which is important given that many Asian cities—particularly in India and China—are seeing a reverse trajectory: A shift away from walkability, pedestrianism and cycling that instead promotes and facilitates car driving.

Participatory mapping and spatial planning are also important and effective as visual and spatial tools that build rich urban fabrics. The “What Shape is Bushwick” mapping project in Brooklyn, New York, for instance, is a good example of mapping and participatory sewing.

With the multidimensional complex challenges facing the world today, participatory maps provide a unique way of engaging citizens, and they are a means to promote creative, relevant solutions to problems facing our urban future. Livable and humane cities require inclusive and participatory planning, where the voices of urban residents and their shared vision for the future can effectively materialize.