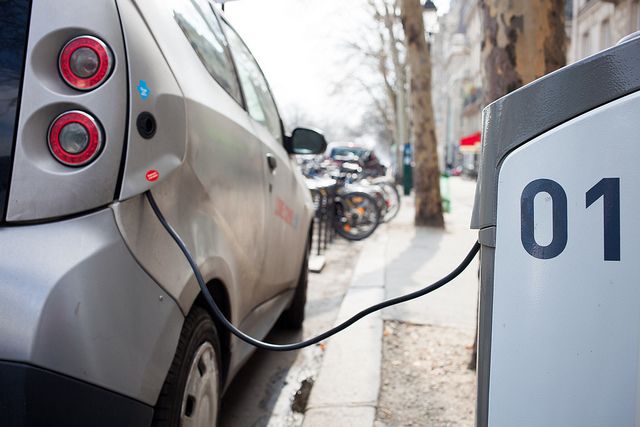 Last week, the Palo Alto Daily News reported that the Bay Area city is set to become one of the first in North America to require that newly built homes accommodate electric car chargers. The city council unanimously approved the changes to the building code, which should add around $200 to the construction price of a house.

The code revision should come as music to the ears of Tesla Motors, an electric car company headquartered in the wealthy peninsula suburb. The council also voted to streamline the permitting process for charging stations, with one councilmember noting that a local Unitarian Universalist church had to pay $459 for such a permit.

It’s unclear if Palo Alto is the very first town in the U.S. to require electric vehicle chargers in all new homes, although the much larger Canadian city of Vancouver already requires it for new homes and multifamily properties.

While Palo Alto seems eager to mitigate the environmental impact of personal vehicles, it draws the line at any rule changes that would make it easier for residents to not own cars in the first place — a far more environmentally sound practice, given how much ecological damage caused by cars emanates not from the tailpipe, but from the sprawling, unwalkable land use patterns that mass car ownership requires.

Palo Alto’s zoning code still requires all new single-family homes to come with at least two parking spaces, one of which must be covered. Multifamily properties must provide anywhere from 1.25 spots for studio apartments to two spots for units with at least two bedrooms.

In some ways, Palo Alto is actually moving backwards on parking policy. After passing the electric car charging rules, the city took aim at laws that eased minimum parking requirements for some developers in the downtown core, as the Daily News reported:

On Wednesday, the Planning and Transportation Commission backed a city staff proposal to scrap a handful of provisions that developers can use to build fewer spaces than would otherwise be required.

Chief among them is an ordinance that allows a developer to ignore floor area equal to the size of the lot when determining how much parking to provide. For example, on a 10,000-square-foot property, no spaces would be required for the first 10,000 square feet of building.

An economist like Donald Shoup might suggest that charging for on-street and municipal garage parking would be the best way to moderate demand and encourage people to walk, bike and make use of the Caltrain commuter service (currently undergoing upgrades to the tune of $1.5 billion). But one economist on the Palo Alto City Council saw only supply-side solutions.

“Exemptions are paid for by others,” Councilmember Greg Schmid, formerly of the Federal Reserve Bank of New York, said during a debate about the proposal last year. “They don’t come out of some secret fund that the council has or the council’s discretionary fund. They come out of the economic uses by others.”

So as long as your idea of environmentalism involves two electric cars in every home, Palo Alto is at the forefront of the movement. All others are invited to live in San Francisco.