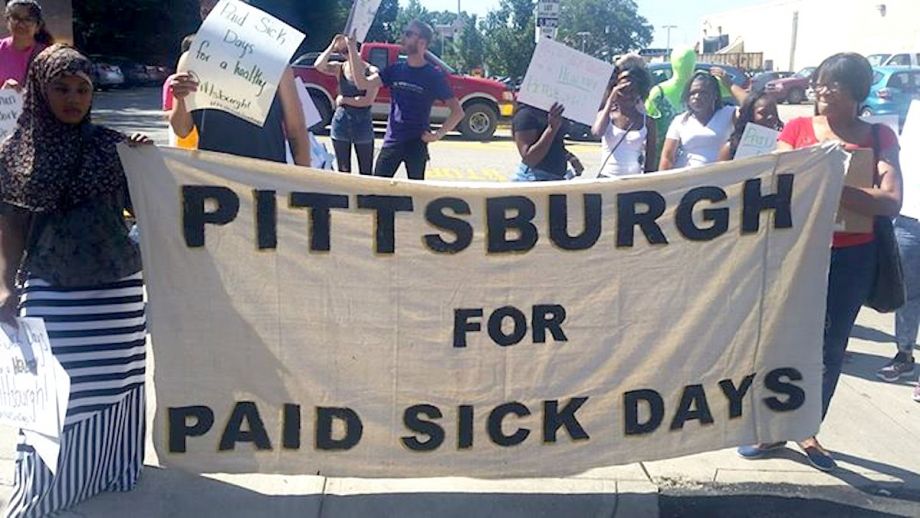 With more than 43 million private sector workers in America unable to take sick days, and the federal-level Healthy Families Act remaining on the table, city-level activist groups and policymakers across the U.S. continue to take initiative on an issue that’s not just about fair workers’ rights but also public health.

Earlier this month, workers in Pittsburgh scored a victory with the passage of a paid sick days bill, just a month after its introduction in city council.

The bill, which passed 7-1 with one abstention, requires employers with 15 employees or more to provide as much as 40 hours of paid sick time per year, while employers of fewer than 15 people will be required to provide up to 24 hours per year. Pittsburgh Mayor Bill Peduto, who ran for office on a progressive track record and platform, is expected to sign the bill, in the face of assurances from business groups that a legal challenge is on its way.

With Peduto’s signature, Pittsburgh would become the 19th city in the nation to institute a mandatory paid sick leave law, along with four states and one county. At least 49,000 Pittsburgh workers will gain access to paid sick leave, the majority of them in low-wage service sector jobs in industries like food and healthcare.

The bill’s passage was the result of a campaign orchestrated by Pittsburgh United, a coalition of labor unions, community groups, environmental groups and religious institutions in Pittsburgh.

“For over a year now, we’ve been working together to support various worker organizing struggles like fast food workers, hospital workers, adjunct professors, janitors, security guards, all working together and supporting each other,” says Alex Wallach Hanson, the organizer with Pittsburgh United who served as the paid sick leave campaign point person. “A few months ago there was a real desire to take on something that was even broader.”

Several factors helped fuel the urgency of the campaign, which enlisted more than 25 supporting organizations, starting with Pittsburgh United’s coalition members, and branching out to public health groups, women’s health groups including Planned Parenthood, and others.

As the final draft of the bill reads, “many of the workforce members who lack access to paid sick days frequently have contact with the general public, posing a high public health risk and increasing the likelihood of transmission of communicable illnesses.”

“We used to be a steel town and now we’re a town whose economy is driven by ‘eds and meds,’” Wallach Hanson says. “An eds and meds economy is one that is really divided between those at the top who do really, really well, and a lot of service sector workers at the bottom who really don’t do well in terms of the salaries and benefits that they make.”

Timing and politics also helped. Philadelphia’s own paid sick law went into effect this month, providing some friendly rivalry from across the state to nudge policymakers and stakeholders along. (A Pennsylvania state paid sick leave bill was introduced in July.)

“Poll after poll shows that there’s broad support for paid sick leave at the national level,” says Rachel Lyons, senior government affairs manager for the workplace program at the National Partnership for Women & Families, based in Washington, D.C.

“When you mention that, for example, most restaurant workers don’t have access to paid sick leave, people have a very visceral reaction to it and understand that at that level they don’t want anybody sneezing on their burgers and fries,” Lyons adds.

The Partnership recently released 50 state fact sheets on paid sick leave access, focusing on the individuals and industries most affected by the nation’s lack of a paid sick days standard, including children, restaurant workers and low-wage workers and their families.

But it’s not all bad news. “We wanted to draw attention to the growing momentum behind paid sick days around the country,” Lyons says. “We’re seeing so much success at the state and local level.”

Rev. Rodney Lyde from the Pennsylvania Interfaith Impact Network speaks at the press conference and rally announcing the formation of the Paid Sick Days coalition in Pittsburgh. (Photo by Samey Jay/Pittsburgh United)

Momentum is a precious resource. Each victory can build toward the next. The story behind Pittsburgh’s campaign for paid sick leave is a testament to that.

After a major 2014 campaign for higher wages at the region’s largest employer, UPMC, Pittsburgh United started organizing monthly “worker organizing tables,” gathering all of the above groups on a regular basis to discuss ways to support each other. It was out of those conversations that the campaign for paid sick leave emerged.

“Really the trust that gets built over time is what allows us to do things like initiate a campaign and pass legislation on paid sick days in just about under two months,” Wallach Hanson says. “And it doesn’t stop at paid sick days. That’s just one more piece of how to create an economy that works for everyone here in Pittsburgh.”