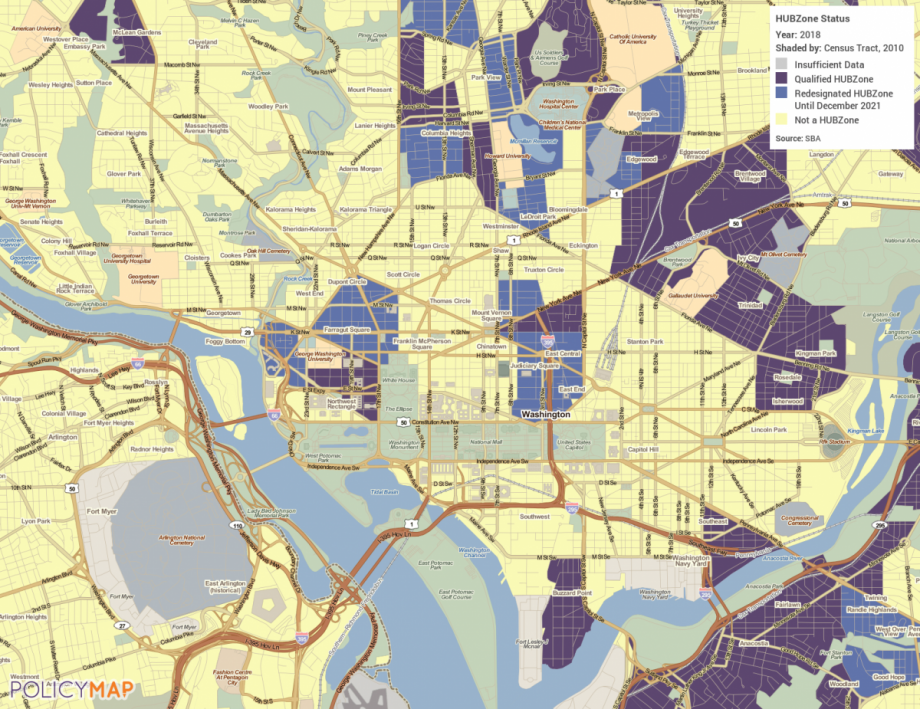 Even based on SBA's 2018 data, neighborhoods that have seen significant development have been “redesignated” as HUBZones until 2021. (Map via www.PolicyMap.com)

In the D.C. area alone, $540 million in federal contracts meant for firms in underserved neighborhoods went to businesses in wealthy neighborhoods from 2000 to 2018, the Post found.

The program, called Historically Underutilized Business Zones, or HUBZones, relied on 1999 data to determine which regions were considered underutilized. As anyone who has been to D.C. in the last two decades can see, the District has changed significantly since 1999, including where wealth and commercial activity are situated. As one example, the census tract that includes Chinatown had a poverty rate of 31 percent in 1999. By 2010, the poverty rate was 5 percent. In 2012, as HUBZone boundaries were updated, Chinatown was allowed to remain in the program under a three-year grace period. Then, multi-year contracts meant that businesses could continue to earn millions even after the HUBZone designation was dropped.

The Small Business Administration, which runs the program, didn’t dispute the findings, but didn’t comment further.

Last week, Chicago held a lottery to determine which pot operators would be allowed to open in the city when marijuana is legalized Jan. 1. Those operators, Block Club Chicago reports, appear to be overwhelmingly white and male, based on a photo of the room that circulated on social media.

As Next City has previously reported, Illinois’s act legalizing marijuana was meant to bring an equity lens to dispensary licensing processes by establishing a preference for new licenses to “social equity” applicants. Friday’s lottery was only for companies that already operate medical marijuana dispensaries in the state; another lottery will be held next year to new firms. Why? “We just want to make sure we have the industry locked [d]own” and that it’s safe, Gov. J. B. Pritzker said Wednesday, according to WTTW.

Activists are hoping they see more faces of color in the next set of applicants.

Until then, to prevent existing dispensary operators from getting a head start, Alderman Jason Ervin (28th) told Block Club Chicago that he plans to introduce an ordinance to postpone marijuana sales until July so that equity concerns can be addressed. “Again, there are no African-Americans in this mix and so we will continue to push forward an outright ban until social equity applicants come in,” he said.

Baltimore Museum of Art director Christopher Bedford said Thursday that every artwork the museum buys in 2020 will have been created by a woman, the Baltimore Sun reports.

“This how you raise awareness and shift the identity of an institution,” Bedford told the paper. “You don’t just purchase one painting by a female artist of color and hang it on the wall next to a painting by Mark Rothko. To rectify centuries of imbalance, you have to do something radical.”

The exhibition schedule for 2020 also includes female-focused shows: Nineteen of the 22 shows will show art exclusively by women. One will focus on how male artists perceive women, and the last will honor Adelyn Breeskin, the longtime director of the BMA.

The new focus on women artists builds on the museum’s announcement last year that it would sell seven works of art by white men so it could afford to buy art by women and artists of color.