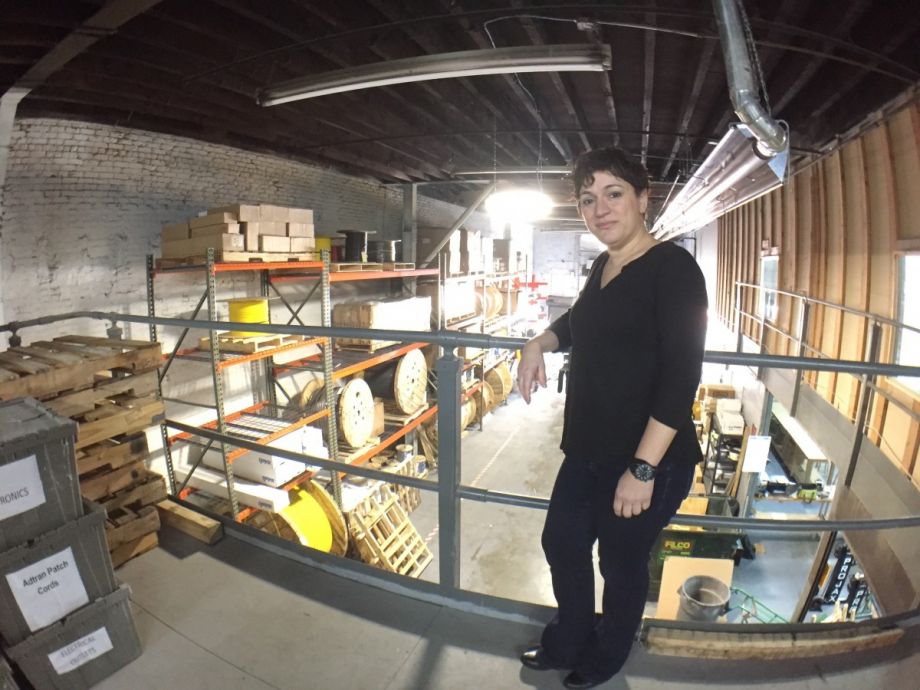 Nellie Torres grew up in the Brooklyn neighborhood of East New York, in the Unity Plaza public housing community. She’s the sixth of seven siblings. Her niece attends the same grade school she did, and once took out a library book and found Torres’ name still on the sign-out card.

These days, Torres’ name is more likely to be seen on contracts, fiber cable orders, work plans, safety plans and paychecks. She’s the founder and CEO of ProjectSpan, one of the 15 percent of private construction companies owned by women in NYC.

Started in the early 2000s, ProjectSpan now has 22 employees. Their first big job was working on the new subway line extension from Times Square to the Jacob K. Javits Convention Center on the far west side of Manhattan — the city’s first new subway station in 25 years. One of ProjectSpan's specialties is building and testing the communications networks that help power some of the NYC subway’s most modern features, like countdown clocks, help points, and reliable underground radio communication for police and other first responders.

“I’ve been doing transit work for 20 years, some of my staff longer than that,” says Torres, who started out as an intern in the accounting department of a local construction firm while she was still a high-school senior.

As documented in “Breaking Through: Harnessing the Economic Potential of Women Entrepreneurs,” a new report this month from the Center for an Urban Future, Torres is also part of a rising tide of women entrepreneurs in NYC. (The study was made possible through Capital One’s Future Edge initiative.) Torres was one of the many women entrepreneurs, venture capital portfolio managers, technical assistance providers and others interviewed for the report.

According to “Breaking Through,” from 2002 to 2012, the most recent year for which rigorous data is available, the number of women-owned businesses grew by 65 percent, adding more than 56,000 jobs and $3 billion in payroll to the city’s economy. More than 62 percent of all new businesses formed in NYC from 2002 to 2012 were women-owned businesses, bringing the total proportion of NYC businesses owned by women from 32 percent in 2002 to 40 percent by 2012.

In interviews across NYC, CUF found that the city’s growing immigrant community is spawning thousands of businesses, with women starting companies out of their kitchens and living rooms often to provide or supplement family income or as alternatives to low-wage jobs. Meanwhile, many women like Torres are taking experience from working in larger, established firms and venturing out onto their own in industries like fashion, food, tech or construction. 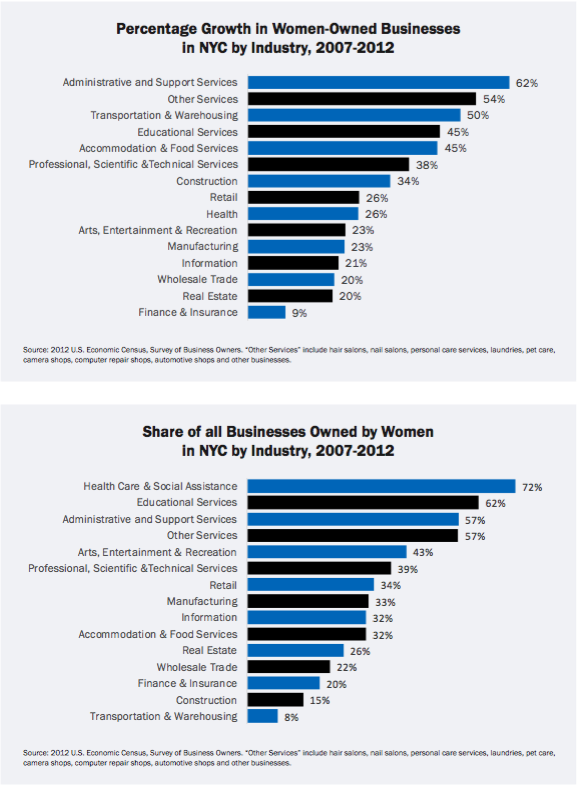 And yet, women-owned businesses have plenty of room to grow. As “Breaking Through,” found, 91 percent of all women-owned firms in NYC have no paid employees, their growth limited by lack of capital, lack of training, and limited access to networks and connections needed to grow. According to the report, if only one-quarter of the 376,405 women-owned businesses in New York City with no employees added a single employee in the next three years, it would result in more than 94,000 new jobs.

Registering or certifying as state or local MWBEs (minority- or woman-owned business enterprises) or federal DBEs (disadvantaged business enterprise) has been billed as a way for woman- and minority-owned firms to overcome a lack of networks and connections. Not too long ago, however, many, including Torres, found such programs ineffective, as poor auditing and enforcement meant most larger firms seeking MWBE or DBE subcontractors looked at the relationships as a mere formality. Torres remembers getting calls from firms perusing MWBE databases, but the firms weren't offering meaningful work. They just wanted someone to sign off that they were paying an MWBE for the hours. It was so disappointing, she even made it the subject of her masters' thesis.

“I started out thinking it’s a horrible program, and it’s not helping the people it’s meant to help and it should be scrapped,” Torres remembers. “I was very disillusioned with it.”

As she conducted her thesis research, she concluded it was a necessary program, but could be much improved. “I realized that disparity is such that without the program, there wouldn’t even be the limited successes we have now. I firmly believe that,” Torres says.

Torres was busy working on a project for another construction firm, helping build the new Yankee Stadium, when things started to change. It was around 2004. “At some point, there was a shift. Firms started looking for companies that offered real service and real work, so they could pass an audit,” she recalls. “Fraud is still a very real problem, but I feel they’re doing a much better job weeding that out now. It’s become more focused. We have audits and site visits and vetting all the time.”

Access to capital is another part of the landscape that has changed dramatically over the past 15 years for women entrepreneurs in NYC. “Breaking Through,” cites the Business Center for New Americans, BOC Capital Corporation and Grameen America as examples of microlending organizations providing capital to NYC women entrepreneurs — who banks aren’t interested in serving, often due to the smaller loan sizes they typically need. Those organizations began making microloans in NYC in 1998, 2001 and 2008, respectively.

BOC Capital Corporation's lending programs include a construction loan program, which provides upfront capital based on the firm having landed a city construction contract. That program actually grew out of their order-based loan program, which originally focused on small, usually home-based fashion designers needing to ramp up production after landing an order from a local retailer. These kinds of upfront capital programs are crucial in communities of color, given the huge racial wealth disparities that mean such communities don't have equal access to friends-and-family capital.

“Historically, if you’re poor or a minority, it’s kind of a vicious cycle, you don’t have the background or family money to tap into,” Torres says.

In addition to appropriately sized loans, those same organizations also provide significant technical assistance, helping women (and minority) entrepreneurs through the process of turning small, home-based businesses into professional operations with proper accounting and the ability to grow and take on paid employees.

“When I got started on my own, I didn’t know these resources existed,” says Torres, who funded her business out of savings along with one of her mentors as a business partner (whom she later bought out). She also got a small SBA loan early on.

The CUF report also notes networking, coaching and mentoring are essential for reducing gender disparities in industries that are still male-dominated and often higher-paying, such as finance, tech, real estate or construction. In almost any industry, the report notes, women have to overcome gender stereotypes that discount their talent and commitment. Women earn nearly 60 percent of bachelor’s degrees, 59 percent of M.A.s and 52 percent of Ph.D.s, but they still have to fight the perception that female founders are less capable and less committed than their male counterparts.

“In construction, you have to develop a thick skin. You want to be part of the boys' club, but you want the boys to change,” says Torres. “I’d love to mentor and actually help someone get through what I went through. That seems to be a natural progression.”