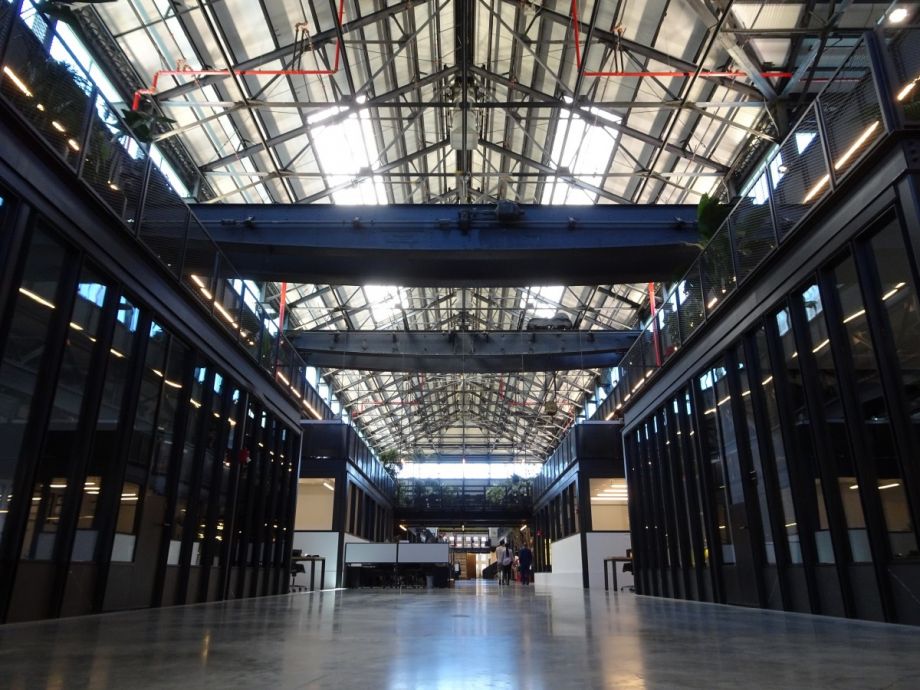 The Brooklyn Navy Yard launched its first ship, the USS Ohio, on May 30, 1820. In that same year, the U.S. outlawed the international slave trade, and made the practice punishable by death. The Ohio was eventually deployed to the waters off the coast of Africa to suppress the slave trade.

In its heyday during World War II, some 70,000 were employed at the Brooklyn Navy Yard, including many women employed for the first time, as mechanics and technicians. For decades, the 40-acre shipyard served as a key hub for the major manufacturing corridor along New York City’s East River waterfronts of Brooklyn and Queens.

Last week, a group of people attending the 2017 Urban Resilience Summit in New York City toured the site and learned how, despite manufacturing and shipbuilding leaving NYC, the Brooklyn Navy Yard managed to survive and eventually thrive once again as an economic hub. (Part of the Rockefeller Foundation’s 100 Resilient Cities initiative, the summit gathered chief resilience officers and some of their staff from cities around the world.)

“Hundreds of thousands of people used to work along the waterfront. Immigrants knew the Brooklyn waterfront was the place to go to find good jobs and work your way up into the middle class,” said David Ehrenberg, president and CEO of the Brooklyn Navy Yard Development Corporation (BNYDC), which manages the site on behalf of its owner, the city of New York.

When the U.S. Department of Defense closed down the facility in 1966, 9,000 people lost their jobs. “By the 1970s and 1980s, there were maybe a hundred people working here,” said Ehrenberg, who grew up in Brooklyn. “It was a gut punch to the Brooklyn economy.”

Today, inside the Brooklyn Navy Yard’s 60 active buildings, around 400 tenant businesses employ roughly 7,000 people — double the number from 15 years ago. Buildings currently under construction, renovation or development will push that number to around 17,000 over the next four years. Sweet & Low shutting down its Brooklyn Navy Yard packing facility last year hardly put a dent in the progress.

Ehrenberg pointed to BNYDC’s corporate structure when explaining the secret of the Brooklyn Navy Yard’s resurgence. As a nonprofit, it has some freedom and flexibility that it wouldn’t have as a government agency or a for-profit business.

NYC isn’t alone in designating a nonprofit to steward a massive piece of land for the purpose of economic development. Patrick Brown, chief resilience officer for St. Louis, was on the tour and he brought up the Cortex Innovation Community. The city of St. Louis gave powers of eminent domain to Cortex, along with the power to abate taxes, and to approve or reject building plans within the specified district between St. Louis University and Washington University.

Even within NYC, BNYDC is not alone. The city has also worked with nonprofits like Evergreen Exchange and Greenpoint Manufacturing and Design Center to manage or develop land for industrial use.

One of the most important ways a nonprofit developer can help with industrial development is being able to pick tenants that may not necessarily pay the highest possible rent, but may hire the maximum number of people or present the fewest barriers to employment.

“A typical private owner could just take the highest bidder, while a nonprofit can decide who is going to create the greatest job density, who is going to hire locally, who is going to use sustainable manufacturing processes,” said Adam Friedman, executive director of the Pratt Center for Community Development, in an earlier story I reported on nonprofit industrial development in NYC.

In BNYDC’s case, Ehrenberg said, “we look for companies that need to be in New York, and who might need a friendlier nonprofit landlord that can help them grow.”

One of those ideal tenants has been Steiner Studios, which is behind TV series and movies like “Boardwalk Empire,” “Girls,” “30 Rock,” “Wolf of Wall Street” and more. On any given day, between 2,000 and 2,500 workers are on Steiner’s portion of the campus, about half of them handling wardrobe or doing carpentry and set construction, set decoration, or entry-level production assistant jobs, according to Clare Newman, chief of staff and executive vice president at BNYDC. Many of those jobs are union. Steiner started out with five studios, currently has 15, and is expanding.

Once BNYDC identifies an ideal tenant, “the way we think about rents is what is affordable to a manufacturing company, not what is market rent,” Ehrenberg said. That doesn’t mean they’re OK with losing money — BNYDC typically generates positive cash flow from operations, including $9 million positive cash flow in fiscal year 2016. But all of that goes right back into developing more space on the campus.

“We are not focused on making a profit, but for every tenant in our space there are 20 or 50 others out there who want in,” Ehrenberg said. “So if we don’t make a profit we can’t develop the next building to make space for them.”

BNYDC is currently renovating what it calls Building 77, a 1-million-square-foot building that will include a food manufacturing hub, a STEAM (Science, Technology, Engineering, the Arts and Mathematics) center that will provide career and technical education for 400 NYC public high school students a year, and large spaces for tenants that are outgrowing their current spaces on the campus — like Farmshelf, currently a member of New Lab, a co-working and co-manufacturing community that opened last summer. Farmshelf’s new space in Building 77 will allow them to expand into mass production.

Building 77 will add an estimated 3,000 more jobs to the campus. It’s also the last existing building at the yard to be renovated. Additional space is coming from new construction also in development. In BNYDC’s last three renovation projects, it awarded around 35 percent of construction contract or subcontract value to minority- and women-owned businesses, worth about $65 million in contracts and subcontracts.

Tenants get access to BNYDC’s on-site employment center. Around 2,000 people walk through the center’s doors each year, and 322 local hires were placed last year, 20 percent of them from one of the three public housing complexes within walking distance of the campus. The average wage for employment center placements is $17 an hour, according to BNYDC. The funding for the center comes out of BNYDC’s own rental income, Ehrenberg said.

The Brooklyn Navy Yard’s journey back from blight wasn’t a straight path, Ehrenberg explained. After the city purchased the property from the federal government in 1970 for $2.6 million ($16.4 million in today’s dollars), it brought in a large commercial shipbuilder. Things didn’t work out, and in 1975 the shipbuilder laid off 3,250 workers. Even after $40 million in federal loans to try to keep it afloat, it closed down in 1979. In 1981, under Mayor Ed Koch, the city turned over the property to the newly created BNYDC, which also promptly shifted strategy to focus on smaller employers, subdividing some of the massive buildings on the campus into smaller spaces.

Since then, along with city capital dollars, BNYDC has leveraged $1.2 billion in private investment to upgrade and modernize over 4 million square feet of space, with investments in the pipeline that will take that dollar amount north of $2 billion, according to Ehrenberg. New Markets Tax Credits and Historic Preservation Tax credits have helped attract financing too.

The shipyard’s resurgence is a model in so far as there’s such spaces to work with, of course, and development pressure in New York City is leading to the broader loss of land available or zoned for manufacturing. The Pratt Center for Community Development looked at all 95 rezonings in the city from 2003 to 2008, and found that one-quarter of them converted industrial zones to residential, commercial or mixed use. Many of those former industrial zones were right along the Brooklyn and Queens waterfronts, now lined with luxury condo high-rises. The city wants to convert manufacturing zones along Jerome Avenue in the South Bronx to mixed use or residential too, which would displace most if not all of the 150 auto shops along that corridor.

And that’s not all: The city’s zoning code allows for a wide variety of uses on land zoned for manufacturing, allowing property owners to cash in on development pressures by building hotels or self-storage facilities where there were once factories or at least factory space that could be adapted the way the Brooklyn Navy Yard was adapted. The city has been toying with measures to curb the conversion of manufacturing space to hotel or self-storage space, but has made limited progress so far.