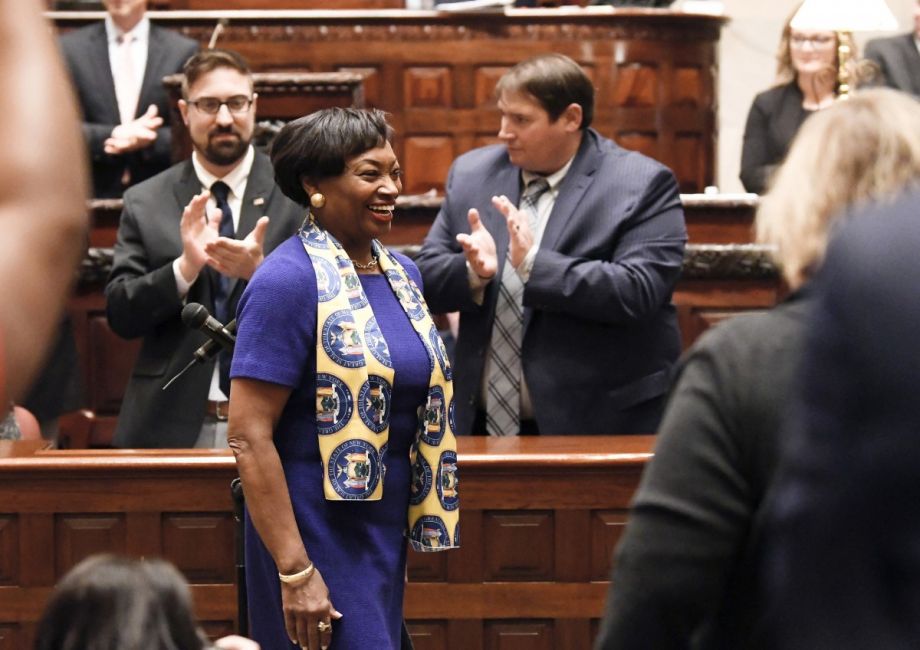 Newly-elected Senate Majority Leader Andrea Stewart-Cousins, D-Yonkers, receives a standing ovation as she prepares to speak to members of the state Senate during opening day of the 2019 legislative session in the Senate Chamber at the Capitol on Wednesday, Jan. 9, 2019, in Albany, N.Y. (AP Photo/Hans Pennink)

New York Governor Andrew Cuomo delivered his annual state of the state address on Tuesday, Jan. 15. This year’s edition came at a particularly interesting moment. Candidates have started to jockey for position in the 2020 presidential race, and a “blue wave” has swept Democratic majorities not only into the U.S. House of Representatives, but New York’s state legislature as well. Democrats control the state house and senate in Albany for the first time since a brief period in 2009-2010.

The Democratically-controlled N.Y. state legislature has already taken historic steps; Democrats chose State Senator Andrea Stewart-Cousins as the first woman — and first African-American woman — to lead a chamber of the state house, and the upper chamber at that. Democrats now control the Governor’s mansion and both houses of the state legislature, and progressive activists and organizers are gearing up to finally score some victories on long-fought battles over everything from voting rights to criminal justice reform to marijuana legalization to renewable energy to — chiefly — overhauling and expanding the state’s rent-regulation laws, which tenant organizations and researchers view as tragically ineffective.

Under Stewart-Cousins, N.Y. state legislators have already gotten off to a running start, passing measures to approve early voting, pre-registration of minors, and voting by mail. They’ve also closed a key campaign-finance loophole that has made it easy for deep-pocketed donors — especially those affiliated with the real estate industry — to pour unlimited amounts of cash into the campaign coffers of state and local legislators. The legislature followed that up with passing a measure to ban “gay conversion therapy,” and then passed the Gender Expression Non-Discrimination Act, known as GENDA, which adds gender identity as a protected class in housing, employment, and public accommodations.

The governor’s Tuesday address called for legalizing marijuana for recreational use among adults, less than two years after Cuomo called marijuana “a gateway drug.” The governor offered an estimate that legalizing and taxing the product (which neighboring New Jersey is also considering) will eventually result in $300 million in annual tax revenues. In a nod to advocacy groups and a few legislators who have called to include such measures as part of marijuana legalization, the governor also mentioned sealing court records related to prior cannabis-related incidents — though he was short on specifics.

On climate, the governor proposed making the state entirely reliant on carbon-free electricity by 2040 — which would put it ahead of California’s recent announcement to do so by 2045. More significantly, when it came to addressing climate change, the state of the state address revived a proposal to institute congestion pricing, charging drivers for entering the busiest parts of Manhattan during the busiest times of the day.

But it’s overhaul and expansion of rent regulation that are likely to cause the most drama over the next few months. New York’s rent regulation laws are up for renewal this June.

As Emma Whitford reported for Curbed NY last year, tenants have been organizing across the state to expand rent regulation to places such as Rochester, Buffalo and beyond where low-income tenants frequently find themselves at the mercy of rent hikes and tenant harassment in the form of frivolous eviction proceedings and neglected repairs. Currently, New York’s rent regulation laws only apply to New York City and its three nearest suburban counties.

Meanwhile, in those places where New York’s rent-regulation laws do apply, loopholes created in 1990s state rent regulation laws have resulted in the conversion of nearly 300,000 rent-regulated apartments into market-rate units, notes a new report from the Community Service Society, a nonprofit research and advocacy organization. The report describes how the New York state rent regulation system functions today, its evolution over time, and compares it to other forms of rent control in the United States. Currently, around 966,000 New York-area apartments (45 percent of the rental market) are classified as rent stabilized, primarily in buildings built before 1974 that house six or more apartments.

As Rebecca Baird-Remba reported this week for the Commercial Observer, it’s not the first time state legislators have shown an interest in closing the rent regulation loopholes, but usually, those efforts passed the assembly and died in the senate. Some of the new Democratic state legislators also support expanding rent control to the entire state. Part of the battle for rent regulation will also be whether to increase funding to enforce the state’s regulations, some of which are easily skirted, Baird-Remba also reported.

But even with a Democratic monopoly in the state house and the legislature, and tenant organizers across the state supporting them, real estate industry lobbyists will have their say still. As ProPublica reported in 2016, the real estate industry has used deep pockets to maintain a stranglehold on Albany for years.

The battle for expanding and overhauling rent regulations in 2019 may hinge on whether Governor Cuomo signs the measure to close the key campaign-finance loophole that the state legislature already passed this week. Known as the “LLC Loophole,” it allows individuals to donate to candidates using an unlimited number of registered limited liability companies, or LLCs. This enables each donor to circumvent individual campaign contribution limits by donating through multiple LLCs under their control, without having to disclose their ownership of those LLCs. It’s the perfect loophole for the real estate industry, because most developers create at least one LLC for each individual property they develop.

An investigation by City Limits last fall found that, since becoming a vehicle for campaign donations in the late 1990s, the LLC mechanism has generated at least $188 million in donations. LLC donation activity has increased steadily during each election cycle, the investigation found, and some 6,600 candidates and committees have received LLC donations during that time — from candidates for town supervisor and judge to those seeking state senate seats and the governor’s mansion. Notably, just 35 candidates or causes received nearly half of that total. The top recipient? City Limits found it was Governor Andrew Cuomo himself when combining his campaign for attorney general in 2006 and then his three runs for governor. Cuomo has received roughly one of every eight dollars donated by LLCs.

In his Tuesday address, as he has said previously, the governor stated his support for closing the LLC loophole.