Can NYC Create a New Neighborhood Without Displacing an Old One? – Next City

Can NYC Create a New Neighborhood Without Displacing an Old One? 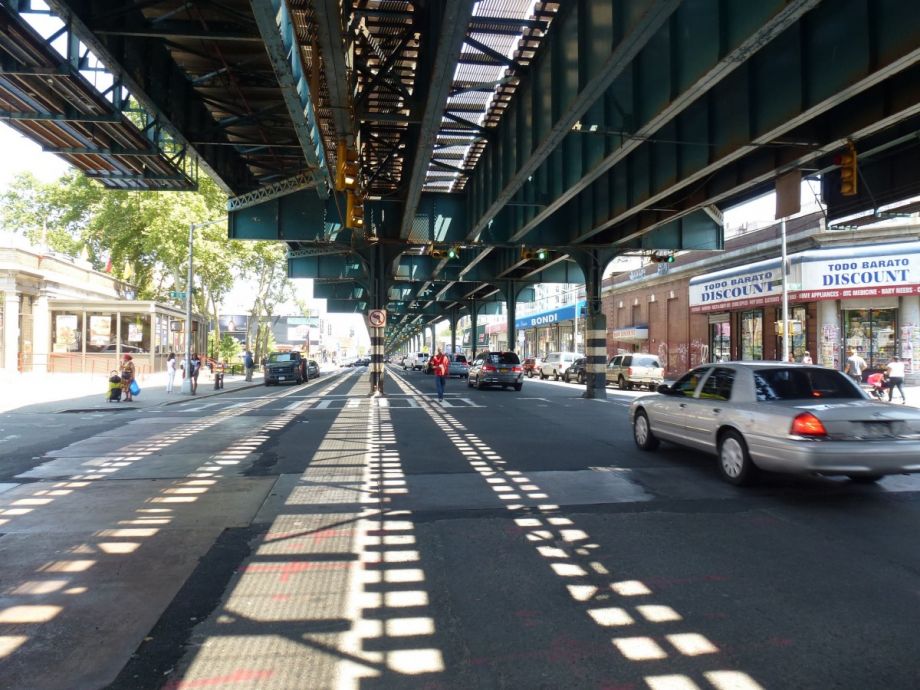 With a nod to Mayor Bill de Blasio’s affordable housing plans, New York City’s Department of City Planning is inventing a “new neighborhood” to take what it thinks is a promising section of the Bronx from parking lots to high-rises. While the city has promised to make community outreach a cornerstone of its plans, the idea of a “new neighborhood” has left many who live there seeing Brooklyn-infused foreshadowing.

In October, the department conducted a walking tour for local residents and business owners of a 73-block corridor of a South Bronx neighborhood that starts a few blocks north of Yankee Stadium. City officials pointed to parking lots ripe for development and myriad public transit options that they think make the neighborhood ripe for revitalization.

“The zoning hasn’t changed since 1961,” says Paul Philps, a senior planner with the city who is overseeing the Cromwell Jerome project. “It’s time to reevaluate and figure out opportunities for growth.”

But the October tour was interrupted by several protesters voicing their concerns about gentrification. The protest was a reminder of the double-edged sword of the city’s recent development push. As New York tries to grapple with both an influx of new residents — its population is expected to increase by almost 800,000 over the next 30 years — and the lack of affordable housing, it has turned to large-scale rezonings in outer boroughs, especially in low-income neighborhoods.

Even though these rezonings are often accompanied by affordable housing mandates, they’ve run up against opposition at every turn. From Flushing in Queens to East New York in Brooklyn, and now to “Cromwell Jerome” in the Bronx, residents and activists have said bringing in new people and businesses, and “beautifying” city streets will inevitably price longtime residents out.

“They’re trying to turn the Bronx into the next Williamsburg,” says Alvaro Franco, an activist with the Bronx-based People Power Movement. “The Bronx today is really seen as the last frontier.”

For activists like Franco, the idea of creating a new neighborhood in the Bronx ignores the fact that one already exists there.

But what does exist is an urban planning nightmare, and some who live and work there recognize the room for improvement.

“More development would be great,” says Susanna Munoz, a manager at Beauty Master beauty supply, located at the southern end of Cromwell Jerome. “It could use more clothing stores, more food stores, things you could only find in Manhattan.”

Traffic is a problem too. An elevated rail line runs straight down the middle of Jerome Ave., with trains causing a deafening roar every few minutes. The pillars of the track cut through every intersection, making it hard for pedestrians to see oncoming traffic. Car repair shops take up many of the storefronts along Jerome, and cars are parked on sidewalks, pushing pedestrians out onto the street.

“Traffic is horrible,” says Luz Rivera, a 20-year-old home health care attendant who has lived in the area most of her life. “Cars are coming from everywhere. It’s hard to cross the street.”

Still, the “new neighborhood” approach rankles others. The car repair places, parking garages and storage units might not fit in with a city planner’s vision of what modern urban living is supposed to look like, but these places provide jobs for Bronx residents.

Places to work are just as necessary as affordable places to live: Nearly 30 percent of people living in the Bronx live below the poverty line, twice the state’s average, and only 18 percent have a college diploma.

“[Auto repair] is one of the few types of jobs that’s not being replaced as much in the Bronx’s economic recovery right now,” explains Geoffery Mullings, a Bronx resident and the editor of local news site The Blinker. “If you bring in housing, even affordable housing, who will be able to afford it if it’s at the cost of jobs? You’re replacing jobs with homes.”

The planning department is still in the early stages of looking into Cromwell Jerome. As of now, there are no plans to rezone auto shops out of the area.

But if one of the city’s last major redevelopments is any clue, auto shops could go the way of higher-end retail and high-rises. In Willets Point — which is in the shadow of New York’s other baseball stadium, Citi Field, where the Mets play — the city is using eminent domain to acquire 61 acres of land for residential and commercial development. Much of that land is currently used by auto shops and other small businesses that employ close to 1,300 workers. Those workers will lose their jobs if the businesses shut down, according to local non-profit Pratt Center for Community Development.

“In the Citi Field expansion, they basically obliterated these immigrant and working-class communities,” Franco says. “The city is only studying [Cromwell Jerome] now, but once they go to the construction stage, they might just eliminate these businesses too.”

While the fate of the area’s auto shops is unknown, those pushing for the Cromwell Jerome development are confident that this time around things will be different. The city has promised to include community members in every stage of the planning process. That, they hope, will quell fears about gentrification.

“It’s an area that’s gone without the resurgence and revitalization that the rest of New York has,” says Jose Rodriguez, the district manager of Community District 4, which encompasses part of Cromwell Jerome. “Gentrification is a big fear, but if we do this from the bottom up like what’s going on right now, hopefully this will happen the right way.”

Peter Moskowitz is a writer based in Brooklyn who focuses on built and natural environments. He’s writing a book about gentrification.