Capitalizing on a New York Neighborhood’s Gentrification – Next City 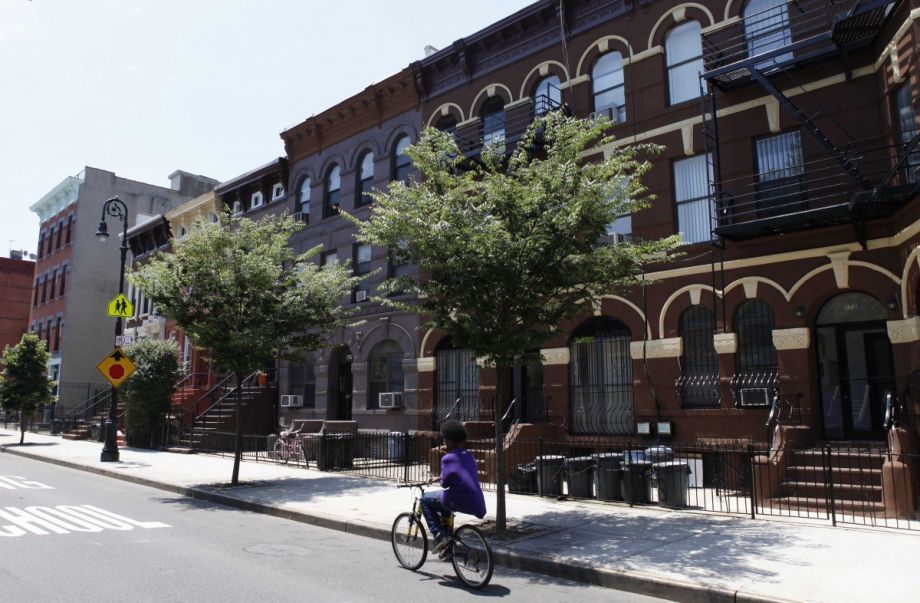 Until a few years ago, “Bedford-Stuyvesant” conjured images of the vibrant brownstones depicted in Do the Right Thing or the gritty “do-or-die” streets that hatched the careers of The Notorious B.I.G. and Jay-Z. Dizzying gentrification has rapidly modified the neighborhood’s image in just the past two or three years. Wealthier (and whiter) people have flocked in, longtime property owners have taken advantage of skyrocketing prices by selling, and low-income renters have found themselves priced out. The median sales price for a house jumped from $455,000 in the second quarter of 2013 to $621,000 in 2014 — 36 percent in just one year. The average monthly apartment rent is up 46 percent over the past five years.

The newly launched CityShares Bedford-Stuyvesant is an investment platform seeking to capitalize on the neighborhood’s sharp growth, and in the countrywide gentrification struggle that is quick to cast its heroes and villains, the role of the new company is yet to be determined.

Founded by former Goldman Sachs analyst Seth Weissman, CityShares has been purchasing multi-family homes in the neighborhood and selling shares of the fund to investors. With a minimum share starting at $100,000, each investor profits from the expected rental income and market appreciation. The success of CityShares Bedford-Stuyvesant will likely lead to the launch of others CityShares in Harlem, Bushwick and Crown Heights.

The idea of a neighborhood investment fund is a twist on an REIT (real estate investment trust), but with an emphasis on giving local details and more granular information to investors, such as building addresses, maintenance costs, payment histories and rent rolls. In an article published on Yahoo Finance, Weissman is quoted as saying, “A CityShares investor will know exactly what buildings he or she is investing in and will be encouraged to visit the properties and ‘kick the tires.’”

Recently, I asked Weissman what he means by “kick the tires.” He denies making the comment, saying, “It’s not like you can show up to a building and just stroll into it.” Instead, he says, “One of the things you can do is, you can walk by the building and see it from the outside to clarify that it’s one of the buildings you own, but you can’t go inside, particularly without approval.”

Gawker published a particularly incendiary post about CityShares’ launch, titled “White Devil Has Great Investment Idea to Ruin Brooklyn Faster.” Sensational headlines aside, CityShares’ marketing does hit a few unsavory notes, like the photo of an affluent white couple on its homepage next to a description of the neighborhood. White people have been a minority in the neighborhood since the 1950s, with the 2010 census listing the population of Bed-Stuy as 70 percent black and 10 percent white. It’s understandable why CityShares’ straightforward intention to profit from the neighborhood’s gentrification and transformation would provoke a visceral reaction from people who are emotionally invested in Bed-Stuy’s place in the black (and Caribbean-American) cultural imagination.

Weissman declares his benevolent intentions, saying, “even though our minimum is $100,000, which is still a lot of money, it’s not one of these larger private equity funds that are looking for investments of one or two million dollars. It’s also less than the cost of buying an apartment or brownstone. Our goal over time is to try and lower that number so we can try and encourage participation in and out of the community, so that we can really attract capital that has an impact focus and is long term in nature.”

CityShares Bedford-Stuyvesant is raising money to purchase properties. Weissman prefers buildings with at least eight apartment units, and is particularly interested in mixed-use buildings located on corner lots. The buildings are to be managed by third-party property managers who have been vetted. Weissman says he intends to activate the ground-floor retail spaces of CityShares buildings (some of which are vacant or had been converted to apartments) in order to revitalize the streetscapes along struggling commercial strips like Malcolm X Boulevard. He’s been in touch with community-based organizations like Bedford-Stuyvesant Restoration and Bridge Street Development Corporation trying to build relationships in the neighborhood.

Emilio Dorcely, president and CEO of Bridge Street Development Corporation, says, “[Seth and I] just had a conversation earlier this week and it was great. He seemed like an intelligent, engaged individual with a genuine fondness for the community and its challenges and dynamics.”

Dorcely was impressed by Weissman’s longterm vision for the community and his effort to reinvigorate storefronts, but also acknowledged issues of building stock scarcity and resident retention in the neighborhood. “Right now we’re in a tough situation as far as real estate development,” Dorcely says. “We have a home-buying education program, where longtime renters in the community go through a rigorous workshop to learn about homeownership. But we’ve found that when they go and look at the available inventory, there’s nothing available to them within the neighborhood, and they end up looking in other areas and other boroughs.”

A middle-class renter looking to buy his first house in his neighborhood has to compete with more than just CityShares. There are the affluent home buyers pushed east from Fort Greene, Clinton Hill, Williamsburg, even Manhattan. But more than that, they have to compete with the mysterious “foreign interests,” and institutional investors like the Blackstone Group and Colony Capital, which have been gobbling up properties all over Brooklyn with all-cash buys and converting single-family homes to market-rate apartments. Last November, a rep from brokerage firm Douglas Elliman estimated as much as 70 percent of the firm’s expected sales for 2014 were to be to hedge funds and other investors. With its appeal to smaller investors who place a value on place, CityShares Bedford-Stuyvesant certainly seems less shrouded.

But it’s not a charity.

“I do a tremendous amount of outreach with the community, so that we are on the same page as far as finding places for business owners [in our buildings], but ultimately we are making these investments with the anticipation of making a return on them,” Weissman says. “We suggest a viable capital expenditure that we have to expect on these buildings, and we certainly charge market rates. We try and find a balance between the two.”

With the anticipation that rents and housing prices will continue to climb for at least 10 years, low-income New Yorkers will likely find themselves squeezed out of Bed-Stuy. When I ask Weissman about the emphasis the Mayor Bill de Blasio administration has made on keeping New York City affordable, he paraphrased Michael Bloomberg to acknowledge that Bed-Stuy has become a “victim of its own success” but that the city could do more to incentivize developers to incorporate affordable and moderate-income apartments in new construction.

CityShares Bedford-Stuyvesant seems to be well on its way to fulfilling its goal of giving interested parties a slice of Bed-Stuy without them having to be hands-on in day-to-day property management. “We have soft commitments for about 80 percent of our buildings so far,” Weissman says. “When we fill that amount, we’re going to raise another fund. We’re going to keep growing for as long as investors are interested in investing in the neighborhood.”

UPDATE: This post has been corrected to reflect that CityShares Bedford-Stuyvesant does not currently own buildings.