Rio Is Debating Creation of a Slavery Museum – Next City

Rio Is Debating Creation of a Slavery Museum 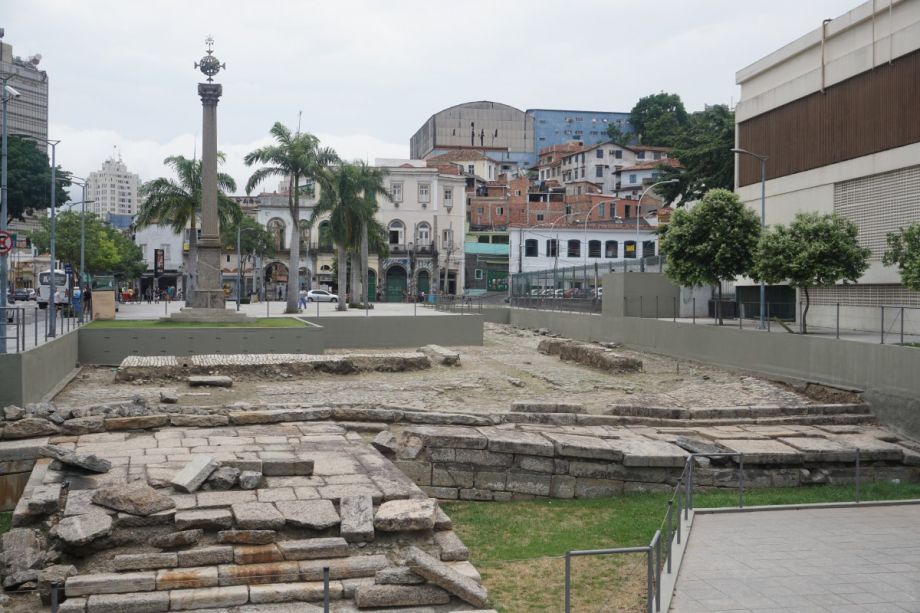 In May, more than 200 young Afro-Brazilians and a few older, well-known black academics filled a lecture hall at Rio de Janeiro’s Federal University. They were there to hear about the possibility of Rio creating a Museum of Slavery and Liberty.

These days a sight like this isn’t so rare, but it’s still not common; Afro-Brazilians started attending college in significant numbers just 15 years ago. A white male Brazilian student moderated the panel of two experts, Cristina Lodi, an architect specializing in cultural patrimony, and Myrian Sepúlveda dos Santos, an academic specializing in the sociology of culture. Both women are white. I, an African-American woman, felt uncomfortable. I tried to imagine a similar scene happening in a city like Baltimore, New Orleans or Charleston, cities whose heritage was steeped in slavery.

The audience listened calmly to Lodi explain the elaborate process of building a museum — the planned community involvement that would be rolled out in coming months, the experts who needed to be assembled, the possible locations that the city was considering. Even the name, the “Museum of Slavery and Liberty,” wasn’t set in stone, she said.

The audience’s questions and comments highlighted the issues and concerns that are being raised and will likely touch this project for the next decade.

“How is it possible that this panel about a Museum of Slavery and Liberty can be composed of just white people?” Leandro Cunha, an Afro-Brazilian photographer, asked.

An Afro-Brazilian elementary school teacher explained how difficult it would be for her young black students to visit a museum named “Slavery and Liberty.”

Finally, Heloisa Helena, an activist known for campaigning against religious intolerance, asked the question that seemed to be on the top of everyone’s mind: “Can you tell me how many black people are working on this project right now?”

Since that tense panel discussion in the spring, questions around building a museum focused on Rio de Janeiro’s slave past have been amplified — even though the debate isn’t the city’s first time grappling with public recognition of its painful history.

In 2011, construction workers accidentally uncovered the Cais do Valongo (Valongo Wharf), which played a major role in the Atlantic slave trade. The wharf area is a likely home for the Museum of Slavery and Liberty. More than 1 million enslaved Africans arrived at the port between 1811 and 1831. Activists and academics succeeded in a campaign for preservation. It was named a UNESCO World Heritage Site in July. With community input, a potential memorial was designed. The city also launched an African heritage tourism trail, renovated a historical cultural center, and began to financially support several cultural organizations, such as the Memorial of the New Blacks. But Merced Guimarães, who founded that museum in her house when she uncovered bones belonging to enslaved Africans during a renovation, says she finds it difficult to fully support the proposed project.

“A museum about slavery cannot hide in its name the historical dimension … it must redefine it,” she wrote in the Globo newspaper. “If the history of slavery is one of violence and the violation of rights, then it’s also one of resilience and indestructibility of the human spirit, the acts of resistance and rebellion, the force to recreate an identity and community; finally the fight to conquer liberty.”

Nogueira proposed that the museum occupy a 19th-century, 150,000-square-foot warehouse designed by black engineer André Rebouças, an unusual feat at the time. But her biggest obstacle might be Afro-Brazilians.

“Their entire existence in Brazil has been tied to the fact that they are descendants of enslaved Africans,” Baroudi says.

The working museum name, in Portuguese, also carries a problematic acronym. Museu da Escravidão e da Liberdade shortens to “MEL,” and contradictory to the Brazil’s horrid reality of slavery, mel means honey in Portuguese. Historians have concluded that slavery conditions in Brazil were among the worst in the Americas (the average lifespan in slavery was 10 to 15 years). The country’s close proximity to Africa made enslaved people cheaper and more easily replaceable.

Another Rio resident who promotes African heritage is wary of a slavery museum. “I want a museum, but not just a museum about slavery,” says Gracy Mary Moreira, who presides over the Casa Tia Ciata cultural center. Tia Ciata, her great-grandmother, was a religious leader whose celebrations led to the creation of samba music. “I want this museum to talk about the achievements of Afro-Brazilians as well,” she says.

Public and private museums about slavery exist in the United States, United Kingdom, France and beyond. The largest physical building dedicated to memorializing slavery opened in 2015 on the island of Guadeloupe (a department of France): the 77,000-square-foot Mémorial Acte. More than a decade in the making, the $90 million center was built near the first French slave port and features a permanent exhibition on the history of slavery, a contemporary art center, and a genealogy center. Guadeloupe is more similar to Rio de Janeiro than Liverpool or Nantes: Its population is majority black. According to Thierry L’Étang, the Afro-French anthropologist who helped to create the museum, Guadoloupéens would find the conversation happening in Rio very familiar.

“As Afro-descendants, we share the same mixed past of oppression, reification, shame and forgetfulness,” says L’Étang. “Many [Guadoloupéens] were afraid of seeing an old question raised that they had tried to forget.”

While L’Étang understands the discomfort, he also sees in Rio’s history a worldwide story that needs to be told. “This wharf is the most important landing point of the transatlantic slave trade and the two Americas,” he says. “It is a historical and cultural treasure, a heritage of humanity that should be valued because it is not fundamentally the particular history of Rio or of Brazil, but that of the world and the five last centuries.”

When the Guadeloupe museum opened in 2015, some residents protested it by highlighting the unfavorable conditions that many face on the island, including high unemployment (among youth and the general population) and illiteracy. The Rio museum proposal presents a similar problem for Rosiete Marinho, an Afro-Brazilian woman born and raised in the Providência, a favela in the port area where she still lives. Her involvement in the community runs deep. She’s president of the Port Zone Bloco League.

“I like the idea but something like this will only be for tourists,” Marinho says. “We need to clean up our own house.”

Crime is on the rise in Rio. Government money is so limited that employees and retirees go months without pay. Providência has seen increased gun violence since last year’s Olympics and a sports park built for the Games in the community has been closed since last year.

Although Marinho supports the continued promotion of the port area’s African heritage and culture, she questions using the word “slavery” in the museum name because of its modern-day applicability.

“Today our children are slaves of drug trafficking, slaves of vices, slaves of the prison,” she says.

In the last month, hundreds of government officials, community members and academics have attended two public hearings to discuss the wharf’s future. Nearly everyone agrees that Brazil should create a significant institution and memorial for the Valongo Wharf. Some even offered up their own unique ideas like the Casa África-Brasil and the National Museum of the Cais do Valongo. But the formal process for mounting the Museum of Slavery and Liberty is picking up steam. The city, led by Nogueira, intends to create a museum working group that will include community members. When the group meets on Sept. 21 for an all-day work session, Gracy Mary Moreira will be there to voice her praises and concerns about the museum’s future and name.

Kiratiana Freelon is a multimedia journalist based in Rio de Janeiro, Brazil. She's currently writing a travel and culture guide to Black Rio.