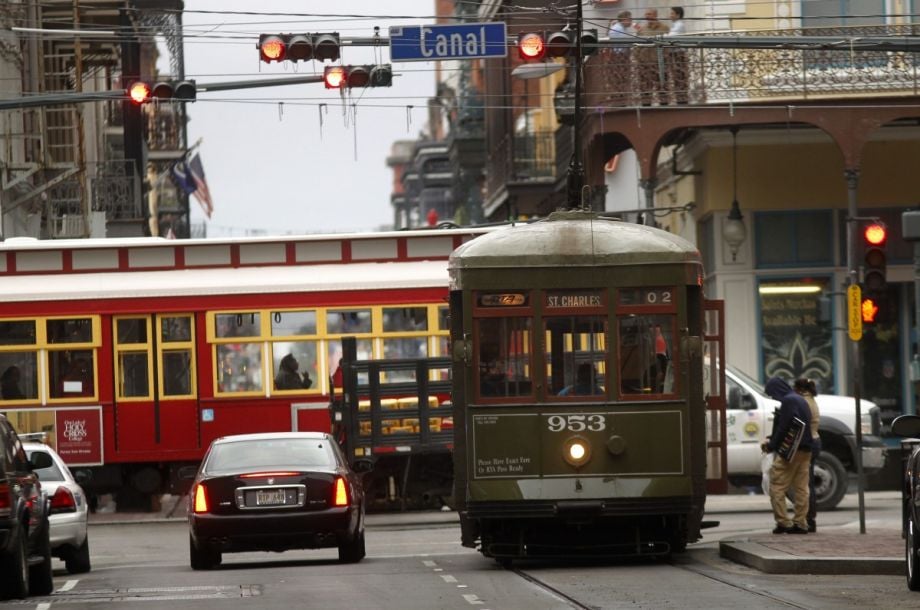 Nearly nine years after Hurricane Katrina, New Orleans has rebuilt a shrunken transit system that prioritizes wealthier and whiter parts of the majority-African-American city, even when post-Katrina population changes are taken into account.

New statistical analyses released today by a non-profit public transit advocacy group Ride New Orleans show that only 36 percent of bus and transit services have been restored across the sprawling city even though more than 86 percent of the city’s population has returned, and the lost services are disproportionately concentrated in areas of the city with a larger proportion of low-income residents and lower proportions of white populations.

In Hollygrove, the largely black, low-income neighborhood where the rapper Lil Wayne grew up, for instance, transit service has been reduced by 95 percent even though about 83 percent of residents have returned.

Meanwhile in the Florida section of the 9th Ward, another largely black, low-income area hit hard by Katrina, transit service has been severed completely. Not even a single bus connects the isolated neighborhood to other parts of the city though 53 percent of the pre-storm population is back, according to 2013 data from the Greater New Orleans Community Data Center.

“We took a close look at the city’s transit service on a neighborhood by neighborhood level and were shocked to find that neighborhoods that need transit the most, that have low-income populations, communities of color, and where access to vehicles is not a given have seen the least amount of transit restored, said Rachel Heiligman, Ride New Orleans executive director.

The finding is among the most disturbing in a report that argues that the New Orleans Regional Transit Authority (RTA) and its private manager Veolia Transportation Services, have not kept pace with the city’s recovery since Katrina and, in fact, are spending more than comparable cities for a transit system that is providing fewer services. Using operations and financial data reported by the RTA, Ride New Orleans found a system on the brink of crisis with so-called legacy costs such as pensions spiraling while revenue levels remain stagnant. The local agency operates at a deficit, and a planned expansion of services combined with other operating and legacy costs could blow a $10 million hole into its budget as soon as 2015.

Other findings suggest that the city may be investing in its iconic green and red downtown streetcars at the expense of the less beloved but more functional buses that serve residential neighborhoods farther from the city’s tourist-trafficked center. Using RTA data as well as data from the National Transportation Database, Ride New Orleans found that in 2012 streetcar trips were at 77 percent of pre-storm levels while only 29 percent of bus services had been restored. The slow-moving streetcars connect uptown New Orleans to the French Quarter, traveling through the city’s most valuable real estate while costing millions more per square mile than buses.

The city is also building a new streetcar line that will connect gentrifying residential areas to the quarter and the Central Business District, a $71 million investment being made with the expectation that it will bring more development and raise property values in the affected areas. (See our Forefront article on the economic development argument for streetcars.)

Heiligman cautions that while the streetcar expansion is exciting, the RTA should remain wary of further streetcar development until adequate bus service returns to neighborhoods in need.

“In recent years, the RTA made great strides in increasing streetcar service and while this is very exciting we know it is the bus service that has been more significantly set back by Katrina and we know that bus service can reach much deeper into neighborhoods at less cost,” Heiligman said. “We want to make sure we’re making decisions that leading to the most equitable outcome for our investment.”

The RTA has not responded to calls about the report but has said in the past that the agency doesn’t have the resources to provide the level of service it had before the storm and that buses must service the areas with the largest numbers of riders, even if it means reducing services in areas with significant needs.

Amid the warnings and worries, however, there are bright spots. New Orleans’ system’s ridership has increased by roughly 20 percent every year since Katrina and while ridership remains a fraction of its pre-Katrina levels, the gradual rebound indicates the city is in line with national trends that have public transit ridership levels at their highest levels since the development of the interstate highway system.

The report concludes with several recommendations for the RTA including a suggestion that the agency follow the lead of cities like Houston and Portland and create a master plan for transit that could guide the system’s forward route.

“What needs to happen is a regional planning process that look closely at long-term financial sustainability and at service,” said Heiligman. “We need to provide more equitable outcomes and we need to be able to pay for them.”