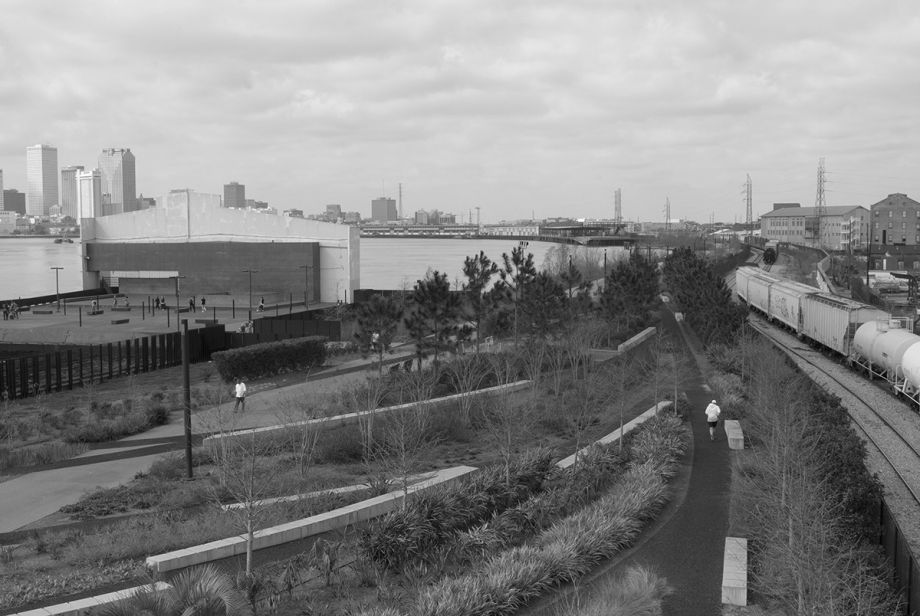 (All photos by Virginia Hanusik)

The city of New Orleans is at the center of a number of precarious tensions: Its commitment to history and preservation is offset by an eagerness to bring in fresh investment. On the other side of the unique value it places on joy and celebration is a murder rate that tops the charts. Perhaps most striking of these contradictions is a geographic one: New Orleans’ strategic position at the crux of the Mississippi River and Lake Pontchartrain is what made it such an attractive place to settle a city. But that also happens to situate it in a bowl — a depression of slowly subsiding land, slipping below sea level. It has been called both impossible and inevitable.

To commemorate the city’s upcoming tricentennial in 2018, photographer Virginia Hanusik is documenting this last paradox in a series of photos titled “Impossible City.” New Orleans is not known for its subtlety, but the project is shot in black and white, giving it a somber feel that offers a welcome respite from the flashy, colorful images that so often represent the Crescent City.

“Images of New Orleans are always so bright and loud and in your face,” Hanusik says. “I’m more interested in placing small details or clues within the frame that hint at the broader theme in culture and geography.”

Hanusik’s subtle composition reflects the discrete nature of her content, too. So often, she says, the very systems that are literally keeping the city afloat are structures we never see. Hanusik is referring to the levees, canals and pump houses, and locks throughout New Orleans, many of which become subjects in her work.

“If you ever see images of it, it’s because something went wrong,” she says.

While water infrastructure might not make for the most glamorous photos, it is what keeps the city in existence.

Hanusik’s previous work chronicles the effect of land loss on Louisiana’s coastal communities. She says this collection is more about New Orleans in particular — how a distinct sense of place is perpetuated through the relationship between the urban environment and its surroundings.

“They’re snapshots that demonstrate a moment in time: climate change, sea level rise but also being able to preserve a local history,” she says.

An artist with a background in architecture and urban planning, Hanusik says her project is not just an effort to commemorate the unique style of New Orleans buildings. Nor is it intended to only document alluring abandoned homes whose dramatic aesthetic have been captured before. Hanusik’s photos are more of a catalog, creating a holistic survey of the building stock.

“I’m interested in what’s being renovated and restored,” she says, “and what’s not.” Hanusik hopes her images will inspire discussion about why, and why not.

As a result, many of the photos have a quotidian feel; they’re not the ornate French Quarter or Garden District mansions, and they’re not the abandoned homes covered in cat’s claw vines. In her day job, Hanusik works at a social innovation accelerator and many of the startups she works with are focused on water management. That’s how she became interested in urban water issues.

Hanusik is not the only one thinking about water. Just last month New Orleans City Council voted to invest in an update to the storm management system. The public-private Greater New Orleans Water Plan, launched in 2011, envisions a Dutch-inspired design that would help the city live with water instead of constantly working against it. When flood maps were redrawn last year, many neighborhoods were designated low-risk that previously had been required to buy costly insurance. Whether or not the risk is actually lower in those places, or the city’s repeated appeals to change the map were attempts to lower high insurance costs they believed would discourage development, is another question. These and more are the types of debates Hanusik hopes her images evoke.

Hanusik says any images of opulence are attempts to position these structures in the crosshair of a volatile natural environment.

“I don’t want to use the word absurd,” Hanusik says, laughing. “But it’s almost absurd to think about the grandiosity of these houses … in the increasingly vulnerable environment that they live in.”

Hailing from New York’s Hudson Valley, Hanusik says she’s always been interested in topography as a means of perspective. She points to the “rusty rainbow,” a giant, arched stairway that leads up and over the railroad tracks in the Bywater neighborhood to the city’s $30 million Crescent Park, running along the previously unused Mississippi River waterfront. Hanusik says she appreciates the rare opportunity to get a view for more than just its aesthetic.

“I think the change of perspective,” she says, “is really useful in being able to have a sense of identity in the city.”