Photos Tell a Story of Disappearing Coastal Land – Next City 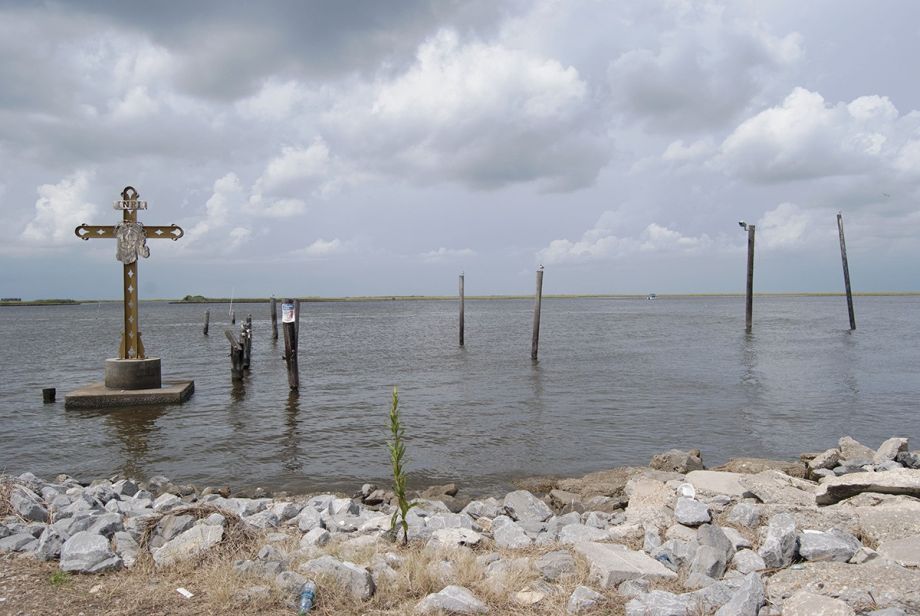 Every hour, a plot of land the size of a football field subsides into the sea in Southeast Louisiana. Over the past 80 years — thanks to the channeling of the Mississippi River, which used to deposit sediment on the shoreline, thanks to drilling for oil and gas, and now rising seas — about 2,000 square miles of the state’s coastal landscape have disappeared.

If that boggles the mind, it’s probably also hard to picture. How does a society adapt to the erosion not only of its land mass but also of its traditional means of controlling the environment, its livelihood, its culture? Photographer Virginia Hanusik has been roaming the fingery coastal wetlands of Southeast Louisiana, documenting the impact of rising seas and disappearing wetlands on the small towns there. With an eye for both beauty and irony, she trains her lens on the human interventions in the landscape: the ditches and channels, the cracked fields of concrete, the ubiquitous churches, the houses raised up on stilts.

“I’m looking at signs in the landscape, being interested in infrastructure and roads and signage, and seeing the history of those communities through the eyes of the built environment,” says Hanusik. Human influence is largely to blame for the coast’s destruction, and strategies that could slow it are still being debated. In the meantime, Southeast Louisiana residents have to decide whether to hunker down or to pack up and leave. Hanusik visualizes that tension, capturing both abandoned strip malls, and brand-new subdivisions.

Hanusik works for an accelerator program that incubates for-profit and nonprofit entities involved in coastal restoration and stormwater management. “Through my work I’m able to understand the high-level issues of land loss and sea level rise and environmental injustice that my photographs have helped me to understand on a smaller scale,” she says.

She wants her audience to see this issue from the ground as well. “This is an issue that is only going to become more immediate as more communities around the world are going to start experiencing climate change and rising sea levels and land lock,” she says. “We’re experiencing it here at a really rapid pace, so I think capturing this moment and being able to see the complexities in terms of structural resilience on the ground, that’s kind of my focus.”

“These communities and these parishes have been hit so many times with storms and hurricanes, [but] people still live here. There are commercial environments; people are buying and selling land. But there’s a high level of uncertainty,” says Hanusik. “[I’m] thinking about the future — if you were to buy land here, what that would mean and how safe you would be, if there’s any sort of guarantee that your home or your property would be protected.”

Despite that uncertainty, Hanusik says many of the communities she visits still have a sense of hope and defiance, and a sense of humor. The signs that recur in Hanusik’s photographs often convey the same belief: “It’s not just going to sink into the sea.”

But many are choosing to leave the area, especially after the 2010 BP oil spill severely handicapped the fishing industry. “There’s a lot of conflict in terms of the different narratives of homeownership and residency along this area,” says Hanusik. “So you have people that are stark deniers that anything bad is going to happen to them, and then you have people who were strongly affected and lost their entire home and livelihood from BP and past hurricanes.”

Earlier this summer, residents of nearby Isle de Jean Charles became the first recipients of a federal grant to relocate an entire community due to rising seas. Throughout Southeastern Louisiana, those who remain can take their chances, pay for flood insurance, or raise their homes up on stilts.

“I’m always trying when I go out to depict the hard infrastructure — the road, the speed limit sign — with the natural environment,” says Hanusik. The above photograph was taken on Tidewater Road, the only road to Venice, Louisiana, where the Mississippi River meets the Gulf of Mexico. Water surrounds the street on either side. The cypress trees in the distance are dead because of saltwater intrusion. “This is wetlands that used to be much more robust and lush than it is now,” says Hanusik.

Hanusik is also interested in the flood management techniques that have served Louisiana so poorly in the past. She’s been following New Orleans’ urban water plan, with its goals of resilience and improved stormwater management. In this picture, “what I’m really looking at is the amount of concrete that’s poured, and thinking about how that’s created flooding in the past,” says Hanusik. “That’s a symbol of not a very sustainable way of living in that environment.”