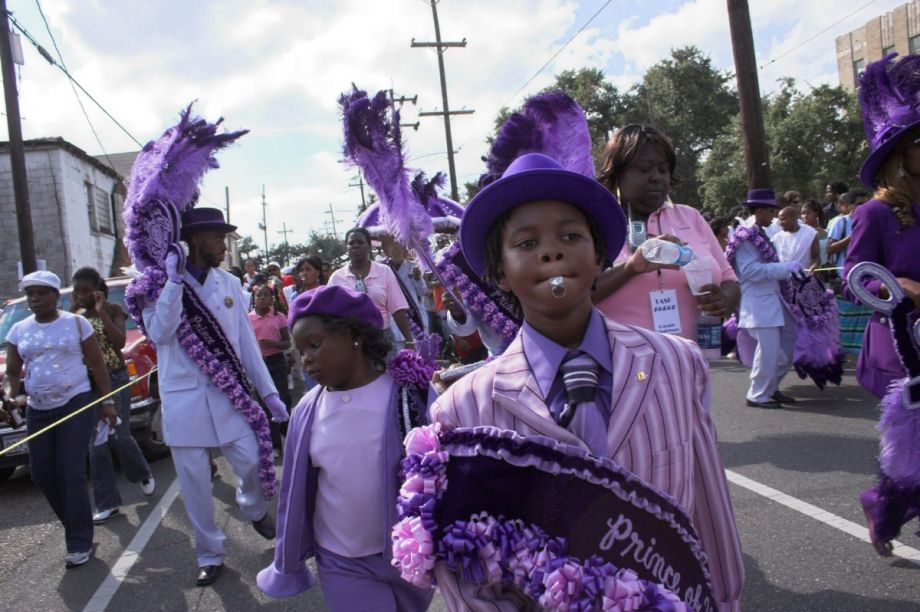 The Prince of Wales Social Aid and Pleasure Club parading through New Orleans Central City neighborhood in the fall of 2007. Photo by Derek Bridges via Flickr

Finding the second line is like a scavenger hunt. Maybe you have a route sheet, listing each of the stops the parade will make, in order. But you don’t know how quickly the parade is moving, and you have to fill in the gaps. You know it’s passed by already if you stumble upon the graveyard of plastic cups and paper carnations littering the New Orleans streets.

You know you’re ahead of the procession if you find the pick-up trucks. Parked strategically at the intersection closest to a parade’s scheduled stop, informal vendors line the tops of their truck cabs with various liquor and beer options. And through the megaphone, as the blue lights of the police escort enter into view, one vendor will start his echoing, signature advertisement: “Got That Cold, Cold Heineken! Cold Cold Heineken!” You’re in the right place.

There will be plenty of parading over the next week in New Orleans as Carnival season marches forward and the Mardi Gras spirit envelops the city.

But second lines are different from the grand parades that take over St. Charles Avenue and other major thoroughfares each Fat Tuesday. Traditional Mardi Gras Krewes emerged out of 19th-century secret societies, white business organizations and other exclusive subsects of elite, high society. (In 1992, the New Orleans city council wrote an antidiscrimination ordinance banning racial exclusion by the Krewes). The Social Aid and Pleasure clubs, (SA&Ps), though, operate on a more lateral level. Designed in the mid-19th century to aid their dues-paying members with taxes, insurance costs and funeral expenses when times were tough, the SA&P clubs further served to bolster a sense of community. While few of them continue to provide financial assistance to their members, they still function as a gathering space and source of collective identity. 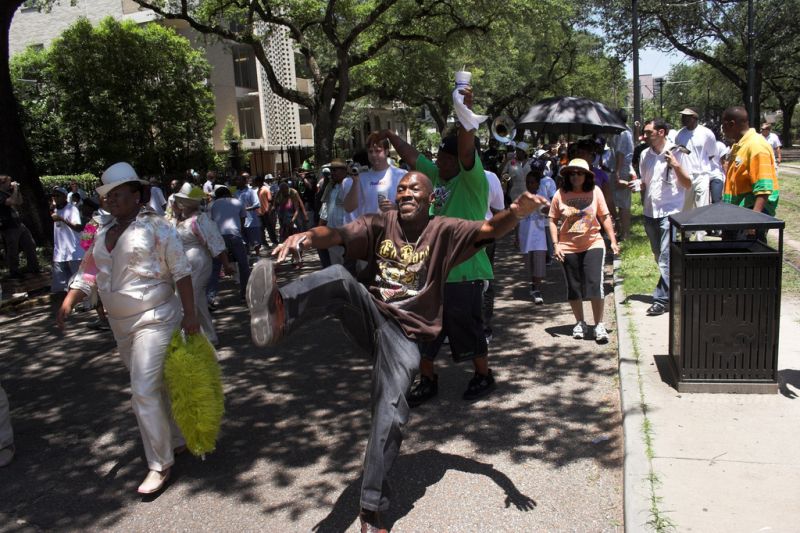 Each Sunday between Labor Day and Father’s Day, a different Social Aid and Pleasure club hosts a neighborhood parade in New Orleans. Club members dress to the nines — pressed, matching suits with ascots and vests and ribbons on their caps in accenting, matching colors. They carry shields covered in paper carnations and pump their umbrellas in the air. They parade between two ropes, designed to create a distinct dance floor: a mobile VIP room, of sorts. Some members — including the club-elected king and queen — ride floats and drink champagne. Behind them, a brass band, or several, follow. And then there’s everybody else, dancing alongside the parade. Sweating on each other in the muggy heat, buying beers from coolers pulled on wagons, running into old friends. Streets are suddenly dance floors, open to all.

Scholars have argued that second lines act as essentially anti-capitalist gatherings, by virtue of their direct challenge to a conventional understanding of property and ownership. Parade stops range from a favorite bar for club members, to someone’s auntie’s house. People show off moves on rooftops and climb onto billboards. The space belongs to the collective; there is no hierarchical structure or operator to be held accountable.

In their 2006 article in American Anthropologist, anthropologists Rachel Breunlin, who teaches at the University of New Orleans, and Helen Regis, a professor at Louisiana State University, support this notion. They write about place and displacement in New Orleans’ Ninth Ward, “in Western Capitalist societies, property may be public, but it is rarely imagined as collective.” During a second line though, they say, property – public and private alike — is opened to all. It is subsumed by the community.

Among neighbors and club members, the parades offer a distinct source of spatial identity, Regis and Breunlin say. In the course of their research, they interviewed one member of the Nine Times social aid and pleasure club in the city’s Desire neighborhood who defined the geographic scope of his neighborhood specifically by the boundaries of the Nine Times Sunday parade route. “Nine Times not only produces a parade,” write Breunlin and Regis, “but also effectively produces a new experience of and representation of neighborhood — Nine Times. It also claims a collective ownership of a landscape that is considered marginal land.” 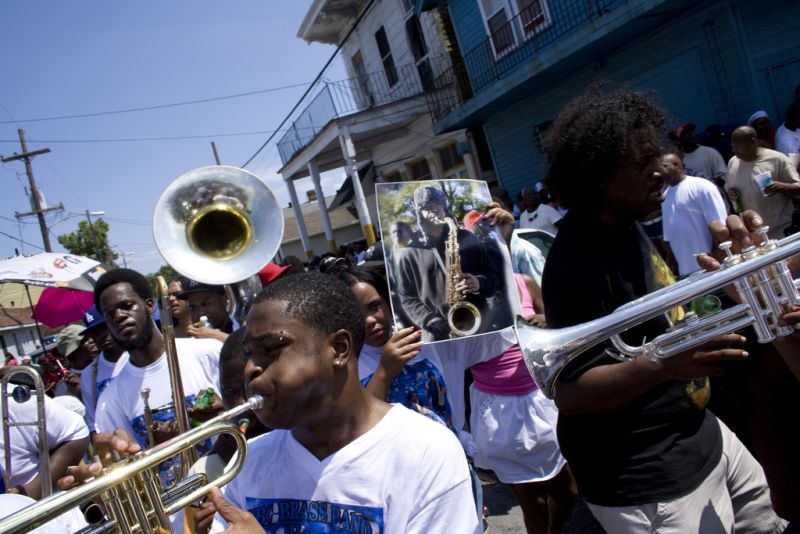 To Be Continued Brass Band providing the soundtrack for the Perfect Gentlemen Social Aid and Pleasure Club Second Line. photo by Derek Bridges via Flickr

Second line parades have a long history of reflecting and even defining community. The scope of that community, however, is changing. The parades date back over 120 years. They are a lasting tradition — many social aid and pleasure clubs have maintained the same Sunday parade route for decades. But, like many structural and cultural institutions in New Orleans, the practice of second lining went through an unprecedentedly drastic transformation after of Hurricane Katrina.

Before the storm, second line parades operated on a neighborhood level. Norman Dixon Jr. is the president of the Young Men Olympians Social Aid and Pleasure Club. He also works for a foundation that organizes and funds SA&P clubs citywide.

“Second lines was looked at just as a community thing,” he says. ”New Orleans, as multicultural as it is, as gumbo pot as it is, people do a lot of things within their communities over here.” That changed, along with the city’s demographics, after Katrina.

“I think when people started moving into the community that had never stayed there, they start telling their friends ‘hey, come on in, this isn’t just a thing for people who are in it, it’s for whoever wants to join in.’”

Deb Cotton is one of the new New Orleanians who nudged the change along.

Originally from Los Angeles, Cotton moved to New Orleans five months before Katrina hit. After the storm, she evacuated to California. Homesick for New Orleans and fearing that the city really might not come back, Cotton found herself perusing the Internet for any fragment of home.

“Tours of architecturally significant homes, parades, brass bands. I started looking for second lines and there were only about five videos on YouTube. They were really bad, grainy, and I just got to thinking a second line is an exhilarating experience and there’s no footage. And no other city is going to allow us to restart that tradition.”

“It has a lot to do with race,” Cotton, who is African-American, says. “The society page (in the paper) made no mention of black events, black-hosted events. You’d think that New Orleans is majority white city.”

She moved back to New Orleans and began blogging for NOLA.com, the online arm of the local paper, the New Orleans Times-Picayune.

Cotton began publishing the weekly parade routes. She attended the parades and took video footage while she was there. And she watched as her posts drew traffic on the website. Gradually, the crowd started to grow and to look different. White people, black people, East Bank, West Bank, natives and newcomers were together taking over the streets.

Dixon watched this transformation occur for locals and tourists alike.

“It’s more open now. I think people will go wherever now. I think that’s the trend that started after the hurricane. Downtown uptown, it was like get in where you fit in.”

Dixon, who began parading with YMO when he was seven years old, began to attend more of the parades too.

“I’ll tell you, I was born and raised here, and I never went to the Ninth Ward until after I graduated college. And it was for a second line.”

It may seem like publicizing the parades could lead to a cultural appropriation that would threaten the tradition of the second lines. Cotton says she gets dozens of calls from tourists each week, asking her for the parade route. The sea of dancers behind the band is undoubtedly whiter than it ever was before the storm.

But both Dixon and Cotton say the publicity and increased diversity have worked to strengthen the institution of the second line. Cotton says that the SA&P clubs — and the black leadership that heads them — are finally getting some of the recognition they deserve from the media.

“The local news began to see, oh this is as much part of the tourist experience as a horse-drawn carriage in the quarter or anything else.” The parade’s increased visibility also helps give organizers leverage in negotiations with the city over permits and other restrictions.