I Was Shot in New Orleans, But I’m Not Angry at My Shooter – Next City

I Was Shot in New Orleans, But I’m Not Angry at My Shooter 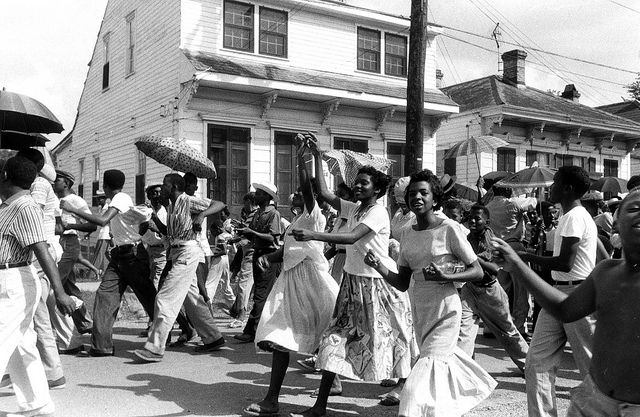 Mother’s Day 2013 brought one tragedy and two miracles out of New Orleans. Here is the tragic: Young men with guns shot me and 18 other people at a parade. The miracles: Among the 19 shot, no one died from their wounds, not even me. The bullet landed in my stomach, shredding through internal organs before lodging in a delicate patch of tissue surgeons have nicknamed the “soul hole” because getting hit there can easily take a life. My surgeons told me the fact that I survived is a feat of nature.

No one ever expects to get shot, but I especially never expected it the way that it happened. Sunday, May 12 was just like every other Sunday I spend in New Orleans, filming the city’s weekly second line parades. For the uninitiated, second line parades are an only-in-New-Orleans phenomena. The tradition spans back more than a century to a time when blacks were not allowed, by virtue of their race, to purchase life and health insurance policies.

Instead, black communities around the city banded together to form neighborhood-based “social aide and pleasure clubs” that would use dues money and other fundraised cash to offset funeral and major health care costs for their members. To promote the club, members would each year put on daylong parades for their neighborhoods, complete with brass bands, costumes, royalty and fanfare reminiscent of Mardi Gras, albeit on a smaller scale. The “second line” of neighborhood people would follow the band and club members’ lead as they danced across the city. (Blacks at the time were not permitted to join Mardi Gras Krewes, so this also presented a rare opportunity for blacks to march in the streets.) The parades remain today a predominately black affair, although more and more people from outside the community have begun to participate in the ritual and, certainly, to document it.

I work as a journalist and have focused on filming and writing about second line parades, brass bands and Mardi Gras Indian culture — all indigenous black New Orleans traditions — for the past five years. That Sunday, the parade was just getting started as I was walked with the band, gathering footage to post later on my YouTube channel.

The parade, with its sharply dressed band and dancers followed by a “second line” of revelers, had been going for about 30 minutes when two young men began firing indiscriminately into the crowd. A man selling icy beers from a picnic cooler on the back of a red wagon ducked. Everyone began to run in panic. The men were shooting to hit a single target, regardless of everyone else who was in the way. I fell in the street, hit in the side but feeling the burn of the bullet deep in my stomach. The appearance of the ambulance was both immediate and interminable.

Six weeks and 11 surgeries later, I was released from the hospital. Every day is a struggle. I am in constant pain. I’ve lost a significant amount of weight. The things I used to love I can no longer enjoy. One thing, however, is not a battle: I feel no anger or vindictiveness toward those who shot me. Instead, I feel sad. As I move on with my life, the young men who perpetrated this crime are facing the rest of their lives behind bars. They are in early 20s and have already lost their chance at a full, free adulthood.

This is a worn-out theme in my tattered city. People are tired of hearing about it, but seemingly have no answers. Yet as a black woman, I don’t believe there are no answers. I believe there can be resolution to the deadly phenomenon if enough people were truly committed to ending it.

This is a political problem as well as a social one. What I mean is that the violence could be assuaged in this city if the communities most ravaged by poverty got the resources needed to address the systemic failures playing out in gunfights and drug economies. Some say that resources do go to education and job training programs in low-income neighborhoods, and question how much money is enough. Well, my bullet-damaged gut instinct is that not as much as one might think goes toward the programs we all want to see. So much money here is squandered on graft, inefficiencies and incompetence in government — money often meant to help at-risk communities with the very things needed to offset the desperation that fuels violence.

Governments are only as effective as the communities that watch them. People scream for an end to violence, but shrug and take another bite of their po’ boy sandwich when they hear that $6 million was squandered on a development that never got off the ground, or on some program that was supposed to address crime but never resulted in one conviction. If the people voting leaders into power do not demand accountability, who will?

I guess it wasn’t altogether true when I said that I was not angry. I am outraged — not at the young men who shot me, but at the system that fostered their violence. Most of the young men who commit violence in our city are born in circumstances that never give them a chance to be anything other than desperate. And people are liable to do anything during desperate circumstances, up to and including lashing out with gunfire at a parade of people just to hit a perceived threat. We are no more human to them than they are to us. And until we see that they are a product of our indifference and begin to hold elected leaders accountable for their circumstances, we will continue to see their indifference directed toward us.

The most frustrating part is that we have what it takes to fix this problem. We have the resources. We always have. What we lack is willpower.

New Orleans is a relatively small city, with a population of about 361,000. It’s totally feasible to drill down to the number of young black men that are either at risk of falling into a life of crime or are already there. City records count 17,925 black men between 15 and 25. Of this group, about one third are at risk, with criminal records, teetering on the line toward the criminal life. That’s a little more than 6,000. That’s a manageable number to plot out an assessment and case management program for them.

We need to talk to them, find out what they want to see for their lives. What would make them want to give up a life of crime? Develop a case management program for those that are salvageable. Come up with an assessment program to weed out those that are too hardened, too violent to live among us, and track them toward incarceration. We know what programs are needed to help make these men whole — job training and creation, life skills building, education, mentoring. We must insist these types of programs reach the target audience and that the money spent to support them is used effectively. Our resources, and their lives, must not be squandered.