New Philly Hotel Gets Both Economic Development and Design Wrong 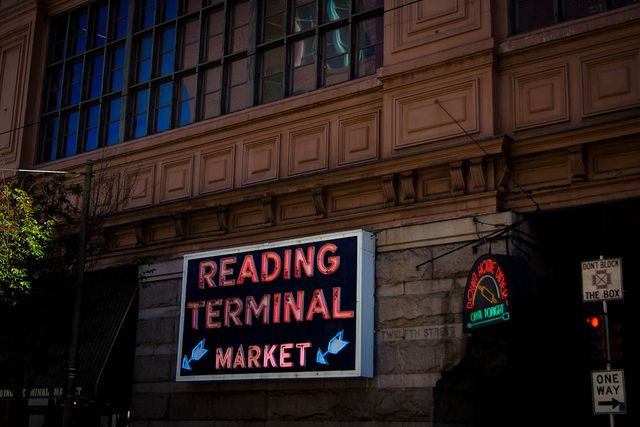 Reading Terminal Market, on the other hand, gets them right. Credit: Ellie LoNardo on Flickr

Home2Suites opened across the street from the Pennsylvania Convention Center in Center City a week ago. The 246-room hotel, which looks like it was airlifted off the side of a freeway in Nebraska, was the recipient of some rather nice public subsidies.

Philadelphia Inquirer architecture critic Inga Saffron did not mince her words in a review this weekend, calling the hotel’s façade “so flat and plasticky it makes Parkway Corp.’s adjacent brick-and-concrete garage look like a work of heft and dignity.” (Don’t worry, she keeps twisting the knife on the “sickly yellow, synthetic-covered mid-rise” throughout the rest of her piece.)

But look past Saffron’s distaste for the tacky building, and you’ll see a bigger issue: All those public subsidies.

The total project cost $60 million, according to this statement from Home2Suites by Hilton. The total bill for taxpayers in cash grants: $14 million. Add another $10 million in New Market Tax Credits, $2.75 million in Redevelopment Assistance Capital Program funding, and an Infrastructure and Facilities Improvement Program grant from Pennsylvania. Throw in $5 million in HUD 108 loans from the Philadelphia Industrial Development Corporation (PIDC) and $3 million more in EnergyWorks financing from the PIDC and The Reinvestment Fund.

That’s a lot of acronyms to swallow, but the bottom line is this: It’s a boatload of financing for a private company, even one that promises to create 146 permanent jobs.

Spurring economic growth and creating jobs is a good thing, but all that cash for what is essentially the Walmart of hotels doesn’t seem terribly fair to the rest of Center City. Where is that money for small local businesses? Or even, say, a boutique hotel like the Ace? Something that won’t deface the fabric of the city’s architecture.

Saffron says she doesn’t have any beef with the subsidies, but rather with public investment in lousy design. “Just because you’re subsidizing economic development doesn’t mean you should be subsidizing poor design,” she writes.

Except that statement is a false dichotomy. If anything, subsidies should go toward fair economic development and good design. Look at Reading Terminal Market, which Sarah Goodyear called the “gateway to the city’s convention center,” where more than 100 vendors serve Philadelphians seven days a week. The city managed to redevelop a treasured, historic city building and didn’t drop an abysmal yellow hotel in what is otherwise a rather nice-looking part of town.

The market celebrated its 120th anniversary in February 2012 and has seen a serious uptick in customers, from 4.8 million in 2003 to 6.3 million in 2011. It’s been a slow revitalization, dating back to the 1980s. Chairman of Reading Terminal Market Corp’s building committee Eugene Lefevre told the Inquirer in 2011 “We run it to break even and to preserve it as an asset to the city.” The group doesn’t get any state or city subsidies for its annual operating budget.

But the PIDC, which did not return two phone calls for comment, and a host of other partners have helped support the ongoing revitalization of the market. Some could argue that Reading Market Terminal Corp. is tax-exempt and denying the city a larger tax base. But it seems to me that it has meshed economic development and design in a manner that won’t offend aesthetes, promotes civic pride and facilitates a massive, centrally located market for both small and large local businesses. Someone get these folks some more taxpayer money.