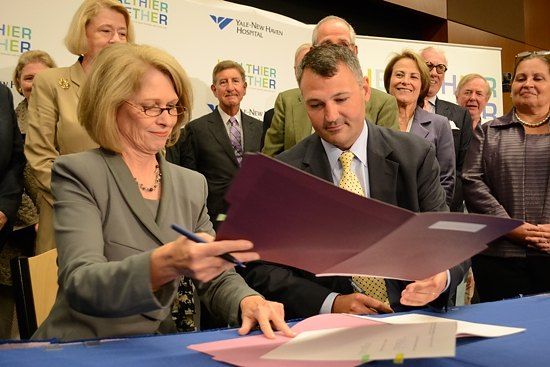 A beloved Catholic hospital ended a 105-year run, and one of the nation’s largest hospitals was born, as officials signed papers Tuesday afternoon to have Yale-New Haven Hospital take over the Hospital of Saint Raphael.

Two St. Raphael’s nurses called the occasion “bittersweet” as they posed for one last time with the sign outside their hospital. At around 9 a.m. Wednesday, the sign will bear the Chapel Street facility’s new name, “Yale-New Haven Hospital, Saint Raphael Campus.”

Workers and patients interviewed Tuesday professed a range of feelings about the changes. Some mourned a loss of identity at St. Raphael’s, while others looked forward to a greater sense of stability at an institution in deep structural debt.

Officials touted the takeover as the way to save financially drowning St. Raphael’s, cut costs overall, and strengthen a top employer in the New Haven economy’s growing health-care sector.

About 200 workers at St. Raphael’s are losing their jobs as the result of the takeover, officials said. YNHH Vice President Vin Petrini said the hospital is working hard to find new positions for those people. And YNHH is keeping on 3,400 workers from St. Ray’s.

“We fully expect to grow jobs in the long run as we invest in the Saint Raphael campus and open up inpatient beds,” Petrini added.

At the press event in a hospital auditorium, YNHH CEO Marna Borgstrom said the takeover has three goals: to improve the quality, accessibility and affordability of health care. The move will save YNHH from spending $650 million on a new patient tower to accommodate an influx of patients. Patient volume has been so high at times that the emergency department has hit capacity, causing the hospital to divert patients to St. Raphael’s.

Borgstrom said the acquisition will enable the hospitals to coordinate care through common electronic records. It will allow for cost-cutting amid declining government reimbursements, “ensuring our vibrancy into the future,” she said.

“We must change, we must evolve, and we must be nimble,” Borgstrom said.

St. Raphael’s CEO Christopher O’Connor said the acquisition is “the best and most effective way” to rescue his hospital from “imminent financial difficulties.” Joining a hospital just six blocks away will “drive effective and efficient use of medical resources,” he pledged.

The new institution will be the fourth largest in the nation, based on the number of beds, according to figures provided by Becker’s Hospital Review. Petrini said the number of beds tends to fluctuate, however, so the hospital is sticking with “one of the largest in the nation.” St. Raphael’s and Yale-New Haven will operate as one hospital under one provider number, he said. The two campuses are counted as one hospital—just like New York Presbyterian, which is considered the largest hospital in the U.S. with 2,200 beds at two campuses, Petrini said.