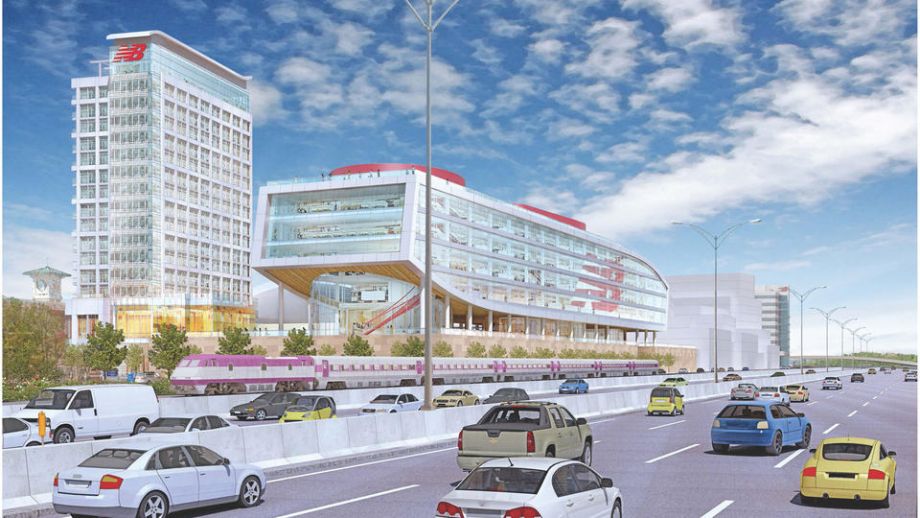 As states and cities find it increasingly difficult to pay for transit, and as the feds continue to devolve transportation to lower levels of government, many areas are turning to the private sector for help in building the infrastructure necessary for train and bus service.

So it went in the Boston neighborhood of Brighton, where shoe manufacturer New Balance is paying about $15 million to build a new commuter rail station, called “Boston Landing,” on the MBTA’s Framingham/Worcester line.

Boston has, through its near-omnipotent planning organ, the Boston Redevelopment Authority, given New Balance permission to build a massive, $500 million headquarters in exchange for the station money. The new complex will come complete with 900,000 square feet of office space, 175 hotel rooms, a 345,000-square-foot sports facility, 65,000 square feet of retail space, and the requisite 1,750 parking spaces. (BRA is moving in a more progressive direction on parking, but hasn’t quite made it there yet).

In many ways, the New Balance site was the perfect case for a public-private partnership. The investment required was relatively cheap — $15 million on top of a total $500 million development cost is only 3 percent, a pittance. Furthermore, the development is large enough that the company can cover the cost by itself, without involving other parties in more complex value capture schemes and districts.

But once you start talking about either larger infrastructure projects or smaller real estate projects — we wouldn’t want to allow only large developers, who can shoulder the full cost of infrastructure upgrades, to build — it becomes tougher to use private money for public works.

A bit farther away from the city, the Green Line’s nearly $1 billion, seven-stop light rail extension is underway. This project has per-station costs at least 10 times that of an infill commuter rail station, which would be impossible to cover with any single development, and tough to pay for even with multiple projects. (And good luck convincing each neighborhood along the line to accept 5 million square feet of new development).

New Balance won’t get station naming rights, although this could have netted a bit more money. In Philadelphia, for example, AT&T paid $5 million for a five-year deal to have the southern terminus of the Broad Street subway line, formerly known as Pattison, renamed “AT&T Station.” That deal brought in $3 million for SEPTA, the local transit authority. Cash like that would be a sizable chunk for a small station like Boston Landing, although it’s not clear that the less-popular Boston station would be worth that kind of amount.

There’s also the risk, as Boston Globe columnist Shirley Leung notes, that private backers will demand to make decisions that might not be in passengers’ best interests.

One example of her fear — not realized with Boston Landing — is the conflict over the M-1 light rail/streetcar line on Woodward Avenue in Detroit. Transit advocates wanted the line to run in the road’s median, with dedicated lanes, to allow faster speeds. Private backers wanted it to run along the curb, ostensibly to drum up more business around stops. They eventually came to an agreement whereby it runs along the curb in the heart of downtown, below Adams Street, while running in the middle of the street to the north. It’s a compromise, but one that might make the service slightly less useful for riders, especially if traffic picks up in downtown Detroit.

In any case, the M-1 is a rare example of a project where private interests were willing to pony up the majority of the necessary funds. For the most part, the relatively small numbers involved in the Boston Landing commuter rail stations will likely be the rule.