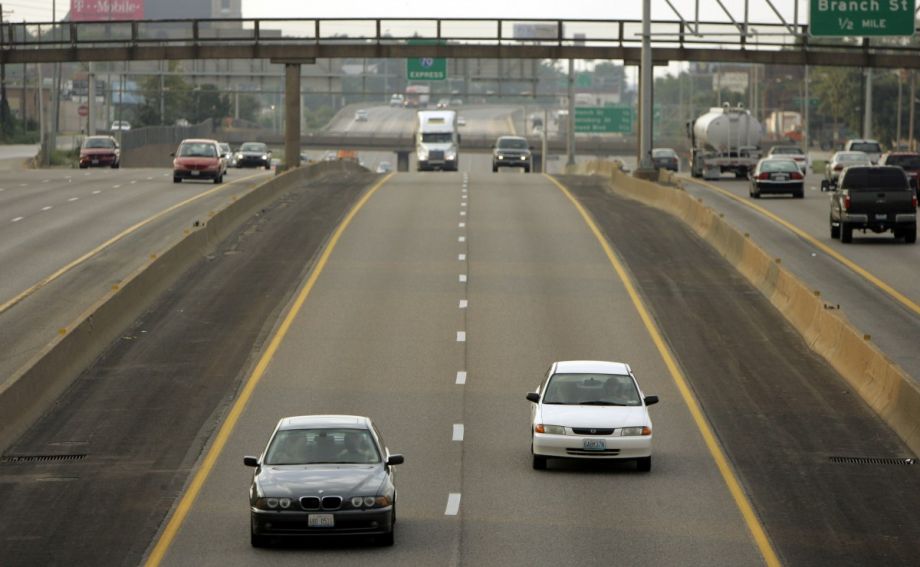 Missouri has the nation’s seventh-largest highway network, and I-70 (above) links its biggest cities. (AP Photo/Jeff Roberson)

Need to see what’s wrong with U.S. efforts to fix a broken transportation funding system? There are Missourians who would be glad to show you — they’re the opponents of Proposition 7, an amendment to the state constitution that would add three-quarters of a cent to the state sales tax for the next 10 years for the purpose of financing transportation projects statewide. Those in favor of the increase insist an investment in highway upkeep is critical, while Missourians who plan to vote “No on 7” say the trucking industry — not low-income and working-class families in St. Louis and Kansas City — should pick up that tab.

If Prop 7 passes, the state’s gasoline tax — at 17.3 cents per gallon, it’s the seventh lowest in the nation — would not be able to be raised for the 10-year period, nor could funds raised by the sales tax be diverted to other purposes. Originally slated to appear on the state’s general election ballot in November, it was moved up to the August 5th primary election last month, leaving opponents scrambling to organize against a well-funded pro-amendment campaign.

The question has also scrambled traditional political alliances across the state. Both management (the Missouri Chamber of Commerce and Industry) and labor (the state AFL-CIO) have joined arms to pass the measure, while the state’s Democratic governor, Jay Nixon, has blasted it, especially in the light of huge cuts in the state income tax approved by the Republican-controlled legislature. A number of traditionally Republican groups, including the conservative Show-Me Institute think tank and the Missouri Alliance for Freedom, find themselves in uneasy agreement with the Governor on Prop 7 as well.

St. Louis Alderman Christine Ingrassia summed up her fellow Democrats’ argument thusly: “The Missouri General Assembly passed $776 million in tax breaks in May for the wealthy, and now they are asking low-income and working-class families and seniors to shoulder the burden of an increase in taxes for transportation improvements.”

Just about everyone agrees that the state faces a transportation funding crisis. Prop 7’s backers point out that the state has the nation’s seventh-largest highway network but ranks only 40th in spending per mile on highways. And as Missouri is one of the states whose gas tax is restricted to road spending by the state constitution, mass transit must rely on a hodgepodge of funding sources, primarily local sales taxes approved by voters in the service territories of the state’s two largest transit systems, Metro Transit in St. Louis and the Kansas City Area Transportation Authority.

The Missouri Department of Transportation (MoDOT) has tried some alternative approaches to raise money for road projects in the past, most notably turning Interstate 70, a key transcontinental highway that also links the state’s two big cities, into a toll road. Missouri was one of three states given permission to toll an Interstate by the federal government under a pilot program, but the effort to toll I-70 collapsed in 2012 in the face of opposition to tolling by a number of groups representing road users, most notably the state’s trucking industry.

And it’s that industry, Ingrassia argues, that stands to gain the most by offloading road financing onto others. “Trucking lobbyists have a lot of clout in Jefferson City,” the state capital, she said. “They were definitely at the table during the state legislative session” that approved the sales tax amendment.

Missourians for Better Transportation Solutions, the alliance leading the “No on 7” campaign, cites a freight study that showed that 55 percent of the trucks on Missouri highways neither begin nor end their journeys in the state as fuel for their opposition. “Trucking companies get a free ride with Amendment 7,” Ingrassia said, adding that the heaviest trucks cause the bulk of the damage to the state’s roads.

Perhaps the one argument in favor of the amendment is that it would commit MoDOT to funding mass transit projects in the state for the first time. But that commitment is not statewide, but rather driven by local wish lists: Funding for a proposed downtown streetcar line is on MoDOT’s draft list of funding priorities for the St. Louis region, but expanding Kansas City’s soon-to-open downtown streetcar is not on its region’s funding priorities list at all, for instance. Neither St. Louis Metro nor the KCATA are anywhere to be found among potential beneficiaries of the sales tax, 90 percent of whose proceeds will go to road and bridge repairs under the terms of the amendment.

This puts Missouri’s urban population at a disadvantage, Ingrassia said. “Despite having many freeway lanes and relatively low traffic congestion, St. Louis’ public transportation system is as fractured as the regional political landscape.”

The bi-state St. Louis Metro system receives funding from separate sales taxes in St. Louis City and St. Louis County and state support from Illinois. “Illinois provides a ton of state support for MetroLink on the east side of the river,” said St. Louis Alderman Scott Ogilvie, but Missouri provides none. As a result, Metro runs a large number of low-ridership bus routes in suburban St. Louis County because it provides the lion’s share of local funding, while services in more transit-oriented St. Louis City get underfunded and MetroLink light rail expansions that might promote development in the city languish. “City and county leadership do not agree on the next light rail expansion,” said Ogilvie. “Without money from the state of Missouri — in essence, jurisdictionally neutral money — there’s no current clear path forward on where to make the next big investment.”

The situation is even more fragmented on the other end of the state, where what was once a unified bi-state mass transit system has been split among four different agencies — two operated by the core metro counties on the Kansas side of the Kansas City area, one by the City of Independence, and KCATA itself. The City of Kansas City, not KCATA, is developing the nascent streetcar network there, and activist Clay Chastain continues to promote his vision of a metropolitan rail transit system with a tax proposal that will compete with both Prop 7 and a city-sponsored move to expand the streetcar taxing district on the August ballot.

All of this, Ingrassia argued, makes it difficult to promote sustainable growth in St. Louis — and by extension, in Kansas City as well. Missourians for Better Transportation Solutions points out that St. Louis and Kansas City share the distinction of having more highway lane miles per capita than any other American city, and that road congestion in both cities is low and falling. “If a great highway system and low rates of congestion were the linchpins of economic growth, as tax proponents claim, our state should be exploding with economic growth,” the group argues. Yet Missouri has the same slow-growth pattern found in other older industrial states.

For Ingrassia, the best ways to fund road repairs in the state are the old ones. “An increase in gas taxes would be a fair way to pay for roads,” she said. “Another area worth exploring would be tolling,” including high-occupancy toll lanes on the state’s urban freeways. She’s not alone in thinking this way, but many others oppose both — which is how Missouri got to this pass in the first place.