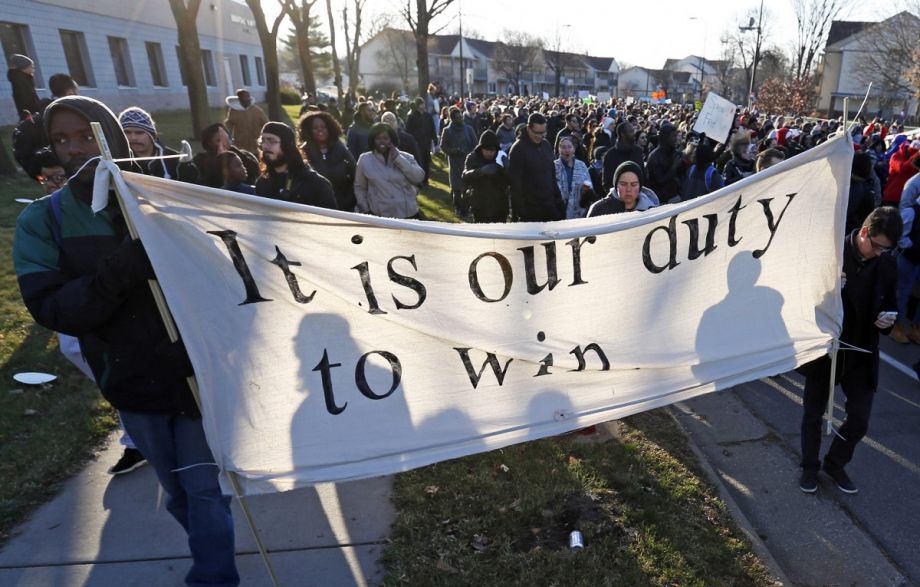 Black Lives Matter protesters and supporters march in Minneapolis on Nov. 24, 2015, after the fatal shooting of Jamar Clark by a police officer. (AP Photo/Jim Mone)

In 2016, the state of Minnesota came upon a small fortune, thanks to a 2013 increase in property taxes on the wealthiest 2 percent of the population. Governor Mark Dayton, honoring his word that he’d give the money — a surplus of $900 million — back to the people, offered up new tax credits for working-class families and broadband expansion into rural areas.

He also did something that suggests the influence of today’s heated zeitgeist on minorities and equity in the U.S. For the 2016-2017 budget, he earmarked $6 million for an emerging entrepreneur fund focused on minority business owners, $8 million to youth employment programs, $4.1 million to help job searchers with barriers to employment, and another $16.9 million to grants and funds meant to erode the disparities faced by Minnesota’s communities of color, for a total of $35 million.

The funds will be broken up among local organizations who’ve carved their mission statements around achieving racial equity, and in Minnesota that’s a herculean task. The state’s largest urban area, Minneapolis-St. Paul, is considered the worst place in the United States to be black and looking for employment, according to information from the U.S. Census, the U.S. Bureau of Labor Statistics and the U.S. Commission on Civil Rights. The unemployment rate for blacks is three times that of whites, and throughout Minnesota minority families have nearly half the income of their white counterparts and 30 percent of black families live beneath the poverty line.

“It is hugely disheartening,” NAACP leader Jeffry Martin told the Twin Cities Pioneer Press. “You almost feel like a snake oil salesman when you tell young people to keep trying.”

The $35 million total isn’t much, but considering the problems at stake, it’s an amount that Anthony Newby, executive director of Neighborhoods Organizing for Change (NOC), is grateful for.

The police shooting of 24-year-old Jamar Clark on November 15, 2015, in Minneapolis left Newby and his staff deeply unsettled. Clark was a friend, and a blossoming community advocate. A few weeks before he was shot in the head while the knee of a cop pressed his chest into the ground, he came into the office and asked how he could volunteer his time to the nonprofit.

“He was killed less than a mile away from us, so it was very personal,” says Newby.

His death led to an 18-day occupation of the Minneapolis Police Department’s fourth precinct building by NOC and an array of groups, from the city’s dense Somali-American community, to Black Lives Matter organizers, to more legacy organizations like the African American Leadership Forum. Brought together over the same crisis, they realized their efforts were more potent when they worked as a unit.

From this realization came the United Black Legislative Agenda, a list of 11 policy recommendations NOC and five peer organizations debuted in front of state legislators in April 2016. At two pages total, it’s not as weighty as the recently released Movement for Black Lives platforms, but the groups will be meeting again in October to fill out each of the plan’s points and ready it for legislative session in January.

If there’s an opportune time to ask for internal changes at the state level, the agenda’s authors realized, the budget surplus and national anger over race disparities have made that time now.

The agenda points to economic inequality as the taproot of Minnesota’s racial divide. It starts off with the proposal for a capital access fund for supporting black businesses in the Twin Cities.

Newby and his peers asked for $75 million to fill that fund — a far cry from the governor’s $6 million offer. He says more is needed because black business owners are struggling in Minnesota’s largest urban area (and throughout the country) to get the money they need to grow beyond the mom-and-pop store.

“There are creative folks that are making dresses, designing clothing, doing lawn care, but they just don’t have access to capital to get them to the next level of investment so they can hire one or more people,” he says. Minority-owned businesses are more likely to be denied loans than white-owned businesses, and the loans they do get often come with higher interest and lower principals compared to their white peers, according to the Minority Business Development Agency.

When the United Black Legislative Agenda’s six founders meet up again in October, they want to onboard groups outside the civil rights realm to help shape points like this into elaborate, standalone policies. One of those groups is the Northside Economic Opportunity Network, a coalition of business and financial experts who give advice to budding low- and moderate-income entrepreneurs, and are familiar enough with the Minneapolis area to narrate its challenges to legislators.

“They’re doing some good, innovative work to give out small loans to startup businesses,” says Newby. “We think that can be expanded,” now that the governor has already shown interest in investing in that area.

Another pillar of the agenda is youth job creation. While Minneapolis appropriated 12.6 percent more funds to community and economic development programs from 2015 to 2016, Newby and his peers argue that more needs to be done. Black youth between the ages of 16 and 19 face unemployment rates that are twice that of white youth, according to the agenda, and Newby says one area the city can improve on is resources for summer job programs.

“What we know is that those programs aren’t translating into long-term jobs or career paths, particularly for black youth,” he says. “So how do we prioritize those folks to really become part of the workforce in a holistic way?”

According to Newby, the $8 million that the Minnesota legislature put toward this realm, along with the rest of the $35 million total, are seen as a “down payment” by the agenda’s authors. Dayton initially promised $100 million, and the six groups plan on keeping him to his word.

Newby remembers when the governor got in touch with him shortly after they occupied the police building. “He called NOC and Black Lives Matter into his office and said, ‘What can I do, this has to stop,’” he says. Ever since, he’s been receptive to their suggestions, and that receptiveness, Newby believes, was way more influential to the $35 million show of support than the surplus.

“What we know is we were likely to get zero last session in 2016, for any sort of black-related issues, period,” he says. Civil rights groups were disorganized, the Minnesota House and Senate are split between Republican and Democratic control, and opposition from Republican leaders was likely to clip the wings of any race-related budget adjustments. But coming together for the United Black Legislative Agenda changed that.

“It was only through this effort that we got this $35 million on this table,” says Newby. “It shifted the narrative from a black community that is highly fractured, to one that is operating in a sort of alignment with a shared set of values and demands. That’s a new political mass that the legislature has to align with going forward.”