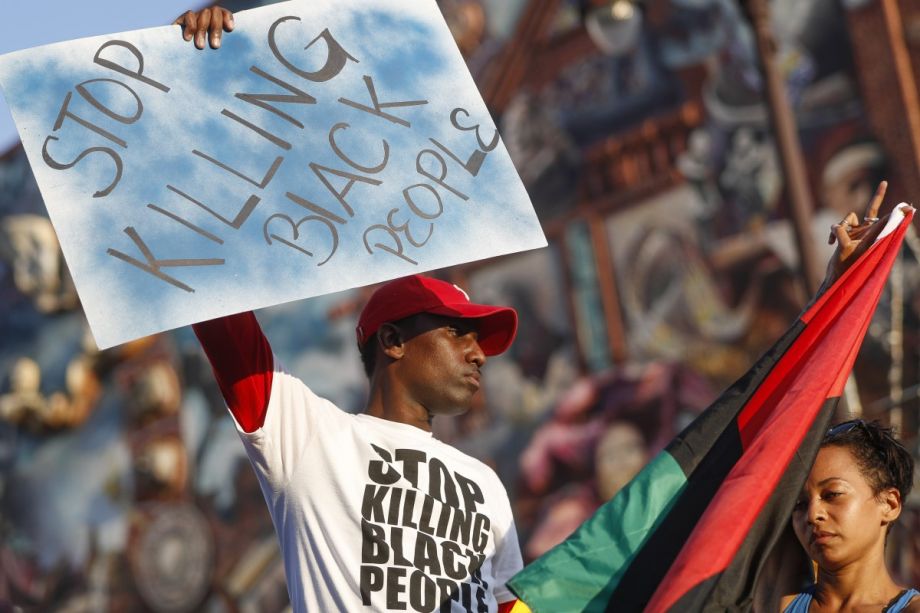 Black Lives Matter protestors march south on Broad Street during a protest in Philadelphia during the second day of the Democratic National Convention. (AP Photo/John Minchillo)

Whenever Patrick Mason passes south through the city of Detroit and crosses over the Detroit River, he feels like he’s stepping onto another planet. Windsor, Ontario, is less than 2 miles away from Michigan’s largest urban center, but he says no two cities in the world are further apart.

Both cities have a historical dependence on automobile manufacturing, and both scrambled to remedy the employment impacts when that industry shifted its focus out of North America. But as Detroit borrowed billions of dollars from banks to cover its laundry list of debts, Windsor survived last decade’s economic downturn in part by diversifying into other industries, maintaining some of the highest tax rates in Ontario and reinvesting those benefits into the city so that it’d keep residents and attract new businesses. (It’s worth noting that Detroit has nearly three times the population of Windsor.)

To Mason, that private-over-public approach isn’t just a Detroit problem — it’s an American problem. And it’s something that’s been simmering discontent among black communities for far longer than reactive headlines on police killings and protests would suggest.

On Monday, Aug. 1, NESRI and dozens of other organizations, working beneath the Movement for Black Lives (MFBL), debuted a six-piece platform that outlines what the United States should do to address the well-documented disparities faced by black communities in health, employment, education, criminal justice and housing. Despite the coalition’s name, its agenda is built with tenets that have long been extolled by economists and think tanks as tools for more inclusive cities.

The platform holds just as much promise for Detroit, which is seen as the pinnacle of black disempowerment by MFBL groups, as it does for New York, Chicago, San Francisco and all other U.S. urban areas where disinvestment in low-income neighborhoods has kept residents pinned to the bottom tier of the economy.

“When you go down and look at the policy platforms here, a broad range of people are going to benefit — African-Americans, Latinos, lower- to lower-middle-income whites,” says Mason. “If there’s a bias, it’s a bias towards people who’ve been locked out of economic growth and the political process.”

When it comes to jobs, MFBL suggests that the state and federal halls of power put $2 trillion to $4 trillion toward government jobs programs aimed at reaching out to groups who’ve been kept at a distance from gainful employment: previously incarcerated, disabled, queer, working-class, cash poor and other marginalized members of the black community.

Mason and Larry Mishel, president of the Economic Policy Institute, both say those programs could focus on infrastructure — a field with an abundance of job opportunities that’s only going to expand in coming years. New hires will be needed to repair bridges and buildings, to wire fiber-optic networks throughout areas with low internet penetration, and for urban renewal works in cities throughout the country.

Current data underscore that forecast. Nationwide, the United States will need to invest $3.6 trillion to repair current infrastructure by 2020, according to the American Society of Civil Engineers. In Detroit alone, an estimated $8 billion worth of investments is heading to the city behind a new light rail and the Canadian-financed Gordie Howe International Bridge between Detroit and Windsor, which will create an estimated 25,000 jobs.

Now it’s just a matter of making sure the black population in Detroit gets the training necessary to qualify for those projects and connect to other bridge-related opportunities. The city is dotted with vocational training programs, and groups like Opportunity Detroit provide a channel between job seekers and local employers, but making sure low-income and unemployed communities are some of the first to get access to new opportunities as they pop up will “have a dramatic effect on raising the quality of life for everyone,” according to Mason.

At the ground level, some cities will indeed benefit most if they start off by aiming efforts suggested in MFBL’s platform at black communities, says Richard Wallace of the Workers Center for Racial Justice (WCFRJ). To him, his hometown of Chicago is a prime example why.

The south and west sides swarm with gang violence year after year, but those areas are also where 50 public schools were closed in 2013, many high-rise public housing complexes were torn down in the last decade, and hundreds of factories struggle to fill thousands of job openings each year, despite being in an urban core where approximately half of all black men ages 20 to 24 are unemployed.

Reducing Chicago’s unemployment numbers, as a result, means focusing on Chicago’s black unemployment issue, as black people make up the bulk of those who are out of jobs.

“We’ll see people looking for jobs and they don’t even know the building next to them is a factory that’s hiring,” says Wallace. With MFBL’s proposals in mind, Chicago’s black youth could get a leg up on access to these jobs if the city or state of Illinois gave tax incentives to businesses that hired a benchmark number of black employees.

That type of nuance — pairing unemployed populations and economic incentive in a way that’s mutually beneficial to both job seekers and industry — is why Mishel called these platforms “really important.”

Mishel says he thinks it’s unlikely that cities will push out policies that filter out everyone else except for the black community, so what’s laid out in the initial agenda “will benefit the black community but it’ll also benefit some small cities and rural areas that are also white.”

The other top component of MFBL’s economic justice platform with big implications for cities is its focus on tax revisions. It pushes for higher capital tax rates and lower labor tax rates, higher corporate taxes, taxing “bads” instead of “goods” (i.e. taxing corporate pollution instead of grocery store items), and removing the income cap for social security payroll taxes. If these suggestions became policy, urban areas in particular would see an end to corporate tax breaks in business zones, and property taxes that better align with property owners’ income levels.

MFBL also backs the Ban the Box movement, an effort to get employers to remove questions about criminal history on job applications, which has already been enacted by more than 100 U.S. cities. And for part of its position on reparations, the movement asks for a universal basic income — an idea that’s attracted considerable attention and debate throughout North America and Europe — provided to all black individuals to prevent the risks of dropping into total poverty.

The ideas and positions laid out in MFBL’s policy briefs aren’t revolutionary, but their implications for cities like Detroit and Chicago would put low-income communities in those cities on a path out of poverty. To Mason, that’s where this movement and its agenda really begins.

“Now we have a platform that offers an enormous bed of solutions that moves beyond just saying we’re angry,” he says. “We’re not just angry — here are some really good policy ideas that deal with a broad range of problems.”