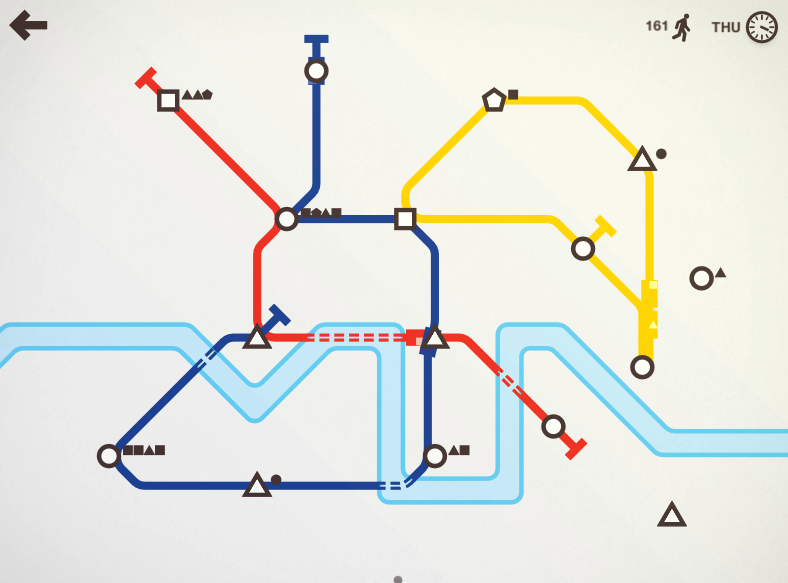 Riding transit can be a contradictory experience: You might rush and push and scramble to catch a train, and then once on board, sink into a book or headphones for a quiet ride. So it’s fitting that Mini Metro, a subway-building game recently launched for mobile devices, is similarly a “strange blend of zen and manic,” as one of the designers described the game to The Verge.

In Mini Metro, subway stations appear on a blank map, and players drag lines between them to keep up with demand. Players can’t control where stations appear, only reroute tracks to serve them better and add new trains or carriages as the game allows. The action builds slowly, as stations pop up and passengers begin to appear at them, board the little gliding trains, and disembark at stations further down the line. Most of the game is spent watching and gently tweaking — that’s the zen part — but when passengers pile up, the hectic nature of the game takes over. The game is lost when a station gets too crowded.

The minimalist game offers 13 different maps, representing cities from Cairo to New York to a fictional Auckland system, each with unique features. Cairo’s trains hold fewer passengers than Osaka’s high-speed bullet trains, for example. “Making each city feel unique while still fitting inside the Mini Metro gameplay framework is a challenge,” designer Peter Curry of game developer Dinosaur Polo Club told The Verge. “We research into the city and the metro network and try to find something that makes it stand out.”

The free version utilizes generic maps. The full version has the maps based on real-world cities and includes an “infinite-play zen mode” that allows unlimited subway building, without the threat of losing when a station overcrowds. The new mobile app game might make players a little more understanding about the manic nature of their own commutes.

“One thing that we do hear often is that by playing Mini Metro people have gained an appreciation for the difficulties that their own city’s metro planners have, and they don’t mind the odd delay to their commute as much as they used to,” says Curry. “It’s a pretty good feeling to have added a little empathy to the world.”