Milwaukee Organizers Getting Creative to Reach Voters – Next City 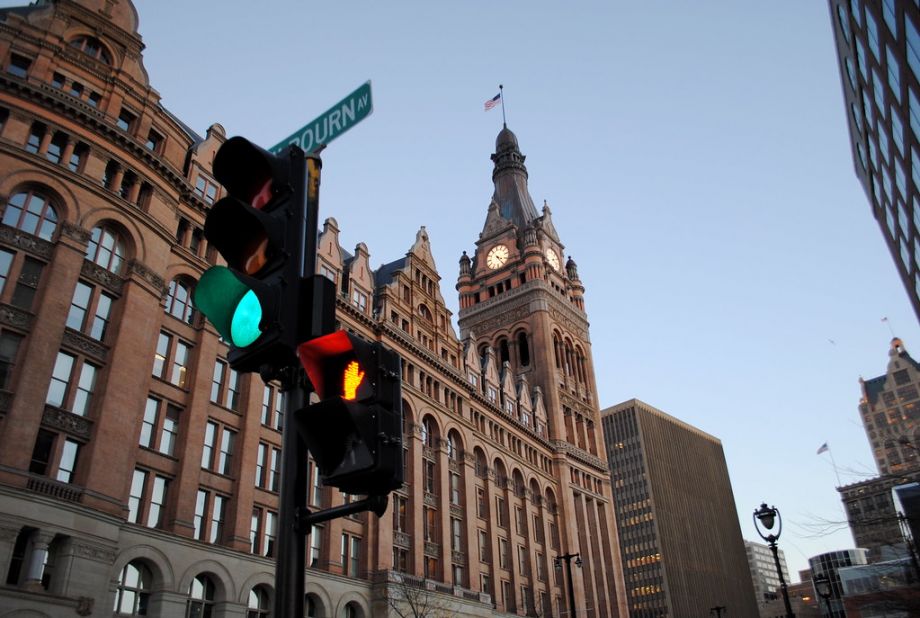 In April, city leaders declared racism a public health crisis in Milwaukee. The largest city in Wisconsin is also the most segregated city in the United States, according to a recent Brookings Institute analysis of 2013-2017 census data. The census also reports Milwaukee’s poverty rate at 27.4 percent, making it one of the poorest cities in the country. Nowhere else are Blacks are more likely to be unemployed than whites. And the 53206 zip code on Milwaukee’s North Side has the highest incarceration rate in the state, 62 percent. This, in the state with the highest incarceration rate of African-Americans.

These are all reasons three Milwaukee groups are adopting innovative approaches to engage residents. Activists aim to help residents get involved in civic life, including, but not limited to, voting. The idea is to connect with residents around the issues that matter to them and to give them the information they need to mobilize for change. One organization brings candidates along on “silent canvasses” to listen to what residents are thinking. The same group shares contact information for public officials when community members have a problem that needs solving. Another organization connects with public transit riders — and uses the system’s lackluster performance as a hook to discuss elections.

“I used to be that person who thought ain’t nothing going to change, but then as I got older … I knew that something had to be done and we definitely needed that change,” says Maletha Jones, lead ambassador for Black Leaders Organizing for Communities (BLOC), a grassroots action group in Milwaukee. Jones began her career in activism in 2012 when progressives across the state mobilized to recall Governor Scott Walker. That experience, she says, “gave me an opportunity to talk with people who were suffering from the same things I was suffering from like low-paying jobs, lack of funding for our education, [needing] better healthcare.” BLOC brought Jones on in early 2018 to head up the organization’s ongoing canvassing efforts, efforts that aim to engage people around the issues that matter to them year-round and not just when elections are looming.

BLOC has 19 ambassadors working primarily on Milwaukee’s North Side, according to executive director Angela Lang. “We are building up relational organizing on a neighborhood level,” Lang says. That means BLOC helps residents identify who to call when a street sign has been knocked down, for example, or when a building has been abandoned. For Lang, the group offers critical support to “make sure people’s voices are heard in the city budget.”

One of the approaches BLOC has adopted to ensure people’s voices are heard is to have candidates for office participate silently in a canvass. The canvasser introduces the candidate by their first name only, without mentioning they are running for office. The candidate isn’t allowed to take photos, and the campaign team has to stand back while BLOC’s canvasser makes the connection. The idea is that rather than selling themselves, the candidates should be listening to what their constituents think and need. If the resident recognizes the candidate, Lang says the canvasser explains that they are only along to listen and suggests making contact for a dialogue at another time.

BLOC was also part of a coalition last year that helped elect the replacement for County Sheriff David Clarke, a darling of the right and nearly a member of the Trump administration’s Department of Homeland Security. According to the Milwaukee Journal Sentinel, at least four people, including a newborn, died in jail during Clarke’s last term. Clarke left office in 2017, but organizing by BLOC and others led to the election of Earnell Lucas, a Milwaukee native and former police captain, over Clarke’s acting successor and former deputy.

Alex Vitale, a sociologist at Brooklyn College, told The Cut in 2016 that Milwaukee’s physical and social segregation are “entrenched.”

This isolation and impotence is exactly what BLOC and other Milwaukee organizations are working to break down. While BLOC’s year-round canvassing efforts aim to encourage people to become more active in their communities, other organizations are focused directly on educating and mobilizing voters. Voces de la Frontera Action, a 501(c)4 organization and Citizen Action Wisconsin, in conjunction with the non-partisan Milwaukee Transit Riders Union, have adopted innovative strategies to engage voters. These efforts come as a result of years of fighting for equitable policies and against disenfranchisement.

The 2016 election saw the lowest voter turnout in Wisconsin in 20 years. Voter participation in the 2016 presidential election fell by as much as 30 percent in some of Milwaukee’s lowest-income neighborhoods. 2016 was the first election when the state’s strict voter ID law was implemented, and Neil Albrecht of the city’s Election Commission told The Chicago Tribune that low-income communities, where many people had difficulty meeting the new voter ID requirements, also showed large drops in voter turnout.

A lack of stable housing affects a substantial number of people in Milwaukee’s lower-income neighborhoods. That can make it difficult for organizations to connect with people and to establish an ongoing relationship. These challenges combined with resident frustration around the city’s public transit system led Citizen Action and the Transit Riders’ Union to develop a transit-based outreach system.

“We would try to channel frustration with bus system into voter engagement,” says Nick De Marsh, a Transit Riders’ Union member who conducted outreach at bus stops and on buses prior to the 2012 and 2014 elections.

There are many good reasons why Milwaukee transit riders are fed up. In the aughts, Milwaukee cut its bus system by 20 percent. Once elected, Governor Scott Walker rejected $810 million in federal funding for a rapid rail connection between Madison and Milwaukee. In 2014, groups in Milwaukee sued over a highway expansion they argued only benefited the suburbs. The result was a settlement that paid for the creation of two “Job Lines” bus routes, routes now imperilled because the settlement funds have run out. And while Wisconsin has awarded Taiwanese firm Foxconn more than $4 billion in subsidies, it hasn’t made provisions for how to bring manufacturing-trained workers from the north side of Milwaukee to the plant slated for Racine County, just south of the metropolis.

The issue goes beyond Foxconn, however. Milwaukee lacks a regional transit system so people can move from the city to the suburbs where jobs are located. Meanwhile, only 44 percent of black men in Milwaukee are employed. The Center for Economic Development at the University of Wisconsin Milwaukee reported in 2015 that the city lost nearly 28,000 jobs between 1994 and 2009. Its neighboring counties — Washington, Ozaukee, and Waukesha (called the WOW counties) — however, added more than 56,000 jobs. The same report noted that 91 percent of the region’s African-American population lives in Milwaukee and only three percent in all of the “WOW” counties.

De Marsh says that after the state enacted a stricter voter ID law, outreach teams focused primarily on talking with bus riders about the upcoming elections and asking them to pledge that they would vote. “It seemed like we were significantly more effective given that we were a small team of just four people reaching a much larger number of voters than people who were just going door-to-door to speak with voters,” De Marsh says. He recalls that the team would collect between 40 and 60 pledge cards per day. The local transit workers’ union support facilitated canvassers’ work by allowing them to approach other riders on the buses themselves.

Citizen Action Wisconsin says that instead of actually riding the buses, it now primarily sends canvassers to bus stops at strategic locations since they can connect with a large number of people without moving.

While Citizen Action Wisconsin and the Transit Riders’ Union have taken to the streets to reach voters, Voces de la Frontera Action (VDLFA) asks its members to turn to their social networks. The group has adopted an app called the Relational Voting Program to help members identify friends, colleagues and family members who are registered to vote, but who usually stay home instead of going to the polls.

Christine Neumann-Ortiz, the Executive Director of VDLFA, says that the organization created a role called a “vocero.” This has a double meaning since “vocero” is both a member of Voces as well as a spokesperson or messenger. Neumann-Ortiz sees this “messenger” work as critical to the Latino community since often, she says, “people are often very disconnected.” Using existing social networks, she says, makes it easier to share important information about elections and issues such as whether there are opportunities to hear candidates speak, and what the ballot will look like.

In the last election, Neumann-Ortiz says, the organization connected with a number of Puerto Ricans who were displaced by Hurricane Maria, as well as the Mexican-American community.

“You create a list of people you’re going to talk to,” says Neumann-Ortiz, describing how the organization’s members created lists of Latino voters. 410 people participated as voceros last year and compiled a list of more than 5000 people. “Take that list, match the list with the voter file, and then you are able to prioritize,” Neumann-Ortiz says. VDLFA’s approach, she says, has been to target voters who are less likely to vote on their own initiative. If a vocero speaks with someone about voting early, they can follow up to confirm whether the person actually cast a ballot. Neumann-Ortiz says that mapping out the list of people each vocero will speak with allows the group to “to measure your scale and be able to have greater collective accountability.”

While VDLFA has used the approach to mobilize voters, like BLOC, Neumann-Ortiz says many people feel disenchanted about electoral politics. As a result, she says VDLFA is engaging with people from these lists for grassroots action. “We’ve coordinated with people around stopping anti-sanctuary bills in the past. Now we’re working for driver’s licenses,” she says. Moving forward, Neumann-Ortiz says, VDLFA aims to build its base by connecting with Latinos, pro-immigrant rural voters, and multi-racial youth.

Acknowledging that often people feel disengaged and used in relation to electoral politics, Neumann-Ortiz sees the RVP app as a way to transcend that transactional relationship.

“The power of this is that it starts with people you know. But the technology creates a nice way to see where we’re at in terms of relationships, scale and collective accountability around how are we doing, and that’s what makes it powerful,” Neumann-Ortiz says.