Blight-Fighters Present a Unified Front in Memphis – Next City 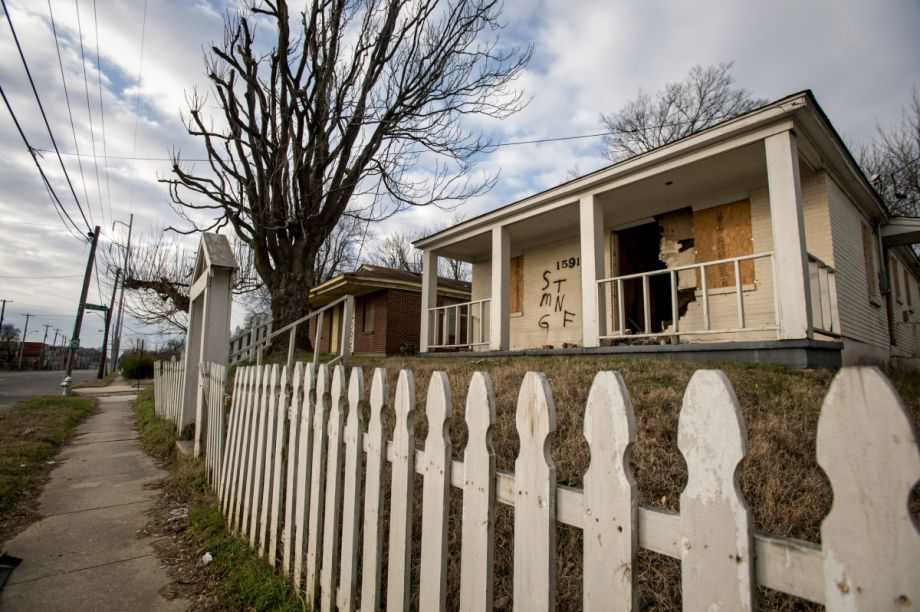 Dozens of organizations across the city and Shelby County have dozens of blight elimination efforts. The city government, for example, makes a daily chore of identifying and mitigating blight. On the business side, the Greater Memphis Chamber wants to help rid the city of blight and litter with its Memphis Clean by 2019 program. The Mid-South Peace and Justice Center, a grassroots social justice non-profit organization, works on blight issues to fight for low-income residents.

In Memphis neighborhoods, residents talk blight on the Nextdoor social media network and organize clean-up efforts. A citywide Mow-To-Own program allows residents to invest sweat equity to eventually own some blighted properties. The Blight Authority of Memphis Inc. is a newly minted, nonprofit land bank working to get federal funds and tear down blighted structures. Since 2012, Neighborhood Preservation Inc. (NPI), a private nonprofit organization, has served as a sort of hub for blight efforts citywide.

Again, there’s no shortage of blight-fighters in Memphis. But so far most of those strong, good-hearted legions have battled blight on their own and in their own spheres of responsibility, their neighborhoods or business districts. By their own admission, these organizations do not coordinate or collaborate as effectively as they should, not because they don’t get along, mind you.

In most cases, these agencies just have never taken sufficient time to develop a coordinated strategy that acknowledges they are all working — in some way or another — on the same problem. For many years, there has been a need for all involved in this work to clarify their roles and to regularly meet to discuss and jointly develop ideas and projects.

That’s what Kermit Lind saw in the Cleveland area 10 years ago. Blight efforts there were — in a word — fragmented, said Lind, an urban development specialist and professor emeritus at Cleveland State University. Like in Memphis, many groups were working to remove blight in different ways but they didn’t really work together. That changed when he helped organize a “coalition of the willing,” as he called it. Over the past 10 years, that group has worked together and by doing so has been far more effective at addressing the Cleveland area’s challenge of vacant and abandoned properties. And that group, the Vacant and Abandoned Property Action Council, or “VAPAC,” is still meeting, Lind says proudly.

Lind is now working in Memphis as a project specialist for NPI. He’s joined by another urban development expert, Joseph Schilling, a senior research associate at the Urban Institute. Together, they are helping to organize another “coalition of the willing,” this time here on the east bank of the Mississippi River.

“What is intriguing at the moment for Memphis is that this seems to be a moment in time when a lot of people from a lot of points on the compass — private sector, nonprofits, and especially those from the public interest — are kind of facing the same way and in a mood to say, ‘enough already with the confusion,’” Lind said. “We want to do something that’s a little bit different and has a long-lasting effect.”

Lind, Schilling and NPI leader Steve Barlow have assembled a group of about 25 leaders from all over Memphis and Shelby County. The leaders are largely directors in local government, directors of community development corporations, directors of nonprofit agencies and business owners, along with a few elected officials. For the past few months, these leaders have met to hammer out a strategic plan that will unify blight-fighting efforts in Memphis and outline just how that fight should be fought.

“[Memphis] is a big, small town, and while we’re in our organization silos, people know who people are,” said Brandon Gaitor, the special projects manager at NPI. “We can get everyone in the same room and say that when we open this door again, we’re all going to come out with a solution or some type of answer or some type of consensus.”

The group, now informally called the “blight elimination steering committee,” met in mid-February to begin to prioritize some of the goals it laid out in past meetings. Members worked for four hours on nitty-gritty, granular topics like setting the specific time limits for a vacant building to qualify as an “abandoned building.” But they also looked at broad-scope issues like what to call their final document; “charter” sounded too exclusive, “framework” sounded too unfinished, “blueprint” sounded too finished and “plan” sounded too bland.

Every decision in the process is important. Once complete, the group’s goal is that the document will be the single flag flown over all of Memphis and Shelby County’s blight-fighting efforts. The Chief Operating Officer for the City of Memphis, Doug McGowen, a member of the committee since the project began, told team members last week that his intent is to take the plan to Memphis Mayor Jim Strickland with a recommendation to adopt it. “Make no mistake, whatever you call it, this is the flag that we in city government are going to carry forward.”

“The mayor’s priorities are blight, crime and litter and his charge is that we should be brilliant on the basics,” McGowen said. “[Blight] is as basic as it gets and the comprehensive blight approach that this group is working on right now is what being brilliant is all about.”

The group is slated to complete the final version of the document in the coming weeks. That document will be unveiled to the public and community leaders at the Memphis Blight Elimination Summit on Thursday, March 17 in Memphis.