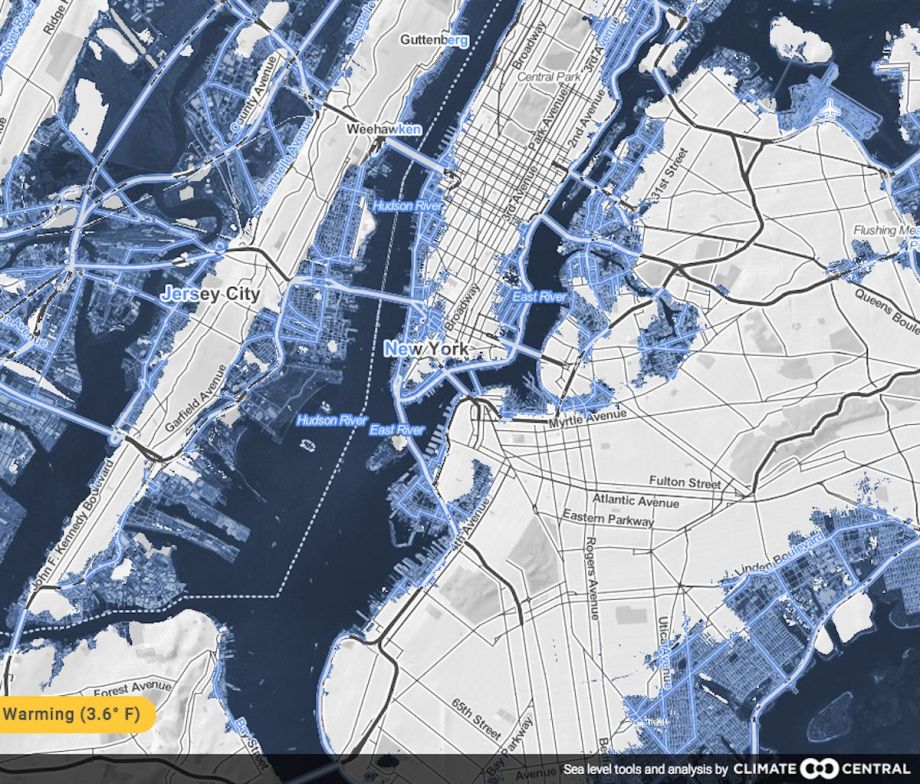 When it comes to climate change, action versus inaction could be the difference between the displacement of “just” 145 million people and upwards of 760 million people from the world’s coastal cities. With the United Nations COP21 global climate summit in Paris just around the corner, the scientists at Climate Central are hoping that stark visuals might spur people — especially those in power — to act. The nonprofit organization of scientists and journalists has released a new report on global sea level rise and an accompanying set of maps that illustrates just how high the water might rise.

Climate Central connected models for how much warming the Earth will see for a given level of carbon emissions and how much sea levels will rise with different levels of warming. That data helped them determine how high sea levels could rise for a given temperature increase.

If humanity continues producing carbon emissions at its current rate, scientists expect a 4 degrees Celsius temperature rise (7.2 degrees Fahrenheit). Climate Central found that translates to a sea level rise of 7-8.9 meters (23-29 feet) over the next several centuries. Thousands of cities around the world would be submerged under that new high tide mark including Shanghai, Kolkata, Jakarta, Tokyo, New York City, Hong Kong, Miami and New Orleans, just to name a few.

At 4 C, most of lower Manhattan is under water, East Harlem is gone and huge chunks of Brooklyn are submerged (along with lots of Jersey City, the Newark airport, etc.). The flooding at 2 C is still frightening, but much less so. As you can see in the map below, Shanghai is complete gone at 4 C.

But, says Scott Kulp, computational scientist and senior developer with Climate Central, “If we make the choice right now — and it really has to be right now — to cut our emissions drastically and make sure the temperature [rise] doesn’t exceed 2 degrees C, we would be saving hundreds of cities from this dark future.”

Some sea level rise is already locked in. Kulp says that the best-case scenario is keeping the temperature rise below 2 C, which would lead to around a 4.7 meter rise in sea level. Though that’s still grim and would affect hundreds of cities still, it reduces the number of people impacted to 280 million. Keeping warming to 1.5 degrees drops that to a 2.9-meter rise in sea level and 137 million people displaced.

“Most people don’t want to imagine a future where their home is under water,” says Kulp. “We’re hoping these maps and visuals help people realize the choices we make today will be the stark difference … between cities where people can still live and work and underwater historical monuments.”

Cities are in a unique position in the climate conversation. As the source of about 70 percent of greenhouse gas emissions worldwide, they are one of the main reasons we are spiraling toward a flooded future. But, they may also be a critical part of the solution.

Harris Corporation, an aerospace technology company and defense contractor, wants to help cities be part of the climate solution. They are piloting a system that measures greenhouse gases autonomously and in real time. They are testing the project on a 25-square-kilometer grid in Paris. It involves two lasers mounted on tall buildings 5 km apart and two reflectors on opposite sides of the grid. As the lasers hit the reflectors, sensors create a tomographical map of the CO2 in the grid. (There will be a live demo at COP21.)

“Part of the problem is cities have to speculate about what’s really happening. Currently, they either use mathematical methods to calculate emissions, or they measure carbon in one specific location. Across the street it might be much different,” explains Eric Webster, Harris’ vice president and director of environmental systems.

Webster says their carbon-mapping tool gives cities the sort of fine-grain data necessary to make strategic decisions about reducing emissions. Instead of having a rough idea of how a traffic congestion project is reducing emissions or how much carbon an urban green space is sequestering, cities can actually measure it in real time.

The Paris pilot will run through mid-December. Webster says after that, Harris engineers will work to scale it up to a 100-square-km grid and look for more city partners interested in implementing the tool.