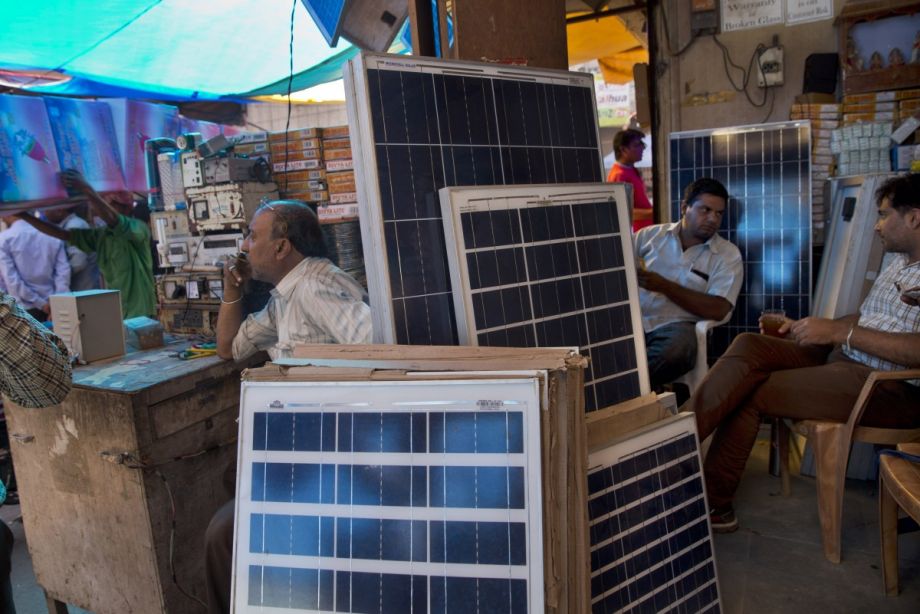 Solar panels are displayed for sale at a market in New Delhi, India. India plans a fivefold boost in renewable energy capacity in the next five years. (AP Photo/Saurabh Das)

Good news, at a time when news about climate change is so rarely good: Mayors and policymakers have the power to significantly reduce the threat of climate change through the infrastructure decisions they make in the next five years.

As a planet, we can only risk emitting 1,000 gigatons (Gt) of CO2 into the atmosphere this century. According to myriad studies, 80 percent of this “carbon budget” is already locked in by past policy decisions and investments in inefficient, high-carbon infrastructure, like coal-fired power plants. The International Energy Agency predicts the world could lock in the rest of that budget, 200 Gt CO2, by 2020.

But a new report by the C40 Cities Climate Leadership Group (C40) and Stockholm Environment Institute (SEI) points to a hopeful path for cities and their leaders.

With 1.5 million people moving into cities and towns every week, the construction and refurbishment of urban infrastructure will account for one-third of the remaining global carbon budget. That means cities can make a crucial choice: Build green infrastructure instead of traditional, and avoid locking in 45 Gt CO2 by 2030, eight times the U.S.’s current annual emissions.

“I do think this is one of the stronger good news messages to come out on this front,” says Seth Schultz, director of research, measurement and planning at C40, “if you have a lot of faith, as I do, in local leaders.”

C40 connects policymakers from 82 cities around the planet committed to addressing climate change and reducing carbon emissions. Global mayors and policymakers come together through C40 to learn from each other about urban environmental issues, like waste management, building efficiency and transportation.

“Mayors are incentivized on providing safety, economic security, growth and a healthy environment for people,” says Schultz. Not all C40 mayors may be direct advocates of the environment, but they’re all advocates of providing these crucial assurances to their cities, he says, and this report suggests that investing in green infrastructure is a way to do that.

Schultz says mayors can also use this report as evidence that local measures can have an impact on a global crisis. Electric buses and stormwater recycling may seem like too little too late, but this report shows these small local changes, if enough cities take them on, have a powerful effect.

“Mayors are increasingly having an appetite to be recognized more broadly and even internationally for the roles that they are playing,” says Schultz. “Mayors are no longer just in charge of their municipality … but they have a huge role to play, and it’s actually their collective role that will make a difference.”

The report is the first to identify not just infrastructure, but urban infrastructure in particular as a major opportunity to decrease emissions. Meaning the onus falls on cities and mayors, but national governments, private industry and individuals all have roles to play in much-needed changes.

Cities the world over could reduce carbon emissions by prioritizing density and connectivity, taking steps like investing in bike infrastructure and public transit to decrease the number of people dependent on private vehicles.

With the support of national governments and private industry, cities can cultivate green energy sources, and become more efficient in how energy is stored, transported and used.

“We’re not saying that cities can reduce all 30 percent [of the carbon budget] but they can have an impact,” says Schulz. “This is good news, because [cities] are doing this stuff. [Cities] are uniquely positioned to make a big impact now, and show the rest of the world that it’s possible. Collaboration is possible, change is possible.”

And the timing couldn’t be better. COP21 negotiations — which, for the first time in over 20 years, will aim to achieve a global agreement to keep global warming below 2°C — kick off in less than two months, but the talks will focus on a post-2020 carbon budget. C40 and SEI’s report suggests that significant changes can be made right now.

“Our leaders are capable of acting, have acted, want to act,” says Schultz. “We might be able to buy ourselves a little time here.”