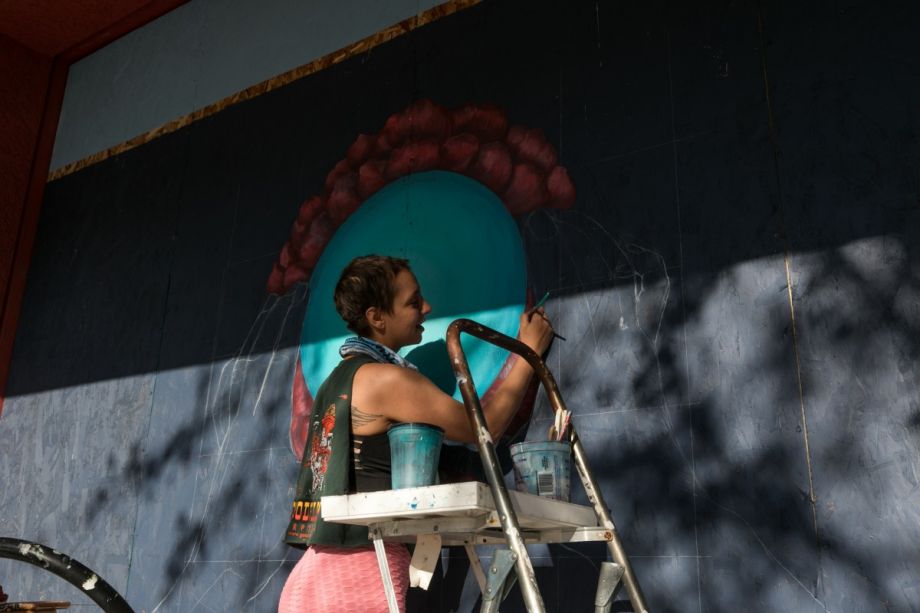 An artist works on a mural to decorate plywood covering a yoga studio in downtown Las Vegas. The Las Vegas Redevelopment Agency will reimburse business owners for boarding up their stores — as long as the boards feature art. (Photo by Mikayla Whitmore)

Boarding up wasn’t an easy decision. But Derek Stonebarger, the owner of ReBar, a downtown Las Vegas pub and antique shop, knew it had to be done. In the days following Nevada governor Steve Sisolak’s mandate that all gaming establishments, restaurants and bars close their doors by noon on March 18th, two neighboring businesses were broken into.

“That’s when I was like, that’s it. I’m boarding up,” Stonebarger said. But something about the plain plywood covering up the once-vibrant space didn’t feel right to him. So he called up Geneva Marquez, a gallery owner and art producer at ReBar, and they formulated a plan. Stonebarger started by hiring an artist to paint the Dude, Jeff Bridges’ iconically zen character in The Big Lebowski, on the plywood boarding up his bar. “The dude abides,” said Stonebarger. “And we were abiding.”

A wave of interest followed as other businesses and artists asked Stonebarger how they could do the same. Within days, the City of Las Vegas Redevelopment Agency (RDA) caught wind of the project and started a program offering up to $2,000 for businesses to board up in the city’s economic development zones — as long as their boards feature some kind of artwork. Other cities have murals going up on boarded-up buildings: Seattle’s project is a grassroots-led effort, while Austin’s is partially supported by the city’s Cultural Arts Division.

The City of Las Vegas RDA, created by the state in 1984, funds development in two disinvested areas through new property tax revenue generated from the investments: One area covers most of downtown, including the Arts District, where ReBar is located. Downtown Las Vegas has seen something of a renaissance in recent years, with its small, mostly independent bars, restaurants and shops offering an artsy alternative to the Strip for locals and tourists alike. That is, at least until the shutdowns began.

As of this week, 34 businesses have received an average of $1,500 each for boarding up, says City Councilmember Olivia Diaz, whose ward encompasses much of downtown Las Vegas. So far, there is no funding cap, and no end date to the program. “Our hope is to support as many businesses as needed,” Diaz said. “But the program is not indefinite, as we will continue to offer it as long as the closure of non-essential businesses remains in place,” she added.

How long that closure is enforced by the state is the subject of a very public debate, launched to national attention after Las Vegas Mayor Carolyn Goodman’s now-notorious statements on national television: On April 22, in an interview with CNN’s Anderson Cooper, she seemingly offered up the citizens of Las Vegas as a “control group” to test whether social distancing measures actually work.

The general response, both at home in Las Vegas and nationwide, was a collective facepalm, earning a parody piece from The Onion and a blistering critique from Jimmy Kimmel. Mayor Goodman has since walked her comments back, releasing a statement in which she advocates reopening “as soon as it is possible while keeping our citizens and visitors as safe as it is possible to do.” Three city councilmembers, including Councilmember Diaz, wrote an Op-Ed in which they countered the mayor’s stance, and announced their solidarity with the governor and the medical and scientific community.

It is true, however, that Las Vegas has been one of the hardest hit cities, economically speaking, in the country. As a tourism-dependent city, Las Vegas has shed hundreds of thousands of jobs in the days and weeks following the shut-down order. Small businesses that applied for Paycheck Protection Program loans were shocked to discover that the funding had run out and largely gone to the biggest players. Stonebarger, who has lived in Las Vegas for 20 years, says he only knows of one small business owner who received a PPP loan.

Governor Sisolak still hasn’t set a date for reopening, saying in a press conference that the reopening “is highly dependent upon expanded testing and tracing capacity in excess of what is currently possible.” With no end date to the shut down in sight, Las Vegas’s small businesses have turned to online sales, delivery — and boarding up their storefronts.

Importantly, funding from the RDA can be earmarked for paying the artists who paint the murals — and, locals say, this is the program’s strength. According to a survey by advocacy group Americans for the Arts, nearly two-thirds of artists and creative workers have become fully unemployed because of COVID-19.

“You know, we’re working artists, we’re losing our studios,” said Marquez, the artist who started the mural project with Stonebarger. “This helped put a little bit of income in our pockets, and everyone was just grateful. It might have paid a bill or got us groceries for the day,” she said. Marquez estimates that her artists have received between $200 to $1000 per mural. She curates a rotating list of artists to ensure that the projects are distributed fairly.

“And of course we practice safety,” Marquez added. “I only have maybe four artists on each day, and I have to separate it: One for one window, skip one, and then another artist.” The artists also tape a six-foot boundary around each painting site to dissuade passersby from getting too close.

As the murals materialize up and down Main Street, the atmosphere has shifted subtly: The plywood is still there, just as the shutdown mandate remains in place. But amidst the gloom, there’s something resembling hope. The painted messages range from abstract playfulness to encouragement. “Tough times don’t last, tough people do,” reads one. “Stay fresh: Wash ya hands,” reads another. Others riff off the slogan that became popular in the aftermath of the October 1 shooting: “Vegas Stronger.”

“I think it’s the first COVID-19 battle born tourist district,” said Stonebarger, referencing Nevada’s official state slogan. “You can safely walk around with a loved one, with your masks, and social distance, and look at these beautiful works of art.” Once the shutdown order is rescinded and the boards are removed, Stonebarger says, the plan is to auction off the pieces and use the proceeds to support the artists and the Arts District.

“It gave us hope that, hey, if we can do this, we’re going to be alright, we’re going to have our galleries to go back to,” says Marquez. “We worked hard for an arts district, we’re not just going to let it slip away.”