Larry Summers Won’t Become the Next Fed Chairman After All 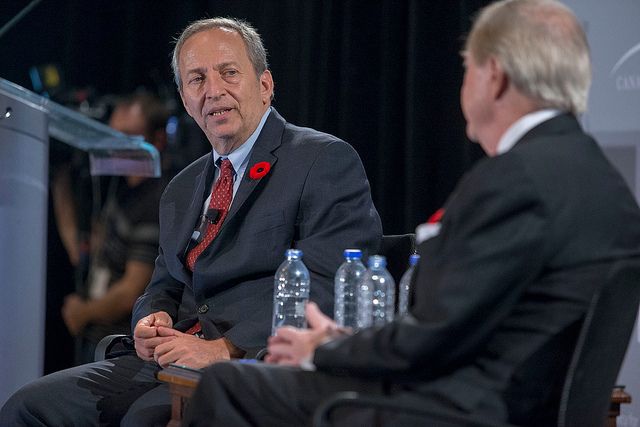 Back in July we felt some trepidation upon learning that Larry Summers, the former Treasury secretary, had become a frontrunner to replace Ben Bernanke, the outgoing chairman of the Federal Reserve.

But it turns out we needn’t fear that the man who helped enable the foreclosure crisis and who, according to at least one of his colleagues, “hates infrastructure” will be making the country’s financial decisions. On Sunday, Summers officially withdrew his name from the running, the Wall Street Journal reports.

“This is a complex moment in our national life,” Summers wrote in a letter to President Obama. “I have reluctantly concluded that any possible confirmation process for me would be acrimonious and would not serve the interests of the Federal Reserve, the Administration, or ultimately, the interests of the nation’s ongoing economic recovery.”

As I’ve previously written, city halls around the country would have had reason to worry if Summers did end up leading the Fed. He was behind deregulations passed in the late 1990s that allowed banks to engage in the sort of risky borrowing and lending that precipitated the 2008 housing crisis.

He still has retrograde views on housing, arguing in an October 2011 op-ed that homebuilders should continue with unsustainable practices that characterized the industry in the early 2000s. And he continues to push for extending tax cuts as means of economic recovery, rather than infrastructure spending.

Bernanke’s term as Fed chairman will end in January. Pretty much everyone expects him to step down — though Bernanke himself has stayed mum on the subject — which set off bouts of speculation this summer. If you’re into that sort of thing, the Journal has a handy graphic with brief profiles of Bernanke’s potential successors, among whom include Fed Vice Chairwoman Janet Yellen, former Treasury secretary Timothy Geithner and economist Donald Kohn, the Fed’s former vice chairman.

I guess the takeaway here is to not heed Ezra Klein’s predictions.

Here is Summers’ letter of withdrawal, in full: