LaHood Steps Down. Time for Speculation! 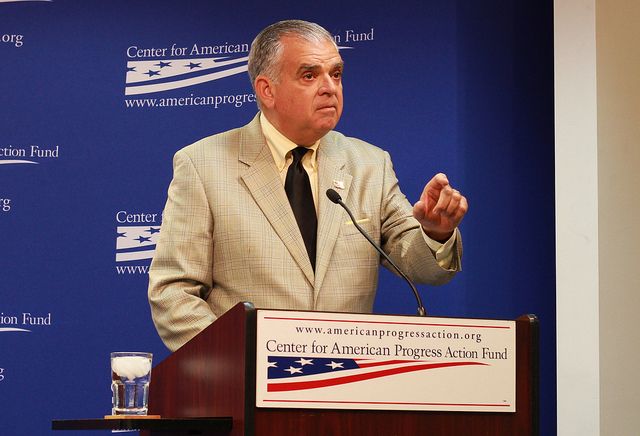 With this morning’s announcement that Transportation Secretary Ray LaHood will not, after all, stick around for the Obama administration’s second term, all the recent speculation about his replacement will soon have its moment of truth.

Any of these people getting the job would, to varying degrees, represent a win for urbanists, though the Associated Press reports that the Senate won’t announce a successor for another two months or so.

“I plan to stay on until my successor is confirmed to ensure a smooth transition for the Department and all the important work we still have to do,” LaHood said in a prepared statement.

LaHood himself was something of a wildcard back in 2008. Many progressives, fearing a purely political maneuver, initially found the appointment of a Republican Congressman from rural Illinois to the nation’s top transportation post dismaying.

But LaHood quickly proved himself to be a high-ranking ally to local public transit systems, as well as intercity rail and even cycling — once prompting a fellow Republican to ask if he used drugs for daring to recommend, two years ago, that the government give cycling and walking equal importance as automobiles in transit planning.

“This is the end of favoring motorized transportation at the expense of non-motorized,” LaHood wrote at the time, in what will likely become a career-defining quote.

LaHood’s farthest-reaching achievement as transportation secretary is the TIGER program. Launched in 2009 as part of the Recovery Act, the program allows local governments to compete for grant money for surface transportation projects, giving priority to those that meet environmental and affordability goals. In an era of spending cuts and tightened municipal budgets, the grants allowed many key advances in public transit, including a L.A. light rail expansion and a New Orleans streetcar expansion, to continue.

Safety also played a central role during LaHood’s tenure, with the secretary pushing for measures to curb texting and cell phone use among drivers, combat airline pilot fatigue and make improvements to pedestrian infrastructure.

LaHood isn’t expected to run for any further public office.