Japan’s Next Nuclear Emergency Will Be Crowdsourced – Next City

Japan’s Next Nuclear Emergency Will Be Crowdsourced 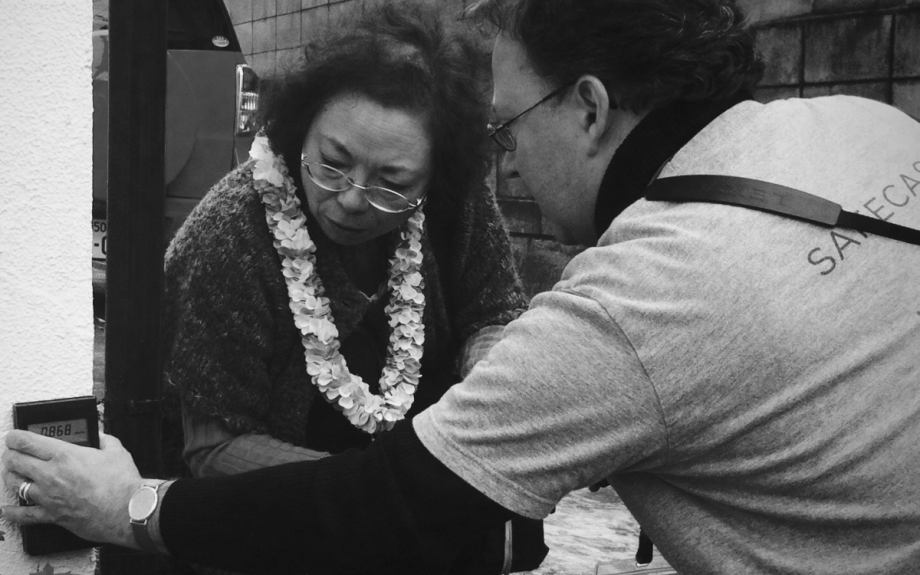 A Safecast volunteer explains how to use a geiger counter. Credit: Sean Bonner Via Flickr

Japan was given just a half-minute window to brace for the devastating magnitude 9.0 earthquake that triggered a deadly tsunami on March 11, 2011. It was just enough time for bullet trains to screech to a halt, runways to close and alerts to be broadcast to the public via mobile phones, radio and television. The warning, beamed from seismic sensors on the ocean floor to relay stations across Japan, was the first set of public data about the disaster.

In the weeks following the earthquake, and the ongoing nuclear crisis in Fukushima, life in Tokyo became dependent on such streams of data. Yet while data from the ongoing aftershocks was publicly available and updated regularly through the Japan Meteorological Association’s (JMA) website, data about radiation from the compromised reactor in Fukushima was almost non-existent. In the absence of any central public source of information, people in Tokyo relied on news reports and Twitter hashtags.

“That’s why I started Safecast,” says Pieter Franken. “I have a daughter here in Japan and I was worried about what was happening… I wanted data.” Surrounded by electronic parts, homemade geiger counters and Safecast volunteers working late into the night, Franken recalls the beginning of his experiences with crowdsourced radiation monitoring. Along with two friends, Joi Ito, director of the MIT Media Lab, and Sean Bonner, a journalist and entrepreneur, he decided there was a need to aggregate the available data on radioactive fallout. In the process, says Franken, they discovered there “was almost nothing.”

The data that was available was either copyright protected and couldn’t be shared, or was meant for scientific research and largely irrelevant to human health. In Tokyo in March 2011, radiation was only measured from a single point: a 22-meter-high tower in Shinjuku, which Franken felt was almost useless, not least of which because people spend most of their time on the ground.

On that day, sensors in Japan’s nationwide nuclear-detection network SPEEDI, which is run by the government’s Nuclear Safety Division, were either turned off or damaged. When the data finally was gathered, it turned out that it was based on incorrect assumptions. And it was later revealed that radiation measurements given to the Japanese government by U.S. forces were deliberately withheld from the public.

Why so much secrecy? One could speculate that Japan and the Tokyo Electric Power Company (TEPCO), which was operating the Fukushima plant, had a vested interest in minimizing the data. It revealed that at best they behaved ineptly, and at worst that they knowingly allowed people to be exposed to large amounts of harmful radiation.

Safecast emerged as an alternative source of radiation data in Japan, a bottom-up approach to risk assessment that now includes 800 geiger counters operated by a network of hundreds of volunteers. It is the world’s only large-scale public database of crowdsourced radiation information and represents a fundamentally new way to monitor disasters and gather scientific information.

A Safecast visualization on a mobile phone showing radiation across Japan.

The organization began with Franken, Ito and Bonner, but is now run by a motley crue (“we’re non-homogenous,” says Franken) of engineers, programmers, hackers, activists, scientists and researchers. This core team is supported by over 400 volunteers, about a third of whom have uploaded radiation data to the Safecast database. There are also a number of organizations that have donated their data to Safecast, such as Japanese mapping company Global Survey Corp., which has uploaded over four million measurements. As of January 2014, over 15,000,000 unique measurements of radiation have been taken.

Safecast’s radiation data is mostly gathered with standardized sensors in the “bGeigie,” a custom-built geiger counter designed by Safecast’s core team through hundreds of iterations. The bGeigie is the standard device used by Safecast volunteers to monitor radiation around not only Tokyo, but also Japan and, more recently, the world. Joe Maross (a.k.a. JAM), who has a background in building radiation detectors, places a cardboard box on the table while we are talking. It’s overflowing with failed versions.

The “bGiegie Nano” is an even smaller iteration that’s run on Arduino, an open-source electronic prototyping platform, and encased in a shockproof, waterproof container. It can be ordered as a kit at a cost of $450 — which mostly pays for a high-quality, industry-standard sensor — and assembled with online guidance from Safecast volunteers. The device is then switched on, and radiation data is immediately stored on an SD card; later, this data can be uploaded to an online database for approval from a team member. “There’s always a human in the loop,” says Safecast volunteer and journalist Azby Brown. If there are unusual measurements at a certain location, other users can visit and record their own measurements to confirm or deny the recorded levels.

It’s also a database that the government has chosen not to acknowledge or use. In 2013, under the instruction of then-governor Naoki Inose, the Tokyo Metropolitan Government created an English website (in addition to its main Japanese-language site) to ease fears about radiation levels in Tokyo in the lead-up to the 2020 Olympic Games. The site shows measurements for radiation in a number of locations, at a range of heights, and also monitors levels in tap water, sewage and in Tokyo Bay. Safecast was not contacted about assisting in this effort.

According to Brown, the radiation levels in Tokyo are currently lower than they were in 1964. He sees Safecast as a reassuring early-warning system for residents, one that will continue as long as its volunteer network can sustain itself and also, perhaps, as long as the specter of Fukushima lingers.

“If the wind had just blown towards Tokyo for a couple of days…” says Brown, thinking back to March 11. “If it had happened,” he says, “and Safecast had existed back then, and we told people… I really wonder…” He stops, reflecting on how the city might have reacted to live information about an approaching radioactive cloud. The chaos that might have ensued would have “made it impossible to evacuate Tokyo,” he says. “We were just very lucky that didn’t happen.”