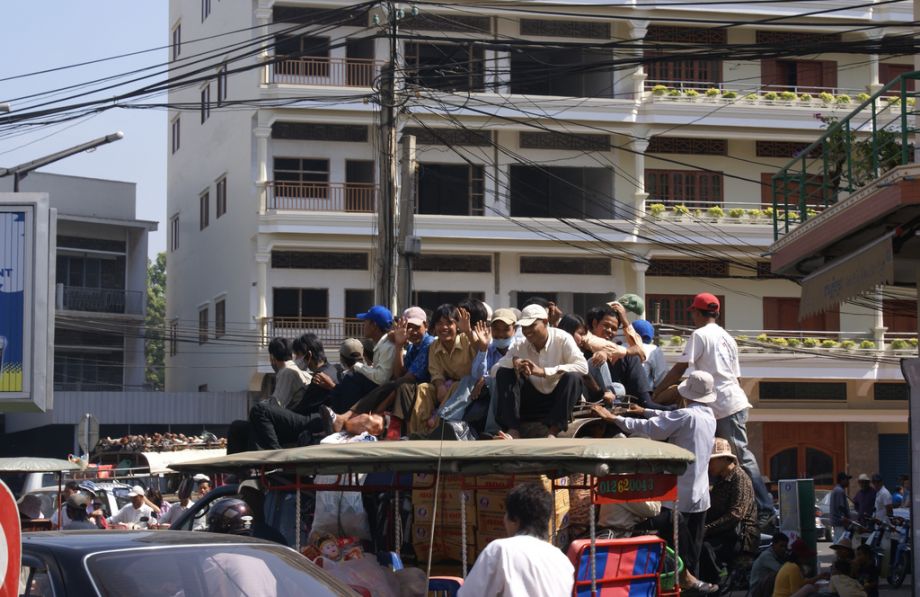 Traffic in the Cambodian capital is, in a word, insane. (Photo by alex.ch via Flickr)

As Cambodia’s economy has boomed over the last decade, the broad French-built boulevards and leafy backstreets of Phnom Penh have become bottlenecks, with giant SUVs parked two- or three- deep, clogging the roads. At peak hour, the center of town turns into a Hobbesian crush of all against all, a gridlock of motorbikes, cars, bicycles and hulking SUVs, each giving no quarter and ceding no unnecessary inch.

Japan has worked to alleviate Cambodia’s traffic woes before, and as the gridlock worsens, is jumping back into the fray with a total overhaul of the capital’s traffic light system. Over the next few years, Tokyo’s development arm, the Japan International Cooperation Agency (JICA), hopes to replace the traffic lights at Phnom Penh’s 69 controlled intersections and add around 30 more, then link the entire system together with a computerized central control station.

Egami Masahiko, a spokesman for JICA, said the current system often creates unnecessary congestion, especially during the early-evening peak hour. “Sometimes intersections just look like chaos,” he said. “It is due to an inappropriate system, and also to ignorance of the traffic rules.” JICA, which has helped improve traffic management systems in Thailand and Myanmar, will do something it has never before done in Asia: redesign and rebuild the city’s entire traffic system from scratch, installing a new “smart” system of signals that will be synchronized and centrally controlled. Starting in 2016, thirty new intersections will be fitted with lights. CCTV cameras will be installed at each to monitor the flow, enabling traffic operators to make real-time changes depending on the flow of traffic.

Masahiko said that while the overhaul was just one small step in solving Phnom Penh’s traffic problem, it could lead to a drastic reduction in snarls. “To divert the traffic in an effective way, by the new traffic light system, we can make maximum use of the road capacity of Phnom Penh,” he said.

But how far will the new project go toward addressing the city’s stubborn traffic problem, and forestalling the gridlock experienced by cities like Bangkok and Jakarta? The challenge is that, in many ways, Cambodia’s anarchic traffic reflects the country’s broader social problems. Like the country as a whole, traffic operates less by the existing laws (which are ignored by just about everybody) than by a loose convention: small gives way to large, or pays the consequences.

As a result, Cambodians see little benefit in following road rules or making allowances for other road users. Large 4WDs roar down narrow back streets, horns blaring and headlights flashing. People drive drunk, or while texting; the “right” side of the road is whichever side is more convenient to a particular driver at any given moment. Ear Chariya, an independent road safety expert based in the Cambodian capital, described a recent study he conducted while working at Handicap International, which found 70 percent of road users don’t even understand basic traffic signals.

He added that fixing Phnom Penh’s traffic lights is just one small step towards controlling the city’s unruly traffic, but it’s an important one. The next step would be to couple it with other improvements like infrastructure upgrades, rational parking policies, driver education and proper law enforcement. “Traffic control is just one element in reducing traffic congestion,” he said. “The core problem is, how do we address and reduce the number of vehicles on the road?”

This may be hard; Cambodians are keen drivers, so much so that the 500-riel note even features what appears to be a tiny Porsche sports car. But Chariya, who walks or cycles when he’s not driving his secondhand Toyota Camry (the common pigeon of the Cambodian road) said the city’s promotion of public transport, which got off to a promising start earlier this year with a JICA-funded public bus trial, would at least give people another option. “When people can access public transportation,” he said, “they don’t use cars a lot.” Cambodia’s increasing numbers of car owners can only hope he’s right.